Another Period Dress Meeting of the 21st Michigan Civilians

On Saturday, November 14, we had our fall meeting for the Civil War reenacting unit I belong to. Since I've become the Civilian Coordinator of the group a number of years ago, I have insisted on spring and fall meetings. The one in spring, usually held at my house, is to pump up the membership and prepare for the official start of the season, while the one held in the fall, which is usually at another member's farm, to speak on the good and the bad of the slowing reenacting season. And there is always a member or two that might also speak about something historical (this meeting a couple days ago dealt on seasonal foods). I like to pull members (sometimes without forewarning them!) from the 'floor' to share what knowledge they may have on a particular subject. Inclusive AND informative - that's what I like! 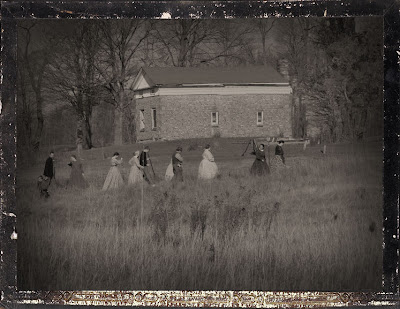 The November meeting: 21st Michigan members take a break to explore the Schroeder farm in Hillsdale Michigan
Since I began having these meetings some four years ago, I have insisted that the attendees dress in period clothing, try to serve period (hopefully, seasonal) food, and, at times, to maintain a first person persona.
At this year's fall meeting, we had a few brand new members join us and, since they had no period clothing to wear as of yet, they wore their modern clothing. But, they enjoyed being with all of us "Victorian wannabees" and were given the opportunity to ask whatever questions they had, examine our garments closely, and listen to and took plenty of notes during the speeches.
And, of course, after the morning meetings were over, we had the whole afternoon to enjoy each other's company
And that's one of the main reasons why I insist on period dress meetings - we are given the chance to visit as our ancestors may have; we are allowed to be ourselves - mistakes and all - without the public around to "catch" us in off moments. Generally, we stay away from 20th century speak - it helps to be in a historical or country setting as to give the impression you are in another time. Even though I live in a modern (1940's) house, our back gathering room (also known as 'The Greenfield Village Room') is very period, and while the guests are over we keep it candle and oil lamp lit. 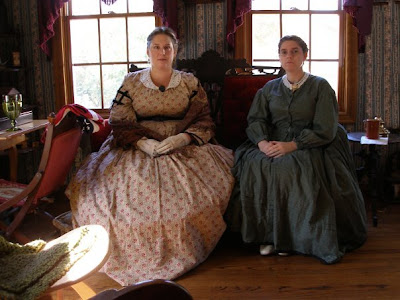 21st Michigan members relax in my 'Greenfield Village' room during the spring reenacting meeting
And the Schroeder's farm (see the photo at the beginning of this entry) was built in the 1840's...well, the front half anyway. And they are surrounded by farmland. Very pastoral.

Might I suggest to any reenactors to try the same with the group you are in - - it's almost (I said, almost) as much fun as an actual reenactment!
In some ways, it is!
Posted by Historical Ken at 12:42 PM