Had You Been In Gettysburg the Week Before the Battle…

If you love the Civil War era and have never been to Gettysburg, you should make it a point to visit. To walk amongst all of that wonderful history just gives one chills, and seeing the actual historic buildings and homes that are still there, and walking onto the fields where so many men died during the battle is, simply put, a feeling words can't describe.
But, I could feel another story in the air there...something more that had to be told aside from the battle itself. During my last couple of times in Gettysburg I had taken home tours and began to search out books - books that told another part of the story that one rarely hears about.


One book in particular is very well written: Firestorm at Gettysburg: Civilian Voices June-November 1863 by John Alexander and Jim Slade. It is filled with quotations and stories as told by those who were there: Tillie Pierce, Sarah Broadhead, Sallie Meyers, et al.
After reading this book, the streets of Gettysburg had a whole new (old?) feel to them for me. I imagined all that took place here - right where I stood as the quotes from actual eyewitnesses swirled around my head. The constant flow of traffic disappeared and a few horses with and without carriages replaced them, the souvenir shops magically became the homes, livery stables, and other 'ancient' businesses they once were.
And old Gettysburg came back to life.
I should like to present here a few of the recounts and journal entries covering the weeks leading up to the battle. One must remember that there was much excitement that took place in the days and weeks before the bloodshed befell the borough.


SARAH BROADHEAD: “June 15, 1863 – To-day we heard the Rebels were crossing the river in heavy force, and advancing on this State. No alarm was felt until Governor Curtis sent a telegram, directing the people to move their stores as quickly as possible. This made us begin to realize the fact that we were in some danger from the enemy, and some persons, thinking the Rebels were near, became very much frightened, though the report was a mistake.” 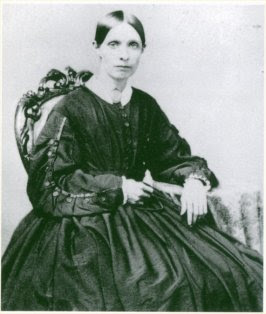 Sarah Broadhead
SALLIE MEYERS: “June 20, 1863 – Some cavalry from Philadelphia who armed and equipped themselves came to-night. They are entirely and altogether volunteers.”

SARAH BROADHEAD: “June 23, 1863 – As I expected, the Rebels have, several times, been within two or three miles, but they have not yet reached here. Two cavalry companies are here on scouting duty, but they can be of little use, as they have never seen service. Deserters come in every little while, who report the enemy near in large force.”
NELLIE AUGHINBAUGH (while learning a milliner’s trade at the home of Mrs. Martin): “June 26 – Mr. Martin excitedly rushed into the work room, exclaiming that the Rebels were coming. ‘They’re at Cashtown now. Send the girls home,’ he told his wife. Several of the girls stopped immediately and left. I was working on a bonnet that Mrs. Martin, who was very particular, had made me rip twice that day and start over again, and I said ‘I’m not going home until I finish this bonnet, not if the whole Rebel army comes to town.’
Once more, Mr. Martin came running in and, hurrying over to me, he grabbed my work from my hands and exclaimed, ‘Go home, girl! The Rebs are at the edge of town.’
I did. As I reached the center square, the Rebels were riding into it from the other direction with yells and cheers. I was frightened and ran all the way home. I had to cross the square and go down Carlisle Street. When I reached the house, Mother was standing in the doorway, ringing her hands.
‘My God, Child! Where have you been?’
Never in my life had I ever heard my Mother use the Lord’s name in that way, and I always told her that she frightened me more than the coming of the Rebels because I thought she had suddenly lost her mind.”
TILLIE PIERCE: “June 26 – What a horrible sight! There they were, human beings, clad almost in rags, covered with dust, riding wildly, pell-mell down the hill toward our home, shouting, yelling most unearthly, cursing, brandishing their revolvers, and firing right and left.” 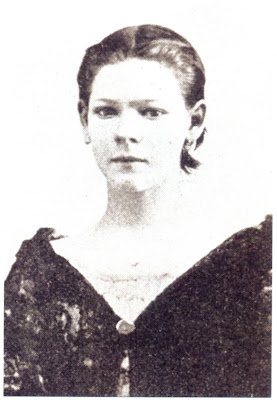 Tillie Pierce
SARAH BARRETT KING: “June 26 – My father was sitting by a window, busily engaged reading a daily paper, little dreaming the Rebels were so close by. I said to him, ‘Here they come.’ He asked, ‘Who?’ I answered, ‘The Rebs, don’t you hear the yell?’ And he looked out and saw them in pursuit of Captain Bell. He said, ‘Bring the children in and close the door.’ I said, ‘No, I want them to see all they can of this’ and remained on the porch of the house.”
SARAH BROADHEAD: “June 26 – We all stood in the doors while the cavalry passed, but when the infantry came, we closed them, for fear they would run into our houses and carry off everything we had, and went upstairs and looked out of the windows. They went along very orderly, only asking every now and then how many Yankee soldiers we had in town. I answered one that I did not know. He replied, ‘You are a funny woman; if I lived in town I would know that much.’”
ANNA GARLACH’s (speaking of her Grandmother: “Some of the (Rebels) asked her what she thought the Rebels were like (before they came to town), whether they had horns. And she replied she was frightened at first, but found them like our own men.”
SARAH BROADHEAD: “The Rebel band were playing Southern tunes in the Diamond (town square).”
HARRIET BAYLY: “June 29 - Looking west at night we could see camp fires along the mountain side eight miles distant, and it seemed as though the enemy was there in force.”
HARRIET BAYLY: “June 30 – The whole air seemed charge with conditions which go before a storm; everybody anxious, neighbor asking neighbor what was going to happen and what will we do if the worst should happen?”
MICHAEL JACOBS: “June 30 – (I) saw General John Buford’s Union cavalry division, including two brigades, riding into Gettysburg from the Taneytown Road, on the south. He flung one of his brigades directly north, along Washington Street; the other he dispatched to the west along the Chambersburg Road.”
TILLIE PIERCE: “June 30 - A crowd of us girls were standing on the corner of Washington and High Streets as the soldiers passed by. Desiring to encourage them who, as we were told, would before long be in battle, my sister started to sing the old war song ‘Our Union Forever.’ As some of us did not know the whole of the piece we kept repeating the chorus.”
SALLIE MEYERS: “June 30 - How they dashed by! Their horse’s feet seemed shod with lightning. Along the street we stood – all the girls and women of the town. We had prepared food in advance, and had baskets and trays in our hands. They came by, snatching in their hasty passage whatever they could lay their hands on – sandwiches, pieces of pie, cold meat, bread, cakes, cups of coffee, and bottles of water.
The eyes of the soldiers blazed, they smiled and some joined in the song. It was the last song many of those brave men ever heard, and the bite we gave was the last many ever ate.” 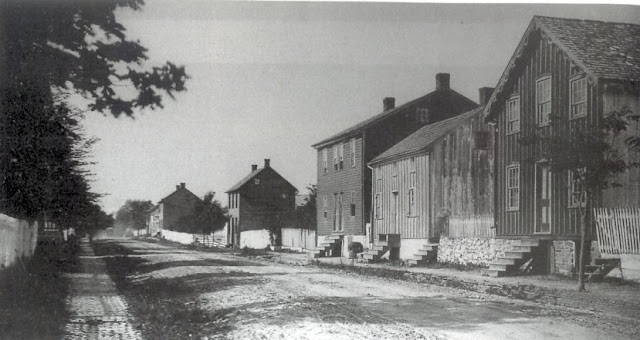 Period photograph of Washington street near High street where Tillie Pierce and the other girls of Gettysburg sang patriotic songs and passed out food and drink as Gen. Buford’s soldiers passed by on June 30, 1863.

SARAH BARRETT KING: “July 1 – I heard two cavalrymen talking and one of them said, ‘Well the ball is about to open.’
SARAH BROADHEAD: “July 1 – I got up early this morning to get my baking done before any fighting would begin. I had just put my bread in the pans when the cannons began to fire, and true enough the battle had begun in earnest, about two miles out on the Chambersburg Pike. What to do or where to go, I did not know. People were running here and there, screaming that the town would be shelled.”
------------------------------
And thus began the battle that would last three days proper and for infinity in the history books. Little did the folks realize at the time just how significant the time and place in which they were living truly was.

This post presents only a hint of the journal and diary entries from the Firestorm at Gettysburg book. There is so much more before, during, and after the battle.
It very much made me feel as if I were there experiencing the excitement through their eyes. Time travel indeed...

I've never been to Gettysburg but I'd certainly like to! Thanks for writing this, BTW how's the book coming? We miss reading it... :-)

Thanks so much - - - Gettysburg truly is my favorite place to visit!
My book...I haven't written anymore but I am getting the "itch" so it may not be too long!
Thanks for asking.

Looking forward to seeing what you come up with. :-)

Great post! Can I ask where you got the old pictures of the town of Gettysburg? They're awesome. I have written a book that I will soon be publishing. Part of the book takes place in Gettysburg at the time time of the war. My book cover artist is looking for a photo of Gettysburg such as these that is public domain, or that we can have permission to use, in whole or in part. Thanks!