I Believe A Change Is Gonna Come

Has anyone else noticed the change that seems to be happening in the reenacting/living history circles? The change I mean is how the living history community is striving for more authenticity and accuracy in presentations than I have ever seen.
I've noticed.
And I am very happy to see the affect it has had on those who have been adverse to this change.
A few months back I wrote of an event (An 1860's Village Celebration) that will take place this July near Flint, Michigan at a place called Crossroads Village, a small Michigan-based open-air museum that has around 30 mid-19th century structures.

Crossroads Village
The hostess of this event is striving for an immersion experience for all who participate, and thusly will come as close to a time-travel experience as can be done. (It also helps that Crossroads is as authentic a period village one can get around here!)
To make an immersion experience like this happen, participants are chosen rather than just sign up. In other words, in order to take part, each hopeful has to send in an application explaining their presentation (with photograph) and then a jury of three people will look it over and either give a yay or a nay.
Sound harsh?
Some may think so.
But, for those of us who take living history seriously, it just doesn't get any better. (unless, of course, we could actually live in the historical houses for the entire weekend....hey! I can dream, can't I?)
There has been quite a bit of talk about this event amongst the living historians in our area - all positive, I must say. Even those who were not chosen - or decided they were not accurate enough to even try to be accepted - think this is really going to be something.
Probably the neatest thing that I have witnessed due to the excitement of this particular event is having some of the living historians who generally do not put their all into this 'hobby' suddenly try to improve their authenticity; they're realizing they will be missing out on a very cool experience and know they must improve to take part next year.
But, it's not only at Crossroads that the living history bar will be raised; last year, the Jackson, Michigan event held in August created a makeshift town called Harrisonville Landing through the magic of false-fronts. This pretend town included a postmster, a town hall, a millinery shop, and a Christian Commission (among others).
And Harrisonville Landing will rise this year as well, even larger than last year. 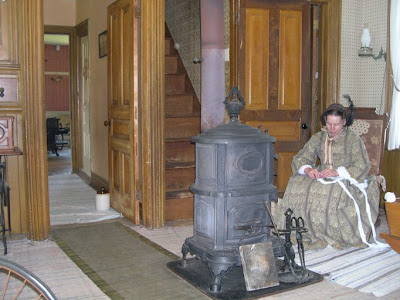 Waterloo Farms
Then there are two other events which has allowed a few of us the use of actual 19th century homesteads: Charlton Park in Hastings, Mi, and Waterloo Farms in Waterloo, Mi.
I believe that those 'reenactors' who feel they can get by with just wearing makeshift clothing while sitting around the campfire all day looking bored will become a thing of the reenacting past (if you'll pardon the pun!). I believe that the call for accuracy and authenticity will become louder, and those that do not heed that call will be left behind.
That means eventually no longer seeing modern sunglasses, plastic cups (or plastic anything!), prom dresses, tennis shoes (yes! tennis shoes!), and other 20th and 21st century incidentals lying about, ruining others' time-travel experiences.
That means more first person (with a touch of 3rd person thrown in as to not offend anyone) and presentations (instead of camp-sitters) to make the past come alive before the visitor's eyes.
That means more research to ensure authenticity and accuracy is at the forefront in whatever we may be doing.
That means striving for correct period clothing - especially in the men's department - will take precedence. 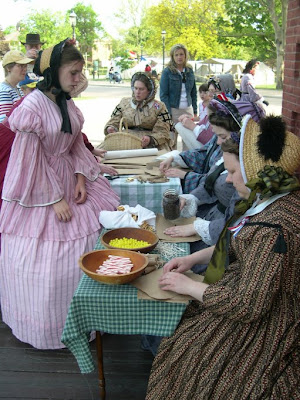 The Michigan Soldiers Aid Society preparing packages for soldiers
At least, that is my fervent hope.
As I said before...I can dream, can't I?

I agree! I have noticed a definite trend towards increasing authenticity lately in our local reenacting circles. Mostly on the military side of things, but it has been wonderful beyond words to see more women wearing corsets, correct dresses and bonnets (instead of the ubiquitous craft straw hat decked out with poly ribbon and plastic flowers!).

Sarah Jane - I love your description of "ubiquitous craft straw hat decked out with poly ribbon and plastic flowers".
Hilarious! But, an unfortunate truth as well!