A few years back I discovered that Dept. 56 has been putting out ceramic lighted houses of the historical structures of Colonial Williamsburg. This is the first time, to my knowledge, that the company is doing an actual historic village.
Since discovering Dept. 56 back in 1989 I have become a fan - a collector - of the small lighted houses. Though my main collection is of the Dickens Village (click HERE to see my post on that from 2011), I have ventured off a bit the last few years to collect other villages such as the Sleepy Hollow series.
Most of the houses in the various collections are designed from an artist's imagination seemingly based on nostalgia, though a number of them are copies of actual structures, especially in their Snow Village series, which tends to recreate Americana from the 1940's and '50's.
And the Dickens Village is very loosely centered on old London.
V-e-r-y loosely.
Though the nostalgia thing is pretty cool, real American history was not to be found.
Until I found this cellection (which, by the way, is now out of print, from what I understand).
In 2010 Dept. 56 came out with the Colonial Williamsburg collection. How cool for a historian like me! To be honest, I can't afford the prices being asked, but searching daily (with patience) on the internet helped me to locate a few of the houses at, in many cases, half off the original asking price.
Now, just so you don't think I am blindly purchasing this set by name alone I did a bit of research on the original structures to see how closely they resembled their ceramic counterparts.
Perfectly! They matched perfectly!
So, what I have here are photos of the original buildings as they sit in Colonial Williamsburg followed by the Dept. 56 miniatures I had purchased.
You be the judge:


Next up we have a building that is not located in Colonial Williamsburg but in Philadelphia. I am including it in my Williamsburg collection for two reasons: 1) because it fits the colonial look of Williamsburg since the original buildings were made around the same period. And 2) because there is no other historical collection from Dept. 56. So, what else was I supposed to do?
Don't worry, I do let folks know about it when they see my set up, just as I am doing now.


And here are some "scenic shots" of my historical village:


So? Pretty neat, huh?
I got nearly every piece available, plus some, so I am pretty happy with my year-round display.

By the way, it must be noted here that the photographs of the original buildings of Williamsburg are not mine; I took them from books that I own.

I wish Dept. 56 would team up with Greenfield Village and do replicas of the buildings there. I would love to have a ceramic lighted house of the Daggett Farm, Firestone Farm, Noah Webster's Home, The Wright Brothers and the Ford homes...

One of my most favorite houses inside the open-air museum of Greenfield Village is the Daggett Farnhouse.
What's a Daggett Farmhouse you ask?
Why, THIS is a Daggett Farmhouse:
It is a structure built around 1750 in the popular-at-the-time saltbox-style. It was painstakingly dismantled from its original location in Connecticut and relocated to the historic Greenfield Village open air museum in Dearborn, Michigan in 1977, opening to the public by the following year.
There are now presenters who work here while wearing 1760's period farm clothing. They cook and do chores from the colonial era to give a wonderful impression of what life was originally like in this home during that early time in our country's history.

A friend of mine and his fiance were at a local collectables store recently and made sure they stopped by to tell me that they had seen a lighted ceramic Dept. 56 Daggett-style house for sale there. Of course, I went to the place myself to see it.
Yep - there it was! And it was beautiful. In fact, there were four of these houses sitting on the shelf, but they were considered used  (they're out of print from maker Dept. 56) and had no box or packaging of any kind.
Unfortunately, they were also rather pricey, so I had to pass on purchasing one.
I thought about how cool the lighted house looked every-so-often. I really wanted to get it, but money was tight.
However, after some time (and some money I acquired by selling a few books I didn't want), I decided to see what I could find on Ebay.
Voila!
There it was! It was listed under the title "Home Sweet Home."
And guess what? With it, in the same box, was a windmill. A windmill that looked suspiciously like the Farris Windmill.
It wasn't being sold that way at the store - - - hmmm...something's amiss here...
No matter, the price for both - the house and the windmill - in the original packaging was less than half the price of just the house itself from that collectables store.
I bought it off Ebay. (That collectables store I went to was kind of a rip off, wouldn't you say? In more ways than one.)

It took only a few days til my package arrived - and here they are together: 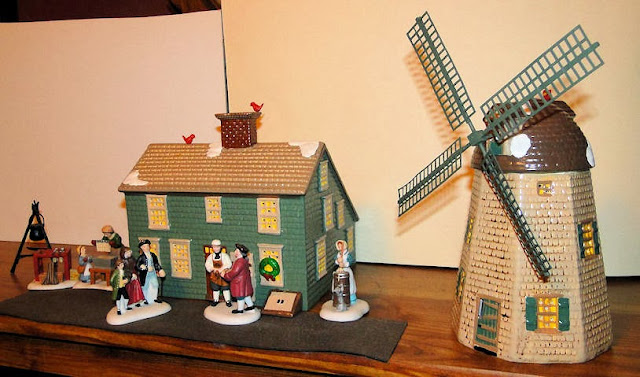 I put some of my Colonial Williamsburg figurines around it to give it a more "3-dimensional" look - to sort of bring it too life.

And this is how the two structures look together as they sit inside Greenfield Village: 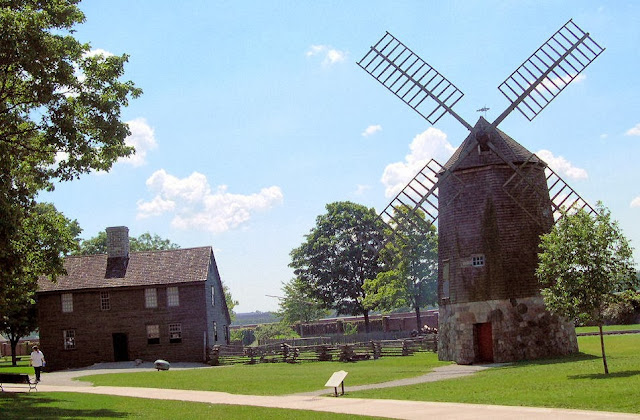 These two Dept. 56 ceramics were introduced in 1988 and were discontinued in 1991.
The original Daggett House was reconstructed in Greenfield Village in 1977 and opened to the public in 1978, while the Farris Cape Cod Windmill was reconstructed in the Village in 1936.
They are v-e-r-y close in comparison, especially considering they came in the same box.
It's almost as if...hmmm...do you think...? Dept. 56's website says that the house is "Inspired by the East Hampton, NY historic landmark home of John Howard Payne, composer of 'Home Sweet Home'."
Is there a windmill near his house?
Let's look and see:
Wow! Now this is really pretty awesome!

So now I sort of have my own personal corner of Greenfield Village as well as the landmark historical home of the "Home Sweet Home" composer John Howard Payne all in one on my shelf.
I think it's kinda neat.

Until next time, see you in time...

Oh wow! That is wonderful! Those are definitely great replicas. And for you, the historian that you are, to have a collection of those? How perfect is that? I do hope good ol' Saint Nick is good to you this year!You better get that list ready! Gina

I didn't know that Dept 56 made a village with historical structures. My daughter and I collect a new piece to our Christmas village every year. It is fun to put the village together and get all the accessories to make a realistic looking village. It would be fun to have a village with some historical significance. http://www.feeneys.com/Dept56_MAIN.shtml

Beautiful pictures and some amazing replications of houses. I have been looking for such beautiful houses in williamsburg northside, but i must say, it's quit a task.

Dept 56 has made a Monticello! Easy to find online with google... not cheap but definitely cool...