Our first real reenactment of the season was a washout...or was it? 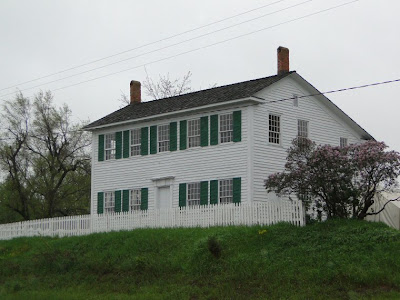 The 1836 Walker Tavern
The Walker Tavern Civil War reenacting event is a high point for those of us who follow the Michigan reenactor's calendar, not only because of the historic area in which it takes place, but it's also the first real reenactment of the season. Unfortunately, this year it was a wash out. Well, not totally - Saturday was not too bad, although the ground was mucky. Sunday, however, was a total wash. It began raining Saturday night and didn't stop until mid-afternoon Monday.
What really bummed me out was the idea that since I was only going to go for one day of the two-day event this year, I chose the day the weatherman told me it was going to be the better of the two days.
Silly me, believing someone who gets paid for being wrong!
The ride out there was beautiful, even with the rain. To drive along the same path that so many rode upon by way of a stage coach 125+ years ago really stirred the historian in me. I paid close attention to the old buildings as we drove through the small villages that dotted our way along this old Chicago Road, knowing that travelers from another age saw the very same structure that I was seeing at that moment. That right there was well worth the drive - even with $4.15 a gallon gas prices.
It wasn't long before we made it into the historic park area of the Walker Tavern.
It was still raining...
We visited with friends tent to tent, standing under the flies out of the rain. Then came the announcement that the event was canceled. I've never heard of an event being canceled due to rain. I suppose it was because the land was part of a state park.
Anyhow, before they closed up the tavern, which was built in 1836, I made sure to take the opportunity to have some historical fun with my camera. With no patrons around, I was able to have the young lady who portrays our domestic at most of our reenactments pose as if she was a worker inside the beautifully restored building. 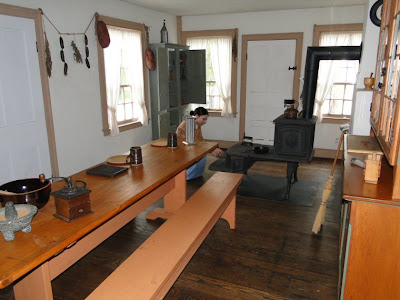 Our domestic prepares the cook stove 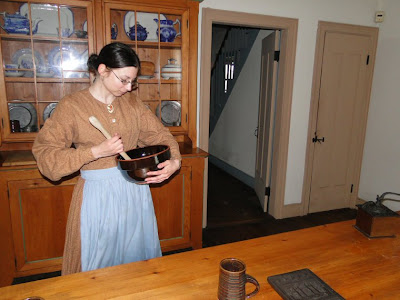 She prepares the batter as the stove heats up 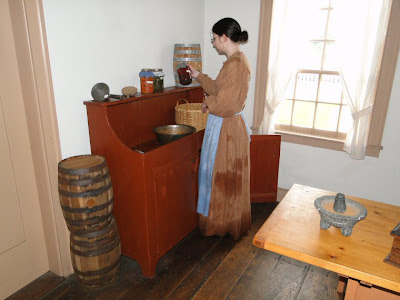 And, she pulls some preserves to add flavor 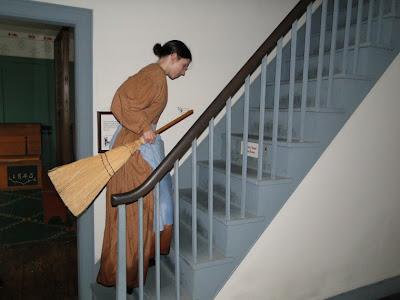 But, she mustn't forget to clean the upstairs bedrooms! 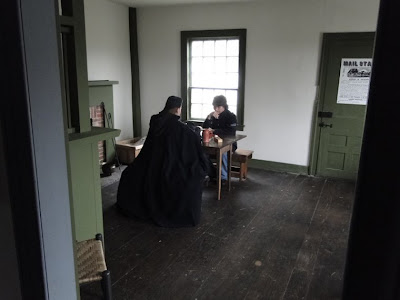 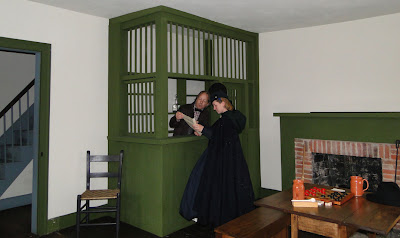 As you can see, we had a fine and fun time no matter what the weather. When you have lemons thrown at you, you make lemonade (as the old saying goes). I have been looking forward to our reenacting for too long to let something like a little rain spoil it for me.
Okay, a lot of rain!
Still...I'd rather have rain at an event, especially at an event where I can go inside a period structure and be with my family and friends, than be surrounded by modern garbage.
Because remember, it rained in the 1860's, too.

Glad you had a wonderful time despite the rain!! Looks like you had fun and those are great photos :)
Thanks for sharing!

ENDLESS rain here too, Ken...UGH! Great photos! Hopefully your next event will be on a nice sunny summer day! We are planning a 1700's 'English Tea picnic' in 18thc. clothing, over in York Maine this month...Just waiting for a good, warm Sat. or Sunday!!

Trish - Thanks for the kind comments. I appreciate it.
Mary - I always look forward to seeing your 18 c. living history photos. We've been stuck in a weather-rut for too long.

At least you made the most of what you had. Great idea to take some historically accurate photos.

I've often wondered what people did with drenched, wet, muddy clothing back then. If it were made of wool and natural materials, how did they manage to clean it without dry cleaners or special stain removers? or you reenactors, the cost of some of your clothing would certainly discourage some, who wouldn't want to ruin such expensive clothes! And the ladies with their lond dresses... I can't figure out how they EVER kept the bottoms clean, even without rain or puddles!

Pam, the ladies' everyday wear clothing (their day dresses) did get pretty sruffy at the bottom. In fact, they would add extra fabric because the bottoms would drag along the road or street.
I should do a posting on washing clothing during the 1860's. It's pretty fascinating stuff, although they would think I was nuts for being fascinated with all that hard work!