An Afternoon in the Parlor

There is a period during the winter and early spring months when there is so little going on for those of us who do living history. The big events here in the north country tend to begin in May and, depending on how extensive your involvement, usually end in the fall or, at the latest, around Christmas.
It doesn't help that we, as civilians, tend to be tied to the military end of the reenacting community. Unless the boys in blue (or gray, whichever the case may be) are going to an event, there are few chances for civilians to time travel as well.
That attitude seems to be changing, however, at least in my neck of the woods; over the past couple of years, we in the civilian portion of the 21st Michigan and in the Michigan Soldiers Aid Society (MSAS) have stepped up to the plate to create our own events - events where we make the attempt to give an immersion effect that sometimes can't be done at a full-blown Civil War reenactment. 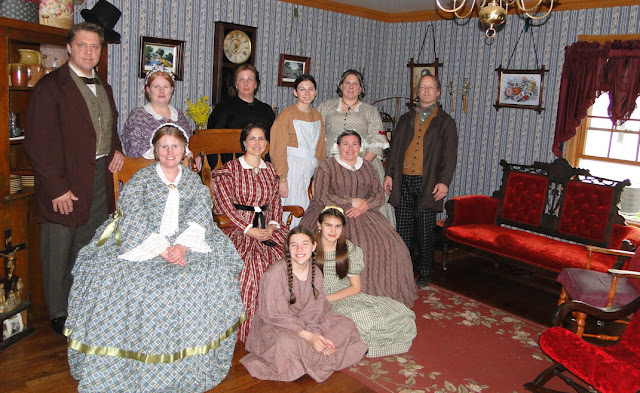 Very recently, eight members of the MSAS came over to our home to participate in spending an authentic afternoon in an 1862 parlor. We have a large period-appropriate room in our house, and since opportunities to reenact in historical homes are months away it was only natural to take advantage of what was available.
Now, I've done this sort of immersion thing before, though, in nearly every case, modern-isms, such as the visiting public, having conversations about up-coming reenactments or our (modern) occupations, or even hearing the sounds of cell phone ringtones, would creep in. It can, at times, be very difficult for groups to stay immersed in another era for more than a few minutes without having the 21st century rear its ugly head; usually the modern-isms mentioned "remind" us that we are only living historians and not really 'there.'
But not this time. We truly made the attempt to be "there."

To begin with, I had a sign placed on the front door of our house stating

~SERVANT ENTRANCE~
GUESTS PLEASE ENTER THROUGH BACK DOOR
for that’s where our parlor is located. To walk through our modern home with its modern conveniences (we truly are 21st century people you know!) to get to the period parlor would have taken away the effect I was striving for; I wanted this to be as modern-free as I could possibly make it.
As each guest would knock upon the door, our domestic servant, Carrie, would answer it and allow them to enter and take their wraps, hats, and bonnets. Carrie would then remove herself into the kitchen where she was preparing our dinner. We had a servant's bell and would ring it whenever we needed assistance. For instance, I would ring the bell and Carrie would come to me:
"Sir?"
"Mrs. Morgan would like a glass of lemonade."
"Yes sir." 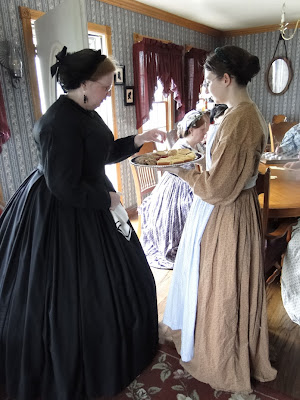 A slight curtsey then off to do as she was told. She also served us our dinner, brought desserts out on a tray and took it to each guest, and cleaned up after us. And this continued throughout the afternoon. Although it was a bit awkward initially, we both fell into our roles quickly, as did the guests.
I must say, Carrie did a wonderful job!
As for the rest of us, we enjoyed period conversation centering around numerous topics; on this particular day the weather was very cool indeed - quite different from the summer-like temperatures from the previous week - and Mrs. Root spoke of her arduous journey by carriage to our home, and how the cold made her joints feel "as stiff as a corpse!"  Mrs. Krewer spoke a bit on women's rights, the War and our concern of how long it may last, and even a bit on the recent wave of immigrants entering our country. The other women didn't seem to have much of an interest in these men's matters, however, and soon turned their attention to Mrs. Schmidt, who began to read sonnets from a book on Shakespeare. 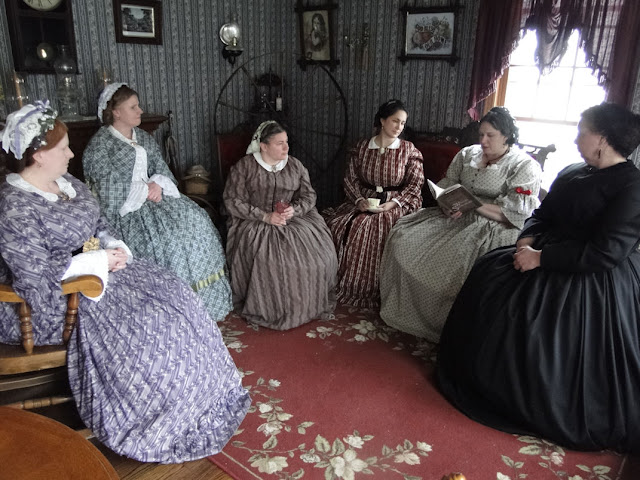 When Mrs. Schmidt was done, I pulled out the guitar and everyone joined in as we sang popular parlor songs such as Nelly Bly, Hard Times Come Again No More, Aura Lee, Some Folks Do, and Wayfaring Stranger. The ladies all sang beautifully to my guitar playing. 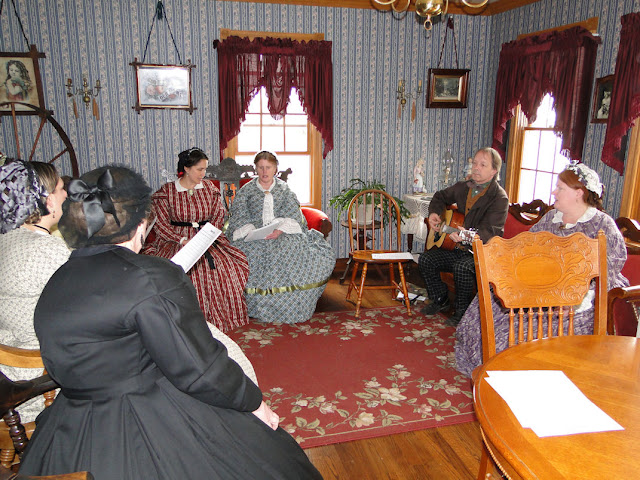 Afterward, a few of the ladies enjoyed playing the ever-popular card game known as Wist. 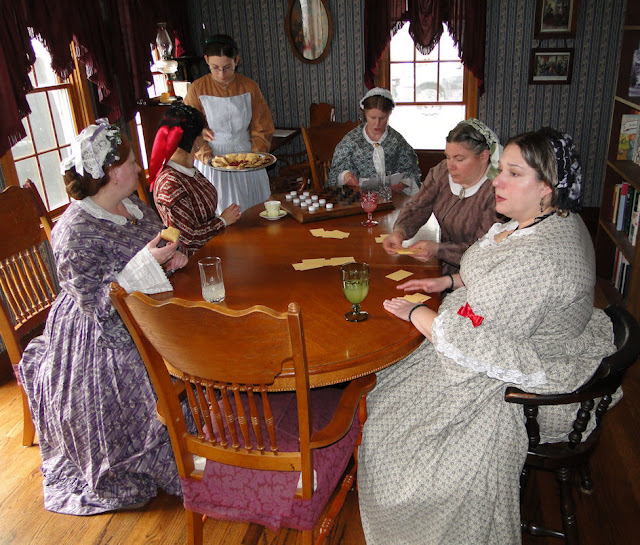 The two youngest of our group played with a toy that sold very well in England - a sort of cardboard puppet show that included multiple set changes and a script they were to follow. 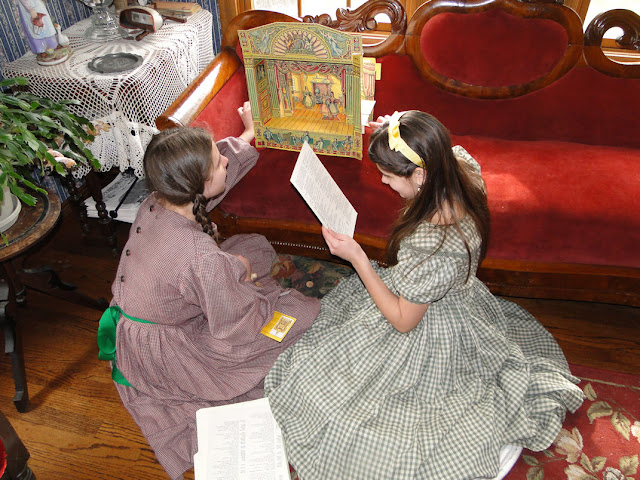 This kept the young ladies busy for quite sometime!
My wife also showed interested parties the pleasures of spinning upon a spinning wheel. Oh, she knows that in the city this craft is considered old-fashioned, but she enjoys the relaxing effect it gives her after a particularly strenuous day. 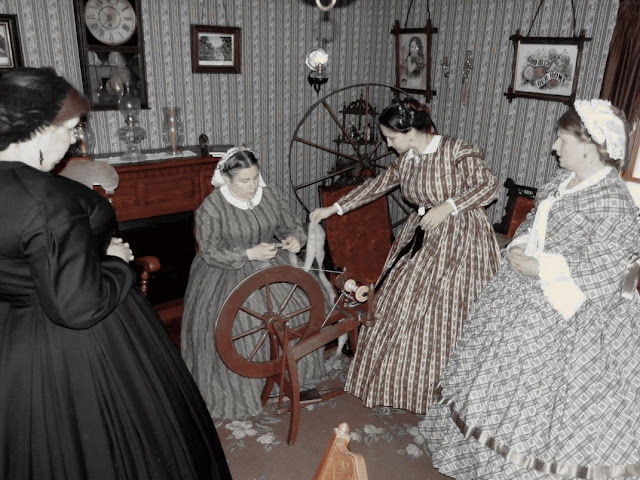 Once dinner was served, eaten, and the table cleared (Carrie was very efficient in her serving and clearing - we are lucky to have found such a fine domestic!), Mrs. Smith had everyone help in preparation of the ladies quilting bee. The Ladies Aid Society are planning to make quilts for our boys in Blue and there was plenty of preparation needed before the project could begin. 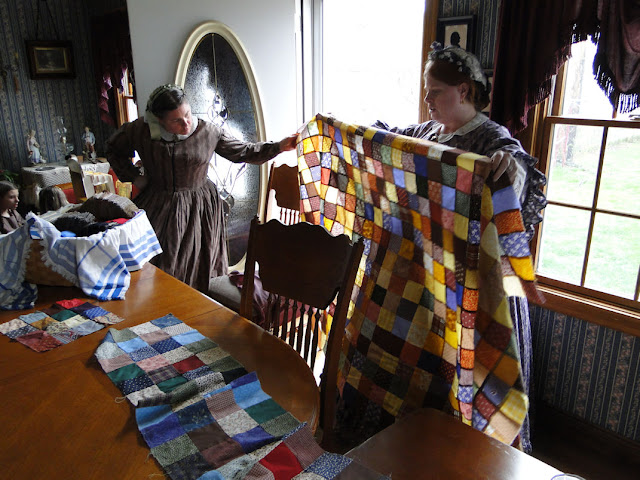 By the time the quilting preparation was completed, the hour had come for everyone to take their leave. It was a shame that the afternoon went by so fast, for it seemed that we were all really getting the feel of 1st person, which seemed to come more natural as the afternoon went on.
We took a couple of group photographs for posterity and then *poof* we were back in the 21st century. 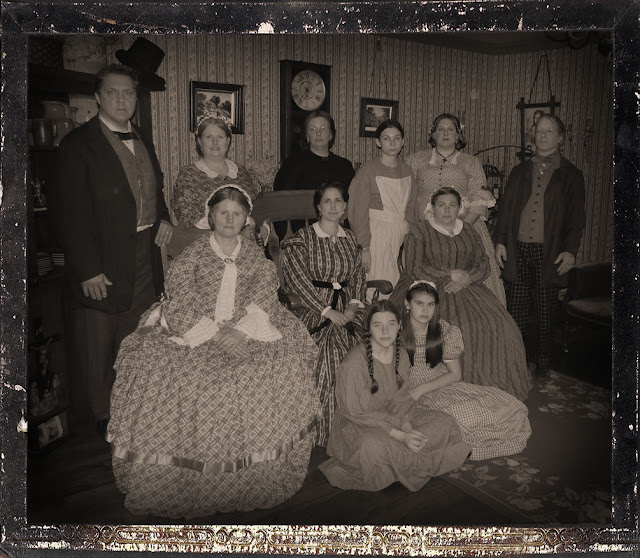 I am particularly proud of our domestic, Carrie, because, well, where most women want to wear the beautiful dresses, Carrie enjoys dressing as a girl in a very real profession of the time; it's not every girl that is willing to become a servant for a day. My wife and I are very lucky - blessed! - to have found such a willing participant, for Carrie actually portrays our domestic at a number of events throughout the reenacting season (here are three posts which features her from last year):
Christmas at Historic Fort Wayne
Charlton Park - Where the Past Comes Alive
and It Rained in the 1860's, too!)
By the way, before they left, our guests gave Carrie a round of applause for the fine servant work she did. And she did work. My wife and I, in a previously agreed-upon 'payment,' took her out to eat at a nice restaurant afterward (no, not Big Boy's!) and we enjoyed recounting the day's activities.


It's good to have living historians who are willing to raise the bar and to participate in very easily put-together "events." The membership of the Michigan Soldiers Aid Society (as well as my other unit, the civilians of the 21st Michigan) do such a tremendous job in bringing the past to life as authentically as we can. It's not often we can do something solely for our own want rather than for the public. And to do so without the public around, to me, shows that we do take our fun quite seriously.

Our group, Civil Folks, also meets here at our home where we have a cookhouse complete with woodburning stove. It is very primitive and our group interprets the lives of lower/middle class Sothroners at the end of the War.

It is rewarding in that we enjoy a very authentic presentation from the cookstove to the table. The only interference is an occasional motorcar on the road!

FANTASTIC! I LOVE this post! Sure wish we could have been there~ What a wonderful time you all must have had!
Mary
http://anhistoricallady.blogspot.com

Thank you both. It is quite fun to do something like this. It's always my hope to inspire people to do some of these more simple events in such rough financial times.

I love it! And I love that everyone agrees to play by the rules for the few hours you gather for these events and meetings. I'm sure each person has something unique to bring to the table and to teach the others. And I do remember your earlier posts about Carrie, your servant girl. How nice of you to take her to dinner 150+ years later!

What GREAT FUN this was!!
It must have taken a bit to organize but to gratifying results!!
All the pictures are great, and I love your Parlor!!
Blessings, Linnie

Thank you Pam.
Yeah...it only took us 150 years to pay poor Carrie back for her hard work!
It was fun - - I just have to learn to put the camera down to keep the effect going. Next time - - - -
Thanks!