The Way-Back Machine Has Been Switched On

This week we have been readying ourselves for perhaps our biggest and, for many, the most favorite Civil War reenactment of the year: The Civil War Remembrance, taking place this weekend at Greenfield Village. It is a three day event, beginning Saturday morning and ending Monday evening, although for many of us, setting up Friday evening has a past/present mixed atmosphere all its own. 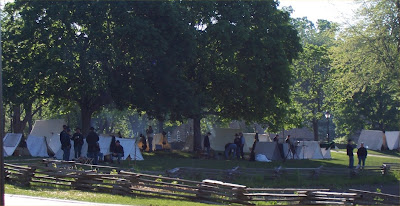 Union Camp at the Village of Greenfield
This event not only takes place in a historic village, but it's the first big reenactment of the season, the one where we can see our old friends, meet new ones, and show off our latest reenacting acquisitions. For instance, my wife recently finished making her new half-mourning dress and bonnet. Due to so many other activities and family situations, it took her a bit longer than expected, but she did it, and I couldn't be more proud. Why half mourning? Because full mourning has a very strict etiquette that is a bit too much for her to do and would not work well here, especially with our youngest children running around (too get the whole story of why she will be doing a mourning impression please read my blog from late last year Mourning ). Besides, one of the homes inside Greenfield Village (Adams Family Home ) will have a full-mourning presentation for the entire weekend.

My wife also made our 8 year old daughter new under-pinnings and our 13 year old son a new pair of period-appropriate pants as well - he's growing like a weed and needed a pair drastically.
For myself, she's hoping to complete my waistcoat this summer. And I ordered a new shirt and undershirt from the Corner Clothiers of Gettysburg (http://www.cornerclothiers.com/) the finest period-correct men's clothing store anywhere! (As of this writing, it seems that their site has been hi-jacked - hopefully it will be back up soon.) My stuff has been shipped and should arrive Friday. I hope it comes before we leave!

We made a list of food we're going to bring - it can become a bit difficult here due to the fact that my 13 year old is autistic and has a very limited selection of food he will eat without a fight. So, we're going to try to incorporate period-appropriate snacks that we know he likes (peanuts, fruits, etc.) with a few more contemporary items and then ween him down to the more correct-for-the-1860's snacks. I am hoping that he, upon seeing that we have cut way down on the modern items, will realize he hasn't much of a choice but to eat what we brought.
I believe the hardest part for me is trying to get my wife to get away from bringing too many 21st century items. We argue before nearly each major event because of this situation. I really would like us to try to bring strictly period correct items and work more toward the progressive stage in living history. It is so much more difficult, however, with our 13 year old - she feels our son cannot handle it very easily without the modern items. At least we're working together on it this year - we have made the attempt to work it out ahead of time - get the arguing out of the way a few days earlier so we can enjoy every part of the experience. We'll see how that works. I make small inroads every new season...that's a plus. 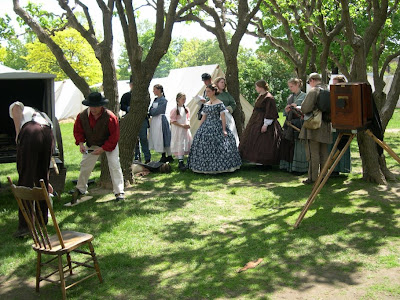 Folks waiting to have their images taken
So, the carriage will be packed first thing Friday, our horses will be fed til their full, and we will get our youngest children out of the schoolhouse an hour early for our journey to the Village of Greenfield.
Those of you in the Detroit area (and even those of you from a long distance), won't you come and visit us at Greenfield Village this Memorial Weekend? I can practically guarantee that it will most-definitely be worth your while. If you do decide to come, just ask for the Post Master - the reenactor Post Master - when you arrive. I'd love to meet you!
By the way, I will have pictures of this event next week.

An Interview With "President Lincoln"

Through my travels in the reenacting/living history community I have met some wonderful people, and Fred & Bonnie Priebe are probably two of the more fascinating that I have had the pleasure to befriend. The two portray President and Mrs. Lincoln and, I would venture to believe, probably at times spend more time as the Lincoln's than as the Priebe's!
This past February I wrote an article for the newsletter of the Civil War unit I belong to, the 21st Michigan Co. H, about Mr. Lincoln in celebration of his 200th birthday.
I'd like to present it here: