Though Blackthorn Pub has been in this building since 2011,  I am not sure how old the structure itself is.  It is a part of the attached buildings along Main Street so I imagine it is late 19th century.  No matter because the inside has the looks and feel of being much older,  with its brick-lined walls and wood flooring.
Here is our livestream - for the first few seconds the camera is sideways,  but it was corrected quickly - just copy and paste the link below into your task bar:
https://www.facebook.com/tgiorlando/videos/969902703937498
And the people you see while out and about in an authentic Victorian village such as Holly at Christmastime is wonderful,  especially when they know how to dress properly for the times:
So,  beginning last year  (2020),  my wife started a new tradition:  having our Grandkids come over the Saturday before Christmas to make and bake Christmas cookies.  Oh,  Patty does not do all the work while the kids play - - oh no...she puts  'em to work so they can take pride in what they've done.  And have fun while doing it!
But then,  we also had time to take a grandchildren/grandparent photo in front of our Christmas Tree.
Yes,  I lit the tree candles for this picture - of course I did!
Christmas is what you make it.  If  you want it to be about the gifts,  you'll find yourself in a mall or on line spending loads of money.  If you want to complain about the cold,  the music,  the Nativity,  celebrants like me,  people who put up decorations early or radio stations that you normally don't even listen to playing carols too early  (in your opinion),  or anything else Christmas,  then I suppose you'll be miserable.  Perhaps you don't like when people constantly post all things Christmas on their own Facebook page and it angers you to have to scroll past.
You'd hate my page  (lol)!
At the very top of this posting I wrote:  this is a time of joyfulness and a merry time of year.  Yes,  this ancient lyric from the mid-1600s is exactly the way I feel.  And,  like Ebenezer Scrooge's nephew said to the miserable miser:  "There are many things from which I might have derived good,  by which I have not profited,  I dare say,"  returned the nephew;  "Christmas among the rest.  But I am sure I have always thought of Christmas-time...as a good time;  a kind,  forgiving,  charitable,  pleasant time;  the only time I know of,  in the long calendar of the year,  when men and women seem by one consent to open their shut-up hearts freely,  and to think of people below them as if they really were fellow passengers to the grave,  and not another race of creatures bound on other journeys.  And therefore,  uncle,  though it has never put a scrap of gold or silver in my pocket,  I believe that it has done me good,  and will do me good;  and I say,  God bless it!"
And so,  as Tiny Tim said,  "A Merry Christmas to us all;  God bless us,  every one!"

As living historian civilians,  I really am not sure if we can call what we do at Christmas at the Fort  'reenacting.'  I believe it might be more accurate to say we are actually celebrating an 1860s Christmas rather than  'pretending'  to do so.
What would you call it when we are in a period-correct home and have created a family setting to spend the day and into the evening participating in such holiday pastimes as decorating a small table-top Christmas tree,  singing ancient carols,  visiting neighbors,  spending the daytime hours in natural daylight,  then spending the waning late afternoon light and early evening hours in candle light & oil lamp light,  and gathering together in the dining room as our domestic servant serves us a fine repast of ham,  green beans,  stuffing/dressing,  breads,  pies,  and other Christmas dinner delights for our Christmas Eve meal?
What about lighting our table top Christmas Tree as the Victorians once did?
In other words,  even knowing the fact that we are not a real family of the 1860s,  the way we respond and present ourselves to each other and to visitors very strongly gives off the intended impression to not only us but the touring groups as well.
We were there...Christmas 1863.
And so were the visitors.
In fact,  the only hint of 21st century life is when the tour groups come through,  and even then most of us are unaware of these ghosts of Christmas future,  for only one from our group will step out to speak with them as to not disrupt our holiday celebration.
And,  after about eight or so hours,  the day is done,  and we retire for the night  (in other words,  we all go to our own respective homes).
I would harbor to bet that our time in the past celebrating Christmas is pretty close to the way the people we represent who actually lived  "back then"  also celebrated.
So,  no - - I do not believe this is reenacting...for we are actually  celebrating,  just as we have together for over a decade.  And the one year we could not,  due to the pandemic,  more than one from our group stated that it would not be Christmas for them without participating at Christmas at the Fort.
Now that's special.

Then the highlight of the evening...of the entire day...came about when we lit the candles on the Christmas Tree:
Our small group of living historians has a private message page where we work together to make our time-travel excursions the best we can.  It's here where we pull it all together to make it work  (yes,  we have one for our cabin excursions, too).
So,  within a day or two after the Christmas at the Fort event took place on Saturday December 4,  we all wrote quick  "reports" - a line or two each - to summarize our opinions of  how we felt it went.
Here's what each of us wrote:
Carrie - (L)ast night was a great time.  The tree was the highlight of the evening for me.  Magic.
Charlotte - ‘‘Twas a lovely day”  spending time with my  “history family”  at historic Fort Wayne Detroit for their Christmas tour.  We were privileged to occupy the commandants quarter’s as a Civil War era family.  We laughed,  dined,  decorated and sang Silent Night around a Candle lit tree.  Thank you Ken,  Jackie,  Carrie and Larissa.
Jackie - I don’t think we can top last night,  but knowing all of you we probably will.  What a special moment.
Ken  (hey! that's me!) - I spoke with Tom B.  tonight - - he was absolutely thrilled with what we did,  as he usually is,  but the candle-lit tree just put it over the top.  He said,  just as we all have,  that it was magical.
Yes...it truly was - - I've never lit candles on a tree while in my period clothing before...while surrounded by others wearing clothing of the same era.  And definitely not in an authentic period home - a home that Tom says did exactly as we did a hundred and forty years ago.
Just wow-----
Larissa - We had a very special moment lighting the candles on our Christmas tree with a group of visitors at Fort Wayne last night.  It was magical.
And  'neath my posted picture I received a few very nice comments as well:
Kimberly - Beautiful! This makes me think of my Great Great Grandparents and I wouldn't be surprised if they had Christmas trees just like your beautiful Christmas tree.
Vicki - Absolutely gorgeous!
Joyce - What a great picture!!  Merry 1800's Christmas.
Susan - Oh my goodness.
Linda - Beautiful!  That’s a Christmas card right there!
Sharon M. - It’s simply beautiful Ken.  Thank you for sharing. 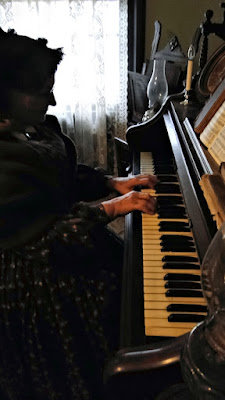 On a sad note,  we lost a very important member of our 1860s Logan   "family"   - Larissa's mother,  Violet,  who joined us nearly every Christmas here at the Fort,  passed away in August,  so it was much tougher for Larissa - and all of us - to take part.  Violet portrayed my mother-in-law,  and I was proud to call her that,  even if for only a short few hours each time.  And when  those who portrayed mine and Larissa's children could join us,  they happily called Violet  "grandmother,"  and she took them on as her grandchildren.  Most of all,  however,  Violet added to the Christmas cheer and celebration by playing and singing Christmas carols at the pump organ there in the parlor.
Larissa pulled through,  and she even noted to us that:
"(This was)  something very special that I won’t forget.  Thanks to you all for making a hard but wonderful day perfect."
We were very happy to do so,  my good friend.
Very happy to do so.
So I dedicate today's blog post to Violet Kyryluk - a wonderful lady to all who knew her,  wife to Nick,  mother to Larissa and Marcus,  and grandmother to Zane & Titus...and actual mother-in-law to Mike  (Larissa's husband).  You were all blessed...and we who knew her were blessed as well.
Here is a link to see a sort of  "Best of"  posting about my spending Christmas time in the past - click HERE
~  ~  ~  ~  ~