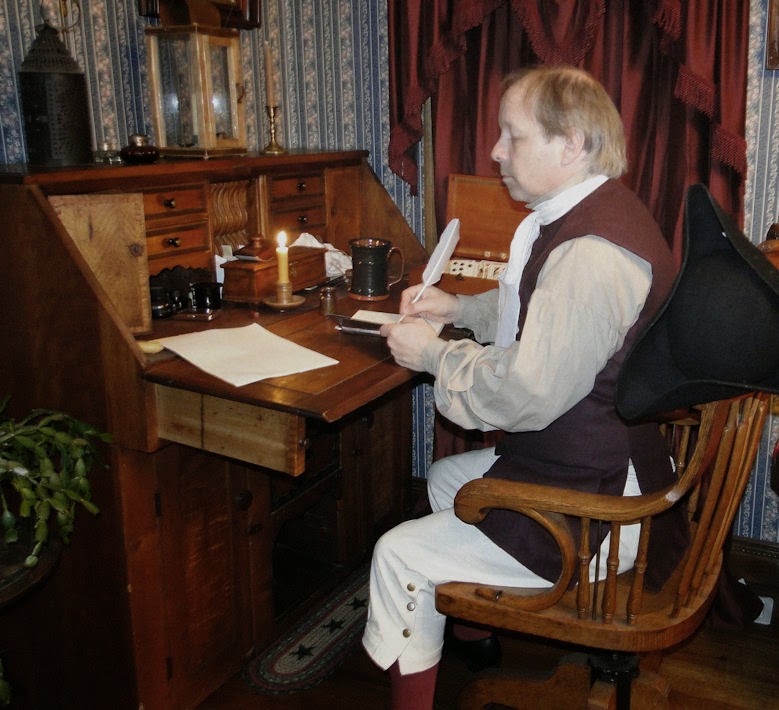 Well...I did it! I went out and purchased colonial clothing for myself.
As I've written in a posting earlier this year, I have been wanting to do colonial reenacting for many years. In all actuality, the colonial era was my first history love, dating way back to when I was a small lad during the pre-bicentennial era of the late 1960's/early 1970's and, well, it never really left me. During the 1980's and 90's my wife & I, along with our kids, would visit the various local colonial reenactments at Greenfield Village, Crossroads Village, Stoney Creek, and one called "Feast of the Ste. Claire" held in a Port Huron park, and we always enjoyed ourselves immensely. In fact, it was in Port Huron that I first wondered if we could do something so historically cool as reenacting.
And then suddenly, without much warning, they were gone. My beloved colonial events were quickly disappearing. Except for Port Huron.
(There is another wonderful group known as the Ste. Claire Voyageurs. The Voyageurs were Great Lakes fur traders, missionaries, and explorers that came to eastern Michigan in the early 1600's. This group of reenactors do such a fine job at showing this part of history, and I visit their encampments frequently, but, unfortunately, their events usually seem to coincide with my Civil War events, and that makes it very tough to attend.)
When I inquired about the reasons these colonial celebrations were being discontinued the answer was always the same: "They didn't draw enough spectators."
That may be partly true, but I'm not sure if it's completely true. I believe that there was another reason for the event dismissals: at Greenfield Village, the then President of the Board of Directors, Steve Hamp, commented that he was not very much into early American history and preferred the early 20th century time period instead and planned to steer the Village in that direction.
Crossroads Village cancelled their colonial event due mainly to their person-in-charge (I don't remember her name now) being an anti-gun/anti-war advocate (even in history) and wanted to turn that village into a "family-friendly" theme-type park, whatever that means. Shortly after doing away with Colonial Days, she successfully got rid of their Civil War reenactment as well.
(Lucky for us, Greenfield Village still has their Civil War Remembrance reenactment).
So now we have very little representing the colonial period in this area, especially depicting townsfolk. Except for "Feast of the Ste. Claire" and the Voyageurs (both of which are still popular), it seemed that the golden age of the colonial reenactments was over in Michigan by the end of the 20th century.


Greenfield Village had quite a festival of its own, and we visited every year:


A wonderful - albeit small - reprieve, however, is taking place. Historic Fort Wayne in downtown Detroit is bringing back the colonial period in an ever-growing event that I hope takes off big time. I pray this is a sign of historical things to come!


This is not to say I didn't (or don't) have a love for the Civil War and pioneer eras as well, for I have a passion for the early-to-mid 19th century, too. And the reenactments of Civil War were very plentiful - they still are!- and I absolutely love doing living history of the mid-19th century.
But I've always longed to do the far too under-represented colonial period of our nation's history.
So finally this year of 2014, with the money I made performing with Simply Dickens and doing historical presentations, I was able to save up enough to purchase a pretty good foundation of clothing, circa 1770.
Let me explain how I got there - - -
There is a living history expo that takes place every March in Kalamazoo (Michigan). Three gigantic halls filled with nearly anything a living historian or a reenactor could want, from the French & Indian War through the Civil War.


I remember the first year we went, over a decade ago, and I was a relative newcomer to Civil War reenacting. The sheer size and immense popularity of this expo was simply overwhelming.
But the Civil War vendors there were top notch and we were able to get most of what we needed.
Even though there isn't much we need to get for Civil War anymore, we still attend mainly because so many of our reenactor friends go.
Knowing that the Revolutionary War period was well represented here, when the time came for me to look for clothing of that sort, I knew just where to go.
Well, kinda. I wanted to do it right, but within my means. 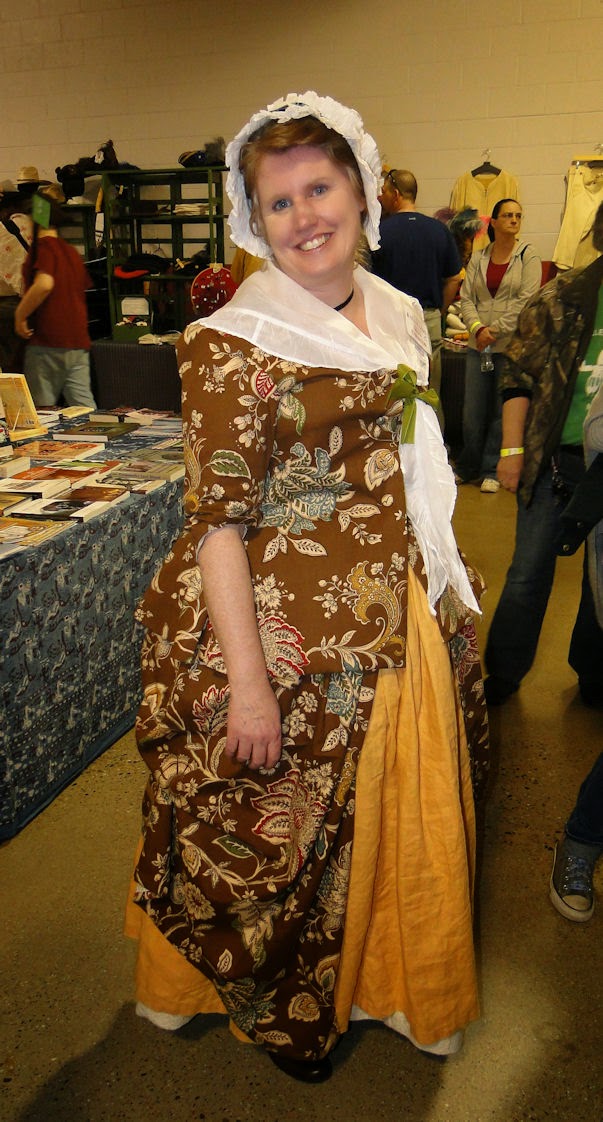 My friend Sandy (pictured left) is a long-time living historian who was, shall we say, born into living history, first as a colonial then as a woman of the Civil War.
When I explained to her what I was looking for, she pointed me in the right direction, to a vendor called Kenockee Tradin' Post (or click HERE for their more exciting and more informative Facebook page) who pretty much had nearly everything I needed.
And what they didn't have I found at another vendor nearby. At a fair price.
Except shoes - I didn't find colonial shoes in my size, so I ordered a pair from Jas. Towsend & Son the following Monday and, wonder of all wonders, received them the very next day!
Yeah, man! I was a happy camper!
I've really been wanting the opportunity to wear my new/old duds, but the first real colonial period reenactment that I will be able to attend isn't until the first weekend in June - at Historic Fort Wayne (mentioned above) - and I don't want to wait that long.
So, you know me. I march to the (off) beat of my own fife and drum, and I went to the only place in the area around here where I could wear my colonial clothing and "fit in" - Greenfield Village.
One of the unique things about Greenfield Village is that, aside from Mackinac Island, they are it for historical structures dating back to the 18th century in Michigan. And being that it is only a half hour drive from my home, well, need I say more?
What's really cool is that not only does Greenfield Village have the colonial houses but it also has an exact replica of Independence Hall as the front facade for the Henry Ford Museum! So I don't have to drive 12 hours to Philadelphia to get a photo in front of the place where the Declaration of Independence was signed.
So guess what I did with a couple of willing participants very recently - - - -?
Well, here, tell you what: we'll let the following pictures tell the story....


So, there you have it. My debut as a colonial...a patriot...a Son of Liberty. It was a very interesting and enjoyable experience. One of my favorite parts of this day happened shortly before leaving the Village when a little boy, probably around the age of 9 or ten, asked me why I was dressed in this manner. Since the date just happened to be April 18, I explained to him the significance of this date, and how "239 years ago tonight, Paul Revere would make his famous ride, warning the countryside that the regulars were out, and they were coming this way!"
This young man was thrilled to hear this and immediately ran to his mother, shouting, "Mom! Do you know what happened 239 years ago tonight?!?"
Only a few minutes later I saw this same young man pretending his mother's umbrella was a musket and 'shooting' the British, shouting "The British are coming!"
I corrected him to yell "the regulars are coming," which he did, and then explained that "tomorrow, April 19, would be the 239 anniversary of the beginning of the war for our nation's Independence - the American Revolution."
He loved it.
How exciting for him to hear of our nation's history in this manner.
How exciting for me to teach him something that one hardly even hears about anymore.
Yes, this capped an awesome day for me.

Many thanks to my friends, Lynn and Carolyn, for joining me in my colonial debut. It would not have been the same for me to go alone.
Big time thanks to Greenfield Village for allowing visitors to dress in period clothing and allow us a more immersion-type experience.
And, of course, thank you to my son, Rob, for being our photographer for the day. You did a fine job, Rob!

And then I did this, which was a bit easier since it was only the back ground that I changed, which was solid, unlike the picture above of which has three different photos making the background scenario. Independence Hall is the exact replica Henry Ford had constructed as the facade for his museum: 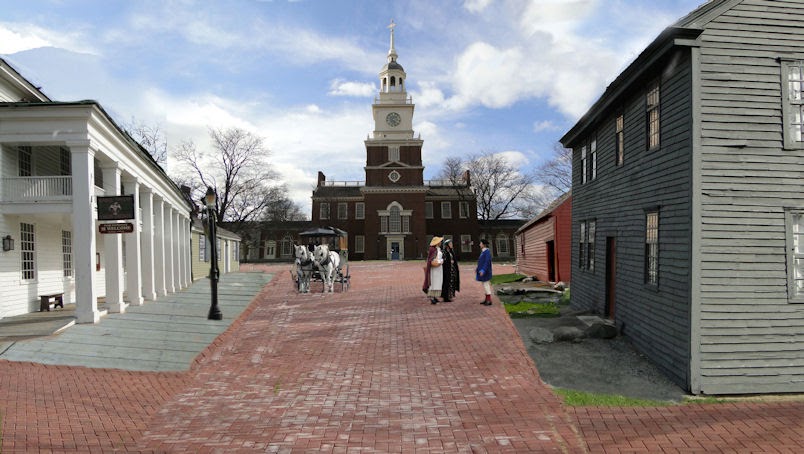 Interested in colonial life and of the early history of our great nation? Click any of the following links:

In the Good Old Colony Days
Faces of History: Original Photographs of Revolutionary War Vets
With Liberty and Justice For All: The Fight for Independence at the Henry Ford Museum
Reenacting Early American History
Detroit: A True Colonial City
Listen Children and You Shall Hear...

A Future Time Travel Excursion to the Colonies