A Day in the Life: Living History on a Spring Day in 1772 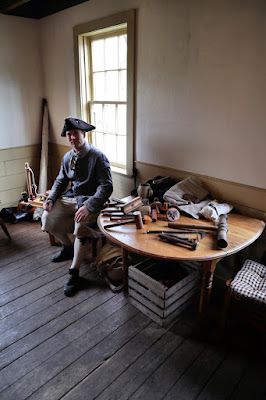 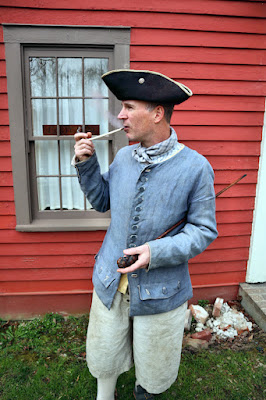 Before we close out today's post,  I have a question:  why do so many people automatically believe memes without question?  Is it because they may be written with such an authoritative hand that they  *must*  be true?
Is it because they use a picture to accent the text therein,  so,  again,  it must be true?
Memes are great for fun...for jokes.
But if you see one that claims to state something as fact,  there is a very good and probable chance it is not true...so I would recommend looking it up - do some research - from more than one source (and preferably from  *reliable*  sources without agendas).
Now,  that being said,  is this meme true or not?
Below the meme here I wrote whether it is fact or fiction: 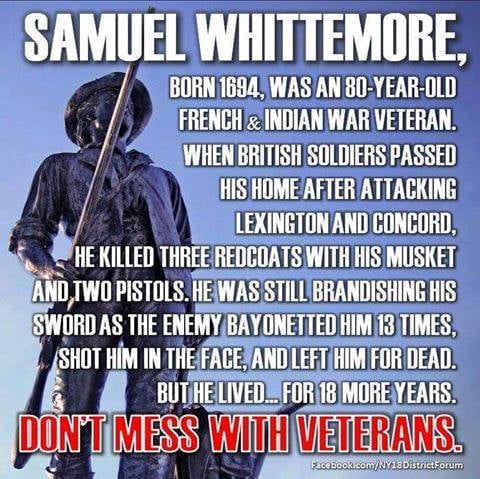 Hundreds of militia men from nearby towns came to harass the British as they retreated to Boston.
Samuel Whittemore left his field in Menotomy,  gathered his old weapons and positioned himself behind his stonewall.
When the regiment passed by,  Samuel Whittemore stood and shot point-blank at a British regular with his musket.  Then he took out his dueling pistols and shot two more soldiers to death.
The old farmer then grabbed his ornamental sword to fend off the British soldiers who swarmed over him.  It didn’t go so well.  The British shot him in the cheek,  bayoneted him and beat him with the butts of their rifles.
Samuel Whittemore then fades from the historical record until his death on Feb. 2,  1793,  at the age of 96.  He was laid to rest in the Old Burying Ground in Arlington.
So,  in researching this unknown person after reading the meme,  I found out that…yes,  it absolutely IS true!  I located the information from reliable sites such as the New England Historical Society and The Journal For the American Revolution.
Not long before he died,  Whittemore was asked whether he regretted his actions on that day in April,  and he must have been disgusted to be asked when he replied,  “No!  I would take the same chance all over again.”
Whittemore lived long enough to see his hopes and dreams reach fruition.  He lived to see the the US declare independence,  the ratification of the U.S.  Constitution,  and saw George Washington become our nation’s first president.  And, best of all,  he lived with the sure knowledge he’d always fought courageously and tirelessly for what he believed in.  And that,  my friend,  is the mark of a real American hero:  honor.
By the way,  the Massachusetts Legislature declared him the official state hero in 2005.
So---before posting  “factual”  memes,  all I ask is please do some actual research.
Remember:  please don't blindly believe the folly spewed on Facebook and elsewhere without researching for yourself.  Yeah,  even those who you believe to be historians often have mistaken information or may have an agenda - unfortunately,  media-based in too many cases.
There's a lot to putting on a historical event.  From finding a location willing to host it,  to finding the right people to help you put it all together,  to getting excited participants willing to take part,  to planning out the scenarios,  to finding volunteers willing to...um...volunteer  wherever they're needed,  to praying for decent weather to putting up with naysayers and complainers,  to...well,  you get the idea.  But in the end we find it has all been worth it when a job well done by all has been accomplished,  and you come home with a smile on your face,  gazing at so many wonderful photographic remembrances that hit your Facebook page afterward.
So worth while.
The shame would be for such a major event as the sestercentennial anniversary of the birth of our country to be forgotten about with little mention.  To be honest,  I haven't heard much talk at all about it,  which causes me concern that there will be little fanfare.  I mean,  look at the meager remembrances for the 200th anniversary of the War of 1812  (the War that gave us the  "Star-Spangled Banner"!).  Greenfield Village gave a commemoration for two years with hardly any advertising at all.  The media all but ignored it.
So what will happen for the 250th Revolutionary War anniversary?
Well,  it is my fervent hope that there will be the same vim and vigor that occurred for the 150th Civil War,  with tons of historical reenactments,  real and true programming,  and a national celebration of which will not be seen for another 50 years.  Maybe even border the frolicking festivities that occurred nearly 50 years earlier in that bicentennial year of 1976!
And hopefully it will be a celebration and not a condemnation as what seems to be so popular in our culture today.
Only time will tell.
Until next time,  see you in time.
Besides using my own pictures,  a big thank you to many others for contributing pictures:
Lynn Anderson,  Barb Baldinger,  Charlotte Bauer,  Leanie Bayly,  Susan Hansen,  Bob Jacobs,  Lenore Jordan,  Rick Mikulak,  and my wife Patty.
Some of the historical information came from the books  "Taverns of the American Revolution"  by Adrian Covert and  "Soldier of the American Revolution"  by Denis Hambucken & Bill Payson.
Also,  the patriotism of spinning women comes from  "The Age of Homespun"  by Laurel Thatcher Ulrich.
Visit the real Buckman Tavern through photographs and a virtual tour HERE