Colonial Kensington 2018: Would I Travel Back In Time If I Could...

Reenacting is my solace.
With a modern world gone mad, it is my place of contentment...my escape.
Some people like to take a long walk. Others might exercise. Some head to the beach. And many will drink.
But for me, it's spending time in the past.
In another world gone mad.
Go figure...
But it's a passion for us who participate in this hobby, isn't it, to do our ultimate best to recreate what has gone on before? And it is more of a challenge in our attempts to do it accurately.
We have, shall we say, a real passion for the past.
And I must say that my living history experiences seem to improve with each passing event. Of course they are improving---as I delve deeper into my historical research and gain a better understanding of those who came before, my involvement in this hobby continuously grows and glows.
It also helps that I've made some fine friends in the Rev War circle, and a few of my long-time Civil War reenacting pals are jumping across the 90 year gap to join me in the good ol' colony days, for their interest in US history goes beyond the four years that the north and south were fighting.
With that being said, this year's Colonial Kensington was the best one yet for me out of the five years I have attended. For the first time I set up my tent here, and that just seemed to allow for much more involvement, realism, and even, to a degree, a larger participant connection for me, for there is always a decent public attendance at this event, and they tend to show a concerted interest in our nation's colonial past. By having my own tent, I had a home, and all were welcome to visit.
You see, previously at Kensington I've set up a few things on a table 'neath the pavilion and basically just sat around speaking with whomever would come my way. But I set up camp, and I am glad I did. In fact, our little area was where the Americans - the Patriots - set up, and there were a few of us there in this meadow kind of setting. I was able to share my space with Dr. Benjamin Franklin, and my next door neighbors were the Diggs family. Across the way was a family I just met and I am ashamed to say I do not remember their names, but they, like the others who side with the Continentals, were very kind.(Yes, yes, the Loyalists are also very kind - - just giving a little ribbing here!).

Colonial Kensington always brings out a goodly amount of reenactors, and I believe the public was pleased to see all of the activity going on as well. In fact, a couple of the apparitions from the future mentioned to me that the 250th anniversary of the Revolutionary War was coming up on the horizon, and that was one of the reasons for coming out to this event.
Others mentioned the Hamilton play and the AMC TV series Turn: Washington's Spies.
Hmmm...methinks this era of reenacting is going to see an upswing over the next few years.
I hope so.
Anyhow, welcome to my camp:

And right next to my set up was the Diggs Family camp.
They are the young family on the right:


With the war at hand, farmers continued to grow food, artisans continued to practice their trades, and merchants attempted to maintain their businesses. Despite efforts to maintain business as usual, the entire social landscape was changed.
One of the nice things about Colonial Kensington is that it is loosely set up somewhat as a village, with homes (tents) and even a shopping/business district.


Then we have the Carrot Patch Farm:

Anxiety and concern were at a high; besides the stepping up on the marching and drilling of the King's armies, there were reports from local patriots indicating the presence of a foraging party of British soldiers and their Loyalist allies hiding in the woods.

"...some just in the position they were in when shot down, others with a small spot of skin taken off their hind quarters and a mess of steak taken out; household furniture hacked and broken to pieces; wells filled up and mechanic's and farmer's tools destroyed. It was in the height of the season of cherries, the innocent industrious creatures could not climb the trees for the fruit, but universally cut them down. Such conduct did not give the Americans any more agreeable feelings toward them than they entertained before."

For the battle, as our story goes, a few of us were out near the water, collecting scraps of wood for kindling, picking berries for pies, and just enjoying our day. We didn't notice all the King's men filing up over the hill beyond our scope.
Perhaps it takes a German-born professor of British history, currently at the University of Pittsburgh, to treat this highly charged subject so evenhandedly. His first chapter, “Tory Hunting,” begins with a grisly description of the tarring and feathering of an unpopular customs official in 1774. This was one of the myriad ways Colonial vigilantes “debased and defiled, humiliated and dehumanized, their Loyalist neighbors,” Hoock comments. Persecution became official after the Declaration of Independence, when Congress and the states passed confiscation and banishment acts.

Britain responded with “desolation warfare.” British warships bombarded coastal towns; Falmouth, for one, was reduced to a smoking ruin. The redcoats looted indiscriminately, seizing crops and property of rebels and Loyalists alike; plunder was often accompanied by rape. Some British commanders instructed their men to take no prisoners; wounded and defeated American soldiers were killed on the field. When they were made prisoners, American soldiers suffered in conditions so terrible that mortality rates ran as high as 70 percent.

Wars are not merely fought on the battlefield. Even in the 18th century, successful campaigns were the hallmark of a concerted effort. By 1783, the entire American population seemed battle weary, from the foot soldier to the farmer's wife. Their sacrifices helped secure freedoms for the generations that would follow.

Since there was no one battle in particular reenacted at Kensington, I have included historical facts on some of the actual battles fought during the Revolutionary War, as I have done in previous postings.

This was another excellent event, one that I am sure was pleasing to all involved, from participant to visitor. Participation was high and so was the amount of 21st century guests who came to see us, many of whom were part of the younger set, and they asked so many wonderful questions. And, while in my farm clothes, I was asked about farming in the Detroit area during the 18th century, which I've not been asked before.
It's good to see knowledge and curiosity of American history from so many.
That gives me hope for our future past.
Yep...Colonial Kensington was a mighty fine event indeed!

But wait---there's more:
So...a photographer friend, Jerry Jordan, took a photo of me.
That one is on the left.
He then sort of roughed me up a bit in the picture on the right, giving me almost a pirate look...or maybe one who enjoys the tavern a bit too much!
Anyhow, they are pretty cool shots, so I thought I would present both of them here - - - 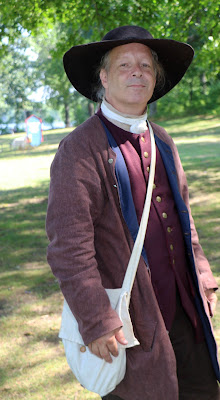 More often than I care to, I read of reenactors dropping out of the hobby due to other living historian hobbyists "ruining" it for them by insisting on everything being historically accurate. To me, that's silly. One would think the opposite: that a reenactor would want to leave because others may not be up to a higher standard of presenting history. I mean, I am one of those who believes if you are going to do something, then do it to the best of your ability. That's what my father taught me. That's the way I try to be. The information is out there, easily accessible. We all have different levels of accuracy and authenticity, but it's the striving to improve that makes the difference.
One of the things I feel is a must is to change it up a bit. For instance, the picture you see to the left here is of me working toward my 1770s farming impression. Yes, I am still researching on it, but I believe I am heading in the right direction. But it is a nice change from strictly presenting as Paul Revere. Now, please understand, I greatly enjoy interpreting both personas, and that's why I do more than one, as to not become bored or stagnant. Thus, I am committed to continuous historical research, something I enjoy immensely.
By the way, for folks who are interested, there are a number of pretty good Facebook pages where everyone from the newbie to the more senior reenactor can get information on nearly anything in the hobby as well as to share their knowledge or findings with others of the same interest and mindset:
18th Century Stop and Swap
Samson's Historical
Jas Townsend and Son
18th Century Closet
Ladies & Gentlemen of the American Colonies
18th Century Civilian Reenactors
Citizens of the American Colonies

And finally:
So, the day before Colonial Kensington I was up in Port Onieda, Michigan, west of Traverse City, doing four 1860s farming presentations with my friend and presenter partner Larissa. As it is quite a long drive, I didn't get back home until nearly 10:30 that night (after leaving at 5:00 am to get there), showered, played on the computer, then went to bed. I was up before 7:00 the next morning, on the road by 8 and arrived by 9 to set up my tent, put on my colonial clothes, and was ready for the visiting public by 10 am.
Whew!
But what a time I had!
And my son gets the nap!

Some of the information came from THIS, THIS and THIS site.
Other quotes came from Joseph Plumb Martin's A Narrative of a Revolutionary Soldier
and
The Spirit of Seventy-Six by Henry Steele Commager & Richard B. Morris

Many of the photos in this posting are from me, but there are a few by other photographers, notably Kerry Dennis, Lenore & Jerry Jordan, Richard Reaume, and Cheryl Crawford.
I thank you all for the use of your wonderful pictures.

If you are interested in reading other posts I've written about colonial times and reenacting, just click the linked titles below:
Good Old Colony Days

Cooking on the Hearth

The Wives of Paul Revere