The 21st Michigan Spring Meeting 2014 - Bringing the Past to Life

As the civilian coordinator for the 21st Michigan, I normally have only one period dress civilian meeting during the pre-reenacting season when the cold winter weather seemingly prevents much from happening in the world of living history. Many of the members of our group use the January through April months to hone our historical skills, make or purchase new clothing, and take that opportunity to dress in our period clothing while at our period dress meeting.
However, coming off of the Christmas at the Fort 'high,' I decided to have two meetings this year. My immersion experiences at the annual Christmas at the Fort became the catalyst to raise the bar of our presentations even higher, for it's an amazing experience like nothing I've done before. It can feel almost like a literal time-travel encounter.
And I would love for other living historians to have that same feeling.
Hence the reason why I called for two civilian meetings this year: the first one, our winter meeting that we had back in February, was used to speak on how we've been putting our immersion events together and how to make the past a reality for those involved, and this second meeting to put it all into practice by giving members a few scenarios to "act out."
Not acting as an actor would, but acting as real life...without any scripts.
For instance, I chose two of our members to portray husband & wife and gave them the topic The Husband Is Telling His Wife That He Plans To Join In The Fight To Preserve The Union, then let them play it out. The two practically had everyone in tears in the way they spoke to each other in such a heartfelt and dramatic way.
Other topics for scenarios included Looking For a Room at a Tavern, A Wounded Soldier Returns Home from the War, A Laundress Looking For Work, Two Sisters Speak of Times Gone By, An Irish Washerwoman Explaining Why the Laundry Was Not Completed, and a few others.
We also showed proper ways for a man and a woman to greet each other in public and the response expected depending on whether they knew each other or not.
Then, after each scenario, we discussed the interaction that took place and the whys & wherefores of the etiquette of the time.
I wasn't sure how a meeting like this would all pan out, for I've never done one like this before. I must say it went very well with each member there participating *almost* willingly!
On top of the meeting, our hostess, who happens to live in a house that was built in 1880, had an 1860's tea that also included finger foods, small sandwiches, desserts, scones, etc.
And we played a parlor game...in an actual parlor!
Meetings of this sort are important, for we need to spend more time on our impressions and impressing upon our membership that learning about the past and learning how to present the past matters as much as anything else in the world of reenacting. I cannot express this enough!
So anyhow, here you go - - - here are photos of the springtime period dress civilian meeting of the 21st Michigan:


Well, every unit has their "class clown" right? We in the 21st Michigan have two! Yep, Larissa and Rebecca throw out the one liners and willingly make up poses that would make a stitch counter grimace.
I suppose that's what I like about these two: they're serious when they're supposed to be, and hilarious behind the scenes! 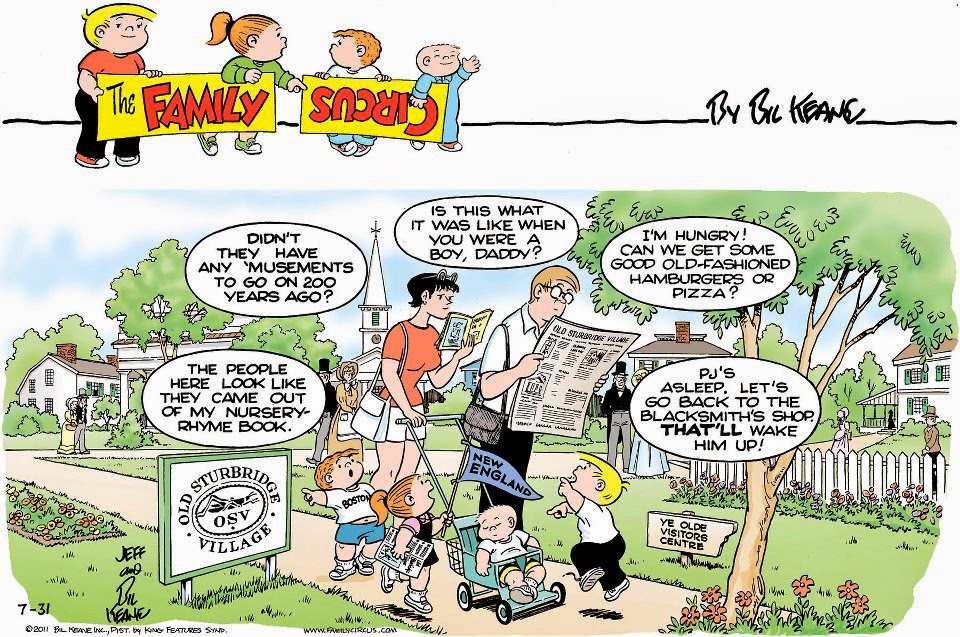 I've never been to Old Sturbridge Village (OSV), the outdoor open-air museum located in Sturbridge, Massachusetts, but I've seen many, many photographs from various friends who have visited the place. One friend in particular, Vicki Stevens, lives not too far from OSV and visits frequently; she regularly posts her photos on Facebook. For me, however, I have no plans to go there in the near future, though I very much would like to. At this time I feel the need to head to Colonial Williamsburg first, for due to my wife finding out that she is a direct descendant of a Rev War soldier and is now a member of the D.A.R., Colonial Williamsburg is at the top of my 'places I must see' list.
But you can bet that Old Sturbridge Village is not too far behind.
Old Sturbridge Village, as is written in a book by Kent McCallum, presents a vivid and unforgettable portrait of life in a country village in early-19th century New England. This outdoor museum has set new standards for the historical study of material life. With more than forty buildings----ranging from private homes to a working sawmill and gristmill----and an ambitious program of using interpreters in period clothing to interact with and educate visitors, Old Sturbridge Village, since 1946, has made the past come alive for millions of people. It's these presentations that document the work and daily life of a past that might otherwise be forgotten.
Vicki Stevens has graciously allowed me, for this week's post, to use a few of the photographs she has taken during her visits to OSV and I would like to thank her for the use of them. It's through her pictures that those of us who have never been can visit the Village vicariously, much in the same way Vicki has told me she visits Greenfield Village - through my own pictures.
So, off we go, traveling through time...to 1840 New England.
Enjoy!

Next we have the Parsonage.


Now we visit the Freeman farm.


From the book, Old Sturbridge Village by Kent McCallum, we read an interesting bit of social history about the Freeman family:
Pliny's farm and family evidently went through difficult years that coincided with the declining health of his wife Delia, who fell seriously ill in 1836. Previously, he had kept a horse, a team of oxen, four cows, several young cattle, one pig, and about twenty five sheep. But in that year he had sold off most of his sheep and all but one of the cows: there was no one at home who could tend the dairy. Pliny took work as a housewright until "hay time," and his teenage daughter went to live with one of her married sisters.His seventeen year old son stayed on to work the farm.
Deprived of the labor of women, households in early New England literally fell apart. Only the year before, Pliny and Delia had been caring for an infant grandson, whose mother, their eldest daughter, had been killed freakishly by a bolt of lightning. Pliny wrote to another son living in Ohio that the grieving son-in-law had "stopped housekeeping and will hire his board."

In 1839, Delia died of consumption. Following hard upon Pliny's sorrowwas the pressing need to locate someone - whether it be a daugher, a wife, or hired help - who could keep his house, and he wrote to his family sharing his grief and revealing his worry over "how to calculate about a housekeeper."
Son Dwight and daughter Augusta dutifully returned from an extended journey to Ohio to help their grieving father on the farm and to keep his house.
Work continued on modest improvements around the farmstead, and some of it must have been finished late in 1839. The following February, the widow Mary Peas wrote to congratulate Piny: "I was glad to hear you have got your house painted and a dorryard."
Both of these efforts were major steps in the history of rural improvement, and Pliny must have been greatly pleased when, later that year, Mary wrote again to accept his proposal to marry.

From the Freeman farm to the picturesque covered bridge.


Here's a wonderful scene out of the past - a carriage in front of the tavern!

Tavern barrooms were busy places in early New England. There, local men and travelers socialized over liquor and tobacco, discussing politics, farming, and current events. Some customers read newspapers or perused advertisements, while others sang popular songs or played cards and other games. Except for the tavern keeper’s wife or daughters, barrooms were the domain of men; female travelers were entertained in separate rooms.
(Information from the Old Sturbridge Village web site. If you would like more detailed information on 19th century taverns that I wrote a couple years ago, please click HERE)


Here we have a house with an interesting "history:"


For many at Old Sturbridge Village, the first whiff of spring isn't the aroma of spring flowers - it's the smell of wood smoke and maple syrup, a sure sign that the sap is rising and spring is on the way.  For four weekends throughout March OSV has a Maple Days event where visitors can witness a 19th-century rural New England working sugar camp.
They can see the entire sugar-making process, from tapping the trees to "sugaring off," and examine different tapping techniques. The period dressed historians will also cook foods of the early 19th century made with maple products by the hearth at the Village’s Freeman Farm.

And off we go for a couple of miscellaneous pictures I found historically interesting:

Of course, not every building in Old Sturbridge Village is featured in this post. As stated at the top, there are over 40 historic structures situated inside, many with period-dress presenters and artisans speaking and teaching about New England life in the early part of the 19th century.
It would take at least one more posting to do it some kind of justice.
But OSV really does sound like a wonderful place to visit...
I have a five year "history" plan, and visiting OSV is part of that plan. In the meantime, vicariously ain't so bad...
And when I do go there, you can bet I will revisit this posting and give a full-fledged update.
Once again, I would like to thank Ms. Vicki Stevens for her willingness to share a few of her many pictures she has taken.
I hope you enjoyed them as well.
Until next time-----! 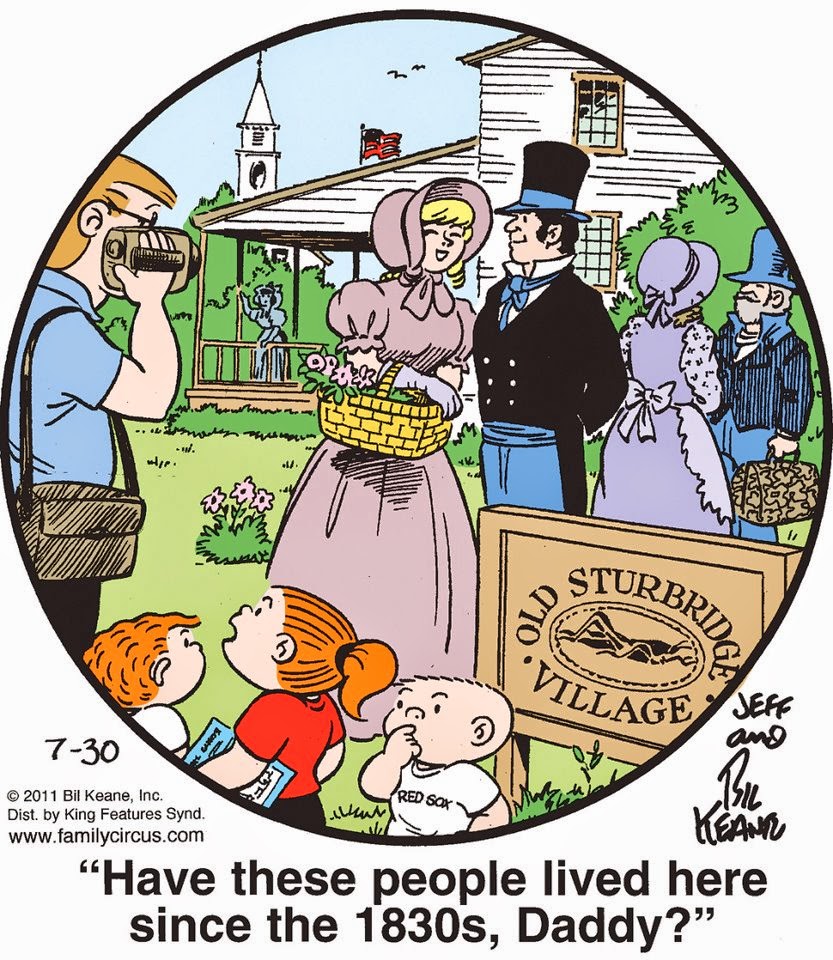 By the way, if you're interested in learning about the daily lives of our Victorian American ancestors, please check out a few of my other postings on the subject: