Time and Again - A Reenactor's Story?

I received the book "Time and Again" by Jack Finney from a friend for Christmas this year. I have heard much about this book but had never read it. I guess there was a reason - I am writing my own time-travel story and I didn't want any influence from anywhere or anyone else. But, I suppose all time-travel stories have a connecting link in a way. A good thing is that my story is definitely different from this one, not just the time period but in style and in the plot.
That's a good thing.
However, Mr. Finney truly thought of a unique realm to the time-travel experience. It's here that I am going to infringe on the copyright laws, and present a very interesting concept to the possibility of time-travel from Mr. Finney's book in which I believe many true-spirited reenactors and living historians can possibly relate and learn:

' Presently (Einstein) said that our ideas about time are largely mistaken. And I don't doubt for an instant that he was right once more. Because one of his final contributions not too long before he died was to prove that all of his theories are unified. They're not separate but inter-connected.
He meant that we're mistaken in our conception of what the past, present, and future really are. We think the past is gone, the future hasn't happened, and that only the present exists. Because the present is all we can see. It's only natural. (Einstein) said we're like people in a boat without oars drifting along a winding river. Around us we see only the present. We can't see the past, back in the bends and curves behind us. But, it's there.
You know the year, the day, and the month for literally millions of reasons: because the blanket you woke up under this morning may have been at least partly synthetic; because there is probably a box in your apartment with a switch; turn that switch, and the faces of living human beings will appear on a glass screen in the face of that box and speak nonsense to you. Because red and green lights signaled when you might cross a street on your way here this morning; because teenage children you saw were dressed as they were, because the front page of the Times looked precisely as it did this morning and as it never will again or ever has before.

The main character of the story was then taken to an older part of the city (in this case, New York) and the prospect of time-travel began once again:

You can see yesterday; most of it is left. There's even a good deal (of the 2oth century). There are fragments of still earlier days. Single buildings. Sometimes several together. Those places are fragments still remaining, of days which once lay out there as real as the day lying out there now, still surviving fragments of a clear April morning of 1871, a gray winter afternoon of 1840, a rainy dawn of 1793.

The main character then went to the Dakota Apartment Building, built in the early 1880's, which stands in front of Central Park. The dialogue continues:

The Dakota is unique. Suppose you were to stand at a window of one of the upper apratments and looked down into the park; say at dawn when very often no cars are to be seen. All around you is a building unchanged from the day it was built, including the room you stand in and very possibly even the glass pain you look through.
Picture one of those apratments standing empty for two months in the summer of 1894, as it did. Picture our arranging to sublet that very apartment for those identical months for the coming summer. If Albert Einstein is right - as he is - then hard as it may be to comprehend, the summer of 1894 still exists. That silent empty apartment exists back in that summer precisely as it exists in the summer that is coming. Unaltered and unchanged, identical in each, and existing in each. I believe it may be possible, you understand, for a man to walk out of that unchanged apartment and into that other summer.
(But), the uncountable millions of invisible threads that exist in here would bind him to this (coming) summer, no matter how unaltered the apartment around him. ...It occurred to me that just possibly there is a way to dissolve those threads...'

Pretty interesting stuff, eh? This is exactly how I look at my time during a reenactment. Dissolving those threads that connect me to the present (or future, however you would like to put it) is always at the forefront of my mind while I am at an event, even with the modern patrons about. I can see through these reminders of the 21st century, so-to-speak. I do not ignore them, of course, but I can over-look the fact that the visitors are wearing modern clothing - I am learning to bring my mind to that level. Actually, I have a much harder time with the period-dressed reenactors acting like their 21st century selves rather than their 19th century counterparts.

This is what I believe we all need to work on as living historians. Nothing ruins that moment like seeing the take-off-the-period-clothing-and-put-on-the-sweat-pants crowd after the event is closed for the evening to the general public.
In our camp, instead, my son will pull out the guitar and sing period tunes such as Lorena, Wayfaring Stranger, Goober Peas, or Just Before the Battle Mother (among others), or my other son will whip out the fife and perform Road to Boston or some other classic of the era.
And, as evening turns to night, sitting around the fire can keep you "in the moment." Members in our camp stay in their period clothing throughout, and then some of us - myself included, will put on period nightclothes at bedtime so as to awaken the next morning already "there." My time in the past continues for as long as I let it, or until someone has to, unfortunately, remind me (if you know what I mean). 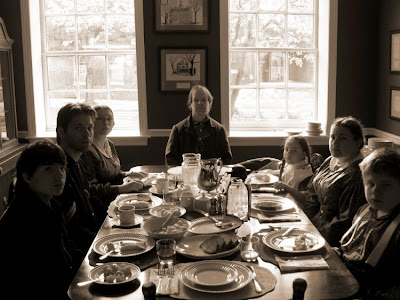 My family and I eating breakfast at the restored Tillie Pierce House in Gettysburg April 2008. We were in our period clothing the entire time there and stayed at the Tillie Pierce House - now a bed & breakfast.
Note: nothing farby in this image.
Were we really there?
Can you imagine if every participant at an event did their best to practice accurately the authenticity of the early 1860's? Who knows? We might even be able to create a time warp in that alone!!
Happy time-traveling!

Good post and quite thought provoking. I'll have to see what the Mister thinks about it, he's the science and sci-fi guru around here! It will give us something to discuss over lunch. ;-)

Thank you very Much Mrs. G.
I would love to hear his take on what Mr. Finney wrote.

My husband and I had our photo taken in 1960 just after our marriage, we had a lovely day at Greenfield the highlight of the day was the visit to the tintype studio thank you for lovely memory. Sincerely marina McNair Harvey