The Last Mourner for Lincoln

I have a true reenacting tale I'd like to share. It's about my daughter and President Lincoln.
My daughter, Rosalia, at her current age of 8 (as of this year of 2009), has been involved in living history most of her life. She doesn't remember not reenacting. And she realizes that reenacting is when we pretend to be living in the old days, without electricity, cars, or TV's. This she knows and understands well.
Anyhow, it was at the Jackson, Michigan event, Michigan's largest Civil War event, when Rosalia was just 5 years old, and she and her little friend, Elizabeth, were watching the contra dancing at the ball. In fact, as young as they were, they even gave it a try themselves. They were lucky enough to dance a bit with none other than President Lincoln himself (portrayed by living historian Fred Priebe), of which my daughter later told me, "President Lincoln told me and Elizabeth that we were the prettiest girls at the ball!"
That made her night!
Mr. Lincoln was present at numerous other events that we participated in before the end of that year's season, so my daughter was able to visit with him a few more times before winter hit.
Jumping ahead a couple months and she was now in school - half day kindergarten. She went to school in the morning and was home with me in the afternoon (I didn't begin work until 2:30, and that gave she and I wonderful daddy-daughter time).
So here we were, doing what any father and daughter would be doing....watching the History Channel to hopefully find real history to watch, and it just so happened that a show about President Lincoln was on. Well, it explained how Booth sneaked up behind the 16th President on the fateful night in April and, well, changed history.
As we were watching this, I glanced at Rosalia and noticed a tear running down her cheek. I asked her what was wrong, and in her tiny 5 year old voice, she cried, "I didn't know Mr. Lincoln died!" And burst into tears!
And then it hit me - she never differentiated the reenactor Lincoln with the real president Lincoln! To her, they were one and the same! 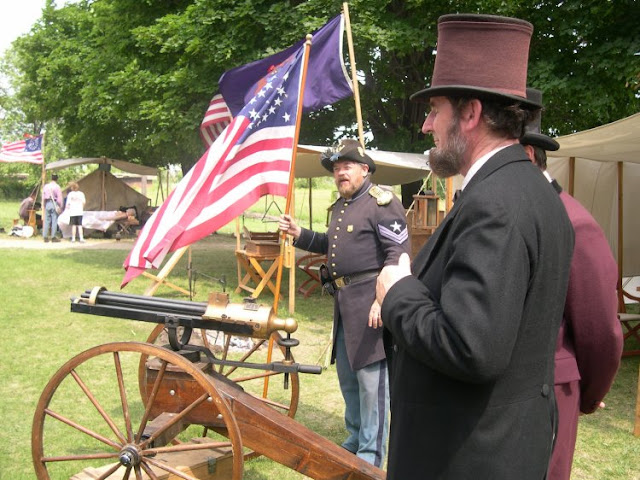 I gave her a hug and explained that the Lincoln she knew was just pretending, just like we pretended to live during the Civil War and that the actual President Lincoln died 140 years earlier - "way before even grandma was born!" I told her that the Lincoln she knew was very much alive and that she would see him at the next reenactment.
It took a few moments for it too sink in, but once it did she was as happy, but still not 100% convinced.
Believe me when I say that at the very next reenactment, she made sure Mr. Priebe - I mean, Mr Lincoln! - was there!
Of course, Fred was touched when I told him this story, and it has become a favorite of ours to tell at gatherings.

How neat that my little girl truly felt the pain of losing President Lincoln here in the 21st century like none of us will ever experience!

What a sweet story! History will never be dull and lifeless to her, she already knows that it's alive!

I can so picture Rosalia doing this...