I was sick on Sunday last...very sick. My 'cousin' thought I had scarlet fever, but my 'wife' felt I had the summer fever instead. Either way, I had a fever and was put into what is normally the dining room day bed, where, as a healthy soul, I usually try to take a quick nap after a hearty dinner, before venturing out to continue the afternoon work at the mill. Unfortunately, since I was feeling rather poorly this Sabbath day, the day bed was used as the sick bed so I could be nursed back to health. The dining room location was chosen so family members could watch me closer to ensure I was well taken care of instead of being in an upstairs bedroom, so far away from everyone. It was also a very airy area on this warm summer's day, allowing the breeze to flow throughout, which helped to keep me comfortable. While in the sick bed, I was given medicine - feverfew mixed with lemon and water - and since I could not lift my head very high, an invalid cup was used so the medicine would not drool out of my mouth. 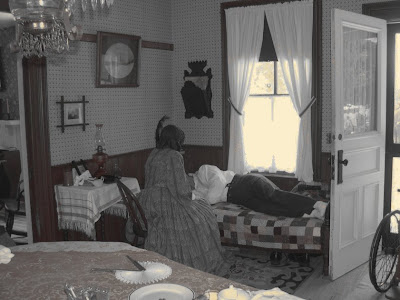 Yes, that's me lying on the sick bed with my 'wife' nursing me back to good health!
The local preacher, as well as a friend, stopped by for a visit - I was concerned when I first saw the preacher at my bedside for it made me feel my time was nigh. Thankfully, it was just a visit to make sure I was on the mend.
Another visitor suggested that I may have had too fine a time the evening before, but I most assuredly let him know that my 'wife' would certainly not have been caring for me in the kind way she was if I had taken on an evening filled with the kind of spirits that could affect the mind and body in drunken ways. And, as my family and friends know, I belong to a temperance society and do not partake in the devil's water!
I was so well taken care of by the ladies of the house that by the end of the day I was up and about, almost back to my normal self. Luckily for me, my 'wife' was correct - it was the summer fever and not scarlet fever as my 'cousin' suggested.

Thus was my day at Waterloo Farms in Waterloo, Michigan on Sunday June 28. The above is most certainly true. Well...except for the the fever part - I had no fever. And I was not given feverfew with lemon and water to cure my illness; it was, instead, simple hand-squeezed lemonade. However, I did take the pretend medicine by way of an antique medicine bottle, which was then poured into an invalid cup, and then finally given to me by my 'wife.'
Oh yeah...by the way...neither of the two ladies in the room with me were my cousin or my wife - they are both members of a civilian Civil War era living history organization I belong to, the Michigan Soldiers Aid Society (MSAS). The MSAS are a wonderfully authentic period group of social historians who take pride on accuracy in presenting the everyday life of folks living in the early 1860's. Last year, we in the MSAS presented a mourning scenario throughout the reenacting season at numerous locations.
This year our project is home remedies.

We take this sort of living social history very seriously...more serious than many other reenacting organizations I have seen. We strive to place ourselves right there - in the past - a virtual form of time-travel. For instance, at the above event I portrayed a feverish man-of-the-house - - - I did this while in an actual period house (built in the mid-19th century) lying on a real day/sick bed, in the company of women and men fashioned in the early 1860's clothing styles, surrounded by period-correct antiques and decor. And, for the most part, we all maintained a 1st person persona throughout. This was definitely more progressive than most events I usually participate in. And, because of our want for this kind of period-correctness, the MSAS membership is allowed to use, a number of times a year, actual 19th century structures in various locations while practicing period correct presentations.
Lying on this day/sick bed for nearly five hours, all that I could see was my life as it might have been had I lived in the early 1860's - there was not a person nor an object within my site that was not of the era...that is until we took some time to pose for pictures using our pocket tintypes.
It just doesn't get any better!
It's this sort of living history that I strive to attain at each event I attend. I mean, I felt that I was there. Crazy? Perhaps. Was I actually there? Naw...I know better than that...but, mentally, I was there! Kinda like in Jack Finney's time-travel story, Time and Again, I used a sort of self-hypnotism.
And it worked - - -
Unfortunately, it does not happen as often as I would like. But, when it does happen, it keeps me wanting more and more. It's these smaller living history events that so many reenactors feel aren't worth going to that end up being the best. I'm glad they stay away, to be honest. Those that do attend, such as the MSAS - as well as 21st Michigan members - take our form of time-travel seriously and do not want it ruined by others who choose to complain.


~~~~ ~~~ ~~~ ~~ ~~ ~~~
Another exciting 'time-travel' excursion occurred recently. Well, not really time travel...but a neat historical experience with a few 'moments.'
A little over a week ago, my wife and daughter and I took part in a movie shoot about the town of Corinth, Mississippi in 1862, which is just outside of Shiloh, Tennessee. We were just extra's - background townsfolk walking the wood-plank sidewalks of the streets of the town. It was filmed at Crossroads Village in Flint, Michigan - an open-air museum not unlike Greenfield Village (Crossroads Village) - only more authentic looking, with it's dirt roads and above-mentioned wood-plank sidewalks. It was perfect for what the director needed to replicate Corinth 1862. The docu-drama is to be shown at the Shiloh Battlefield once the film is completed early next year. 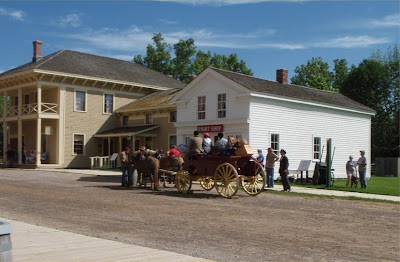 At the film shoot at Crossroads Village
I bring this up because this was also an I was there moment. Movie cameras and all. But, it was what I was surrounded with - period-correctness at its finest: the structures, the grounds, and the people who were being filmed - that made it seem like I stepped into the past. You see, in the wardrobe department were ladies who are sticklers for accuracy...stitch counters (I use that term lovingly here!). I am proud to say that no additions or suggestions to our clothing were made for me and my family. We were "spot on," as the one woman said. And we were chosen to participate in three different background scenes! We were thrilled!
As you know, I work hard on our authenticity and study social history on nearly a daily basis, so I am very proud and happy that we were selected to play a part, although a very small non-speaking background part (for we are not actors). It helps me to feel accomplishment, I guess. 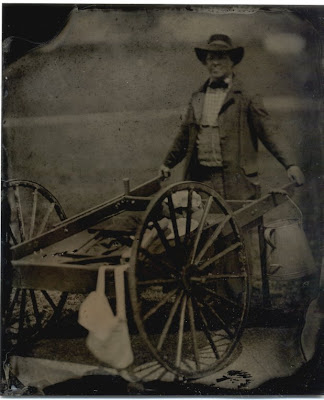 - Image of me taken with an 1860's camera by Marty Butera - April 2009 -
Would you know this was taken in the 21st century if I didn't tell you?
Anyhow, I tell you this because if that certain 'time-travel' experience is what you hope to attain while at a reenactment, try some of the smaller events. They can be some of the best places to work toward meeting this goal. And work with your group for authenticity as well as 1st person.
Self-hypnosis can truly complete the picture.
I cannot tell you how rewarding the outcome can be.
Believe me when I say that you will come as close as any sane person can to time-travel.

Just make sure you don't accidentally leave a penny with a modern date on it in your pocket, it will snap you out of your time-travel real quick! ;)

Very cool. I love those events that can take advantage of period "stuff" and concentrate on the life of the people left at home. Good job.

Ah Ken, I got excited when I read about the feverfew and then you pulled the rug out from under me! ;-) We use herbs almost exclusively even for Mr. G's asthma. Do you have Culpeper's Color Herbal? It is an excellent resource that I use a lot that also would have been in print during the 1860's. I'm glad you had such a good time, thanks for the post!

Paris -
We really had a great time. One of the best ever.
I'm sure the 'medicine' given to me did not look like the real feverfew at all. But it was enough to show (and fool) the public.
By the way, I am not familiar with Culpepper's Color Herbal. I will look it up - Amazon usually has everything. Thanks for the tip.

I just wanted to let you know that I really enjoy reading your blog! I have just started learning about reenacting and I am going to try it out for a day with the 4th infantry this weekend.They were so nice to envite our family to come out and dress us up. Your blog makes me even more excited to try this hobby out with my family.Thankyou

Thank You Mommysully!
You're going to Fort Wayne? Make sure you stop in at my "post office" and say hello!

You were there. You just didn't believe it. The " threads " will always hold you to where you are. Only a select few can break them all. Don't give up keep trying. Time travel is possible and has been achieved. There has been a on going "Project" since 1962. You are on the right track. You must believe...