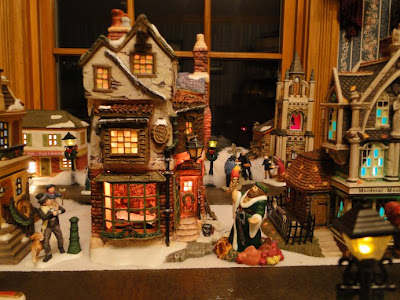 Please click HERE for the 2011 set up)
I spent pretty much the better part of my day today setting up my Dept. 56 ceramic Dickens Village lighted houses. In fact, I began around 6:30 this morning and, except for church and lunch, I didn't finish until 12 hours later.
Why am I putting up Christmas stuff on November 1st? Well, since this village takes so long to do, I'm not going to take 12 hours to put it up only to take it down a few short weeks later. So, it goes up right after Hallowe'en and stays up until the first part of January.
I've been collecting the Dickens Village series since 1989, the year I bought my first lighted house - the original Flat of Ebenezer Scrooge. Since I was (and still am) a major fan of the Charles Dickens' classic "A Christmas Carol," I thought having this lighted Scrooge home was the coolest decoration ever. I remember telling my wife how "I'll buy one house a year." 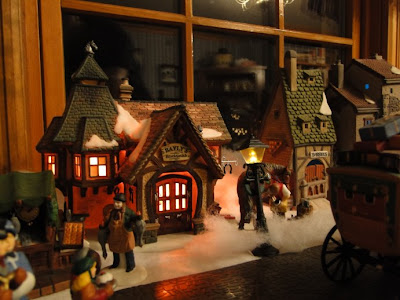 Yeah, right.
The following year we added a couple more houses to my one house collection, and each year thereafter my Village grew. And grew. One year - 1994, I believe - I used my Hudson's charge card and bought a whole slew of houses and accessories, much to the frustration of my beloved. Yes, she was angry...real angry... boy! I sure didn't do that again! 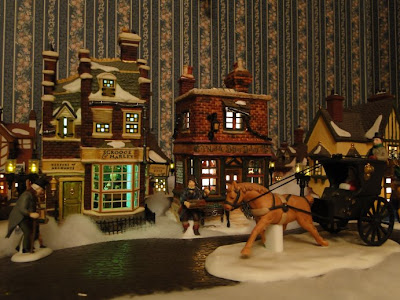 Except for a couple of pieces from other Dept. 56 series, I have mainly stuck to the Dickens Village, and I always have tried to keep it in the theme of Dickens' "Carol:" buying the homes of Cratchit, Fezziwig, Nephew Fred, and the Scrooge & Marley Counting House, etc., as well as structures from other Dickens novels, including the home of Mr. Brownlow (from 'Oliver Twist) and The Old Curiosity Shop. There are also buildings of businesses that every English village had - a blacksmith shop, a pub, a tavern, a coal merchant, and many others.

And then there are the accessories...all of the characters from "Carol" including Scrooge, Cratchit, and the ghosts, as well as a few from the pages of Oliver Twist and David Copperfield. Plus, vendors of all types, townsfolk, horse and carriages, "gas" street lamps, cobblestone roads, bridges, trees...the list goes on and on.
Little did I know when I bought that first Scrooge house that I would eventually have enough to easily fill four 6 foot tables.
The last year I put the complete collection on display it took me two full days! And it took almost as long to take it all down. 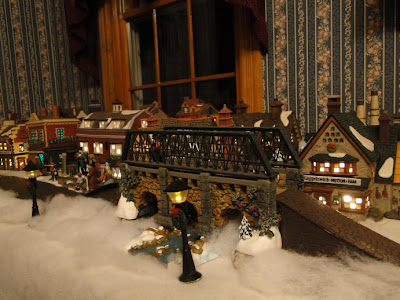 The last few years, however, I cut way back in both the purchasing of and the setting up of my village. It was just too much - too large. Even with a decent size room it was over the top. So, instead, I put just a few of my favorites on the shelf just to have them out.
I didn't like it. It wasn't the same.
So, what do I do?
The thought came to me to expand on my 'favorites' idea and to put out a decent display, but with only two tables instead of the four that I used to have. That would mean cutting out quite a few of the houses and people.
But, it's better than only four or five houses, right? 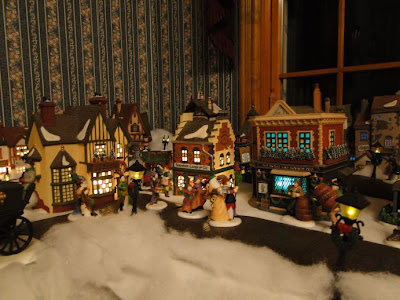 So-o-o, that's what I worked on all day today; figuring out what goes on display and what stays in the box for another year.
When family members saw me bringing bag after bag filled with the items up from the basement, my two youngest kids were thrilled, and my mom - who lives with us - was very excited.
So now, for the first time in three years, I have my Dickens Village back up...yes, it's condensed...but it's there. And it looks really nice.
Maybe one day I will put my complete village out.
Until then....this is it! 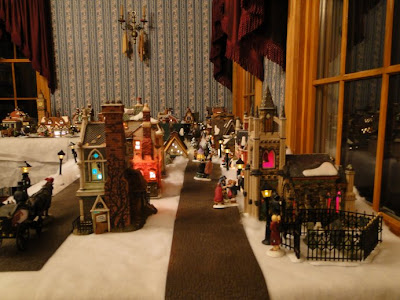 Seen here is roughly half of my Dickens collection. The rest will have to wait for another time...

I LOVE IT! I adore miniatures for one thing...but I love Christmas Carol also! Are you going to see the new animated A Christmas Carol with Jim Carrey? Looks like a blast. I've always wanted a big lighted-house world...but WHERE would I put it??? That's a conundrum.

Hi Amy -
Thanks!
That's my conundrum as well!
Yes! WE plan to see the new "Carol" hopefully at the local IMAX - we saw the previews with 3-D glasses and it was awesome!!

Wonderful blog! Always great to see such a great presentation of Department 56! Would you be interested in adding a link on your site to ours? You can review us at http://www.department56corner.com

Thanks and keep up the great work!

Hi Ken,
Thank you for the link to this! I had no idea what you were referring to in your comment on my blog! Ha Ha, no we don't have anything like this---our 18thc. cape is tiny---I think we'd have to move out if these moved in!
It's nice to see them here though---so charming!
Best,
Mary

I absolutely love all your different houses, I think that Department 56 collections are just so great! They are especially nice to have around Christmastime, they make such cute decorations. Right now my collection is still quite small, and it is mostly because it is hard for me to find the houses I want. Do you have any suggestions on where I can find some good houses like the ones you have? http://www.feeneys.com/Dept56_MAIN.shtml

Thank you for your kind comments Julie.
I shop thrift places, garage sales, and, of course, Ebay and Craig's list, and I usually can find something at decent prices.
Once in a while you can find something pretty cheap on Amazon.com.
Good luck!!