The World of a 19th Century Midwestern Tavern


Here is another blog in my Michigan / Midwestern social history series, once again taken from the Greenfield Village blog I have. Even though I do have a separate blog dedicated to the Village, I realize that there are many wonderful social history facts and stories that I feel readers who may not read that blog might find interesting. I feel it's stories like this that helps to bring the past to life.
I do hope you enjoy it.


The Clinton Inn aka The Eagle Tavern 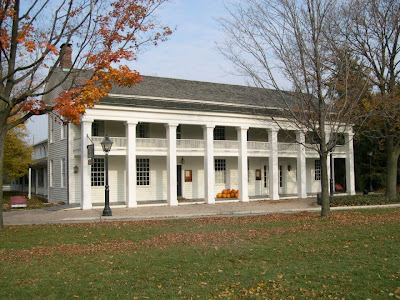 Early in the 19th century, a stage line was operated between Detroit and Tecumseh on what was originally an Indian trail. With the coming of the early settlers from the east, however, it became the settler's route as well. As traveling increased and roads were made possible for stagecoach travel, taverns were built along this route. The Eagle Tavern, as it was then known, was built around 1831 in Clinton, Michigan, and served originally as the first overnight stagecoach stop between Detroit and Chicago, offering food and drink for the weary travelers, back during a time when horses were the main mode of travel.
Eventually, the road extended to Niles, Michigan in 1832, and then, by 1833, on to Chicago, which became the Chicago Turnpike, and eventually Chicago Road/US 12 (http://www.us12heritagetrail.org/).
Semi-weekly stages were tried first, but daily coaches soon followed and, before long, there was double daily service, with extra coaches often necessary. 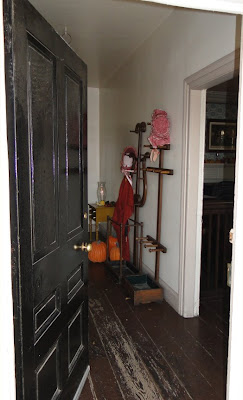 I should like to present here a couple of descriptions of what it was like traveling by stage on this Detroit to Chicago trail. This first one is in the words of Levi Bishop from 1835: "I started west from Detroit in a stagecoach. I had to secure my seat three days in advance. This was when the land speculation fever began to rage somewhat extensively. When the time came, I started west on the old Ann Arbor Road. We broke down once on the way, but there happened to be a wagon maker on board and he repaired the damage in about 15 minutes. We made nine miles the first half day."

Part of the road was corduroy and vehicles broke down, and sometimes stagecoach passengers had to get out and walk. This sets the stage for our second traveling story:
There is a story told of a stage that left Clinton's Eagle Tavern for the west one morning loaded with passengers. The road was very muddy and the coach had managed to get a mile from the village. The passengers walked back to the inn to spend the night, and early the next morning returned to the coach. During the second day it got three miles from Clinton. Again, the passengers returned to the Eagle Tavern. On the third day the coach must have reached another tavern, for the passengers did not return. 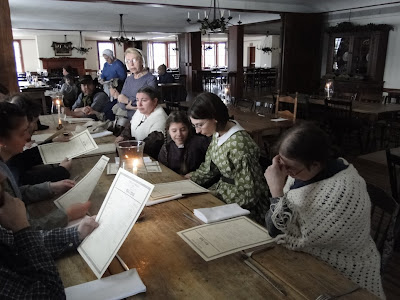 The folks that stayed at the Eagle Tavern never left for want of food. As stated, in part, from a Village hand out:
"The foods that tavernkeepers offered came from local farms and grew wild in the countryside, and tavern menus varied tremendously with the seasons. Fresh fruits and vegetables were available only at harvest time, and winter meals relied heavily on foods preserved by salting or drying. Since Calvin Wood, proprietor of the Eagle Tavern in 1850, was also a farmer, much of the food that he served might have come from his own nearby farm.
As quoted from a Detroit News article from 1927:
"People nowadays would be appalled to see the quantity of food that was served then. There were never less than three kinds of meat. There were side dishes of vegetables and salad. Red cabbage was a favorite for salad because of its decorative appearance. Then there were pickles and crackers and cheese always on the table."
Also, the article continues to tell of jellies and preserves, five or six kinds of cake, and two or three kinds of pie, particularly mince pie. On each table were two casters of pepper, vinegar, mustard, and spices in brightly polished containers.

Once again, from a Village hand out:

Alcohol consumption during the 19th century reached a peak that has never since been duplicated, so it is not surprising that the American temperance movement came into being during that time." 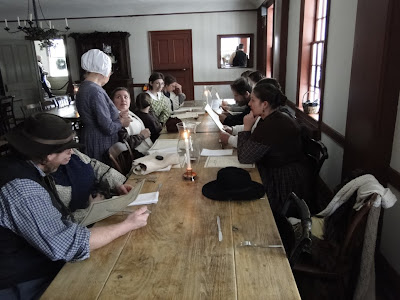 Besides being a stopping place, the tavern was also famous for its dance parties and balls.
One who lived near the "Eagle' (as it was affectionately called by the locals) explained in a letter to Henry Ford one her most pleasurable experiences while at the Eagle Tavern: