“Welcome! What a drearily wonderful day to spend in a cemetery, wouldn’t you say?”

And that’s how I began the presentation for the cemetery walk my daughter, Rosalia, and I participated in at the Clinton Grove Cemetery located in Clinton Township, Michigan. One of five stops along the tour, we portrayed father and daughter Adolph and Mildred Gutschow and, because I have never seen a child portray a deceased child at a cemetery walk before, we were quite the hit! 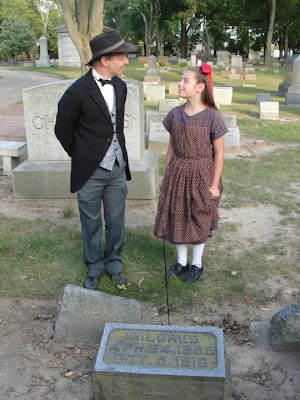 People were very touched to watch and listen to Rosalia as Mildred stand by 'her' tombstone and speak in 1st person as the young girl who died in 1910 at the age of 11 of a stomach ailment. I then would let each group know just how tough it was for a parent to lose a child, but not before stating that I hoped that no one in my presence had ever had to bare such a loss. One older woman, after one of our 17 (!) presentations had ended, came up to me, grabbed my hand, and said, "I just wanted to tell you that I have lost a child and you are so right that it's the hardest thing for a parent to go through. You and your daughter did a wonderful job showing that. Thank you." It nearly brought me to tears.
But, it wasn't all sad...we tried to have a little lightness as well, like when 'Mildred' spoke of her annoying brothers, or when one time early on she forgot one of her lines. 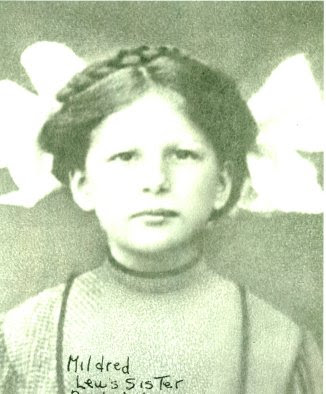 After a brief moment in thought, Rosalia - as Mildred - told the group, “Hey! I’ve been lying in this cemetery for a long time! I'm allowed to forget!” The people roared!
As Adolph, I was a clothing store owner, and I made sure to make a comment to the women in the audience by stating that they needed to come to my business to get a proper dress instead of wearing their husband's britches!"
Again, lots of laughs.
One of the neatest things happened when a few of the descendants of the Gutschows were in one of the tour groups and they told us how good a job we did and thanked us for allowing them to "see" their ancestors.
It's also kind of interesting in the way people come up to you and speak to you as if you are/were the person buried come to life. 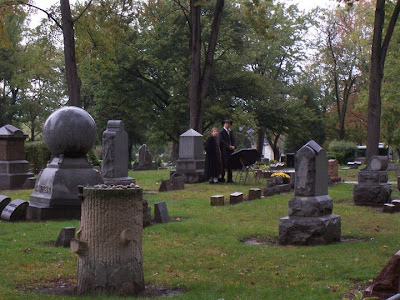 I have been doing cemetery walks now for eight years at a couple different cemeteries in the area. In fact, I will be doing another toward the end of this month. It really is a great way to help people understand their local history as well as showing honor to those that have been long deceased, and in some cases may have been forgotten.
.

Posted by Historical Ken at 8:30 PM

How interesting. I would love to go on a cemetery walk, but I doubt there are any where I live. I will have to check into it. I must say your daughter is becoming quite the young lady. You must be very proud of her.

Trixie -
Yes, I am very proud of Rosalia. She is becoming quite the "living" historian at the ripe old age of 9!!
May I suggest that if you belong to a historical society that maybe you might head a cemetery walk up yourself? If you decide to do so and have any questions, I will be very happy to help you out.

We, the friends of Hearthside House are planning a Mourning Tour at The house and then a tour to a local church cemetery. We will be teaching the mourning ritual of the 1800's.I have always found cemeteries very beautiful and peaceful. "A great place to teach history!"

Miss Estelle -
Kim Parr, the director of the Crocker House Museum in Mt. Clemens, Mi., (http://www.crockerhousemuseum.com/CemeteryWalk.html)
is a mourning historian and does a wonderful presentation.
Please let me know how your tour goes!
Thanks!

Great post. Wife and I are hoping to do a ghost tour down in colonial Savannah. Isn't it wonderful when your children want to be a part of your hobby and learn?

Also, thanks for your kind comments on our blog. Somehow I deleted your last post as 'spam'. Not sure how I did it, but please, no offense.

I read this post a year ago and somehow didn't comment. It's so nice that you and your daughter got to do this together! I bet it was really touching when the actual decendants complimented you. I have yet to see a cemetery walk, and will have to make sure to find one.

May you email me regarding the Raby lineage, it's Robert Raby and Elizabeth Dorr that interest me. Did they just have the ONE son and no other children? If he was the only child I have a mystery of a love child that might interest you greatly.

Hi Lottie -
I did send you an e-mailed reply.
Thank you.