I'm Having a Writer's Block - So, Here Are A Few Pictures From My Visit To the Museum

I have been working on numerous postings but I am having loads of trouble completing them. I don't know what it is - I begin to write then all of a sudden I get writer's block and I stall.
Eh - - such is life, right? I'll get at least one or two of them done soon...promise!

In the meantime, in keeping with the historical nature of this blog, I thought I'd post some photos of my recent trips to the Henry Ford Museum. Mr. Henry Ford began collecting objects at the beginning of the 20th century - everyday objects from his youth. What began as a hobby turned into an obsession. Where most people of his caliber would collect - the great art work of the world for example - Ford wanted little or nothing to do with that sort of thing. And aren't we the lucky benefactors of his social history collection!
It didn't take very long before he realized that he needed space to house all of his treasures. But, warehouses didn't give him the opportunity to enjoy his findings. Without getting deep into the story, he eventually built what is now the Henry Ford Museum and Greenfield Village. Yes, they are two separate entities in one very large complex. (For more on Greenfield Village, please click here).
He built the facade of the museum as an exact replica of Independence Hall in Philadelphia.

In fact, here's a photo of the original building: 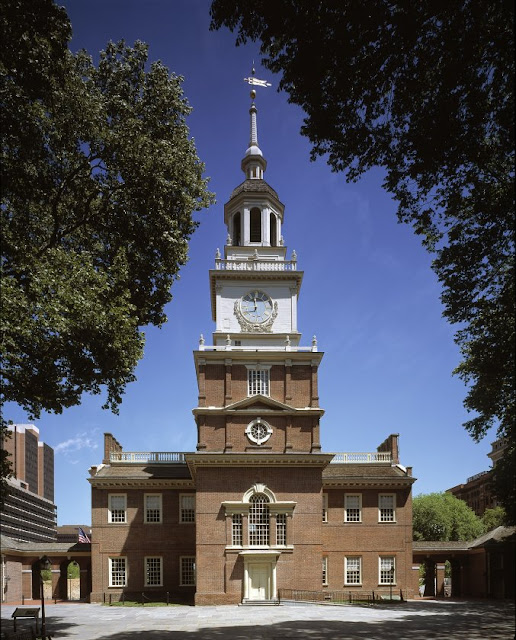 and here's the replica in Dearborn, Michigan: 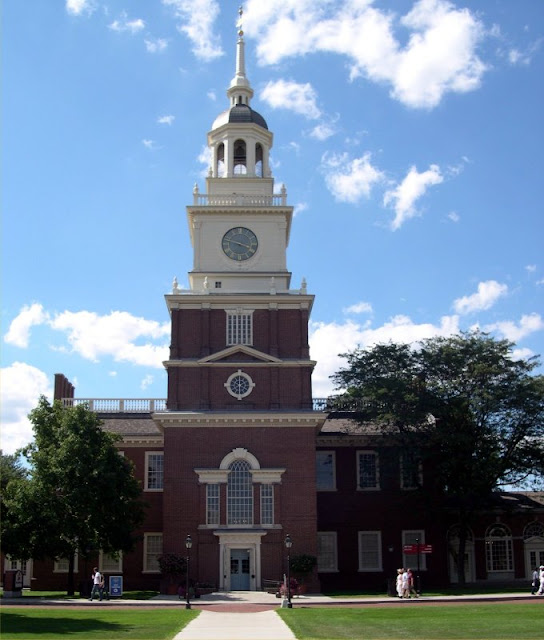 Pretty amazing, huh? Ford had it built exactly as the original, and he spared no expense in doing so.

There are literally millions of objects inside this building. The following photographs only show a minute portion of the collection held here. Actually, most are photos of furniture, which I am getting into more and more lately.
A picture is worth a thousand words, right? So here's an encyclopedia!
I hope you enjoy them. 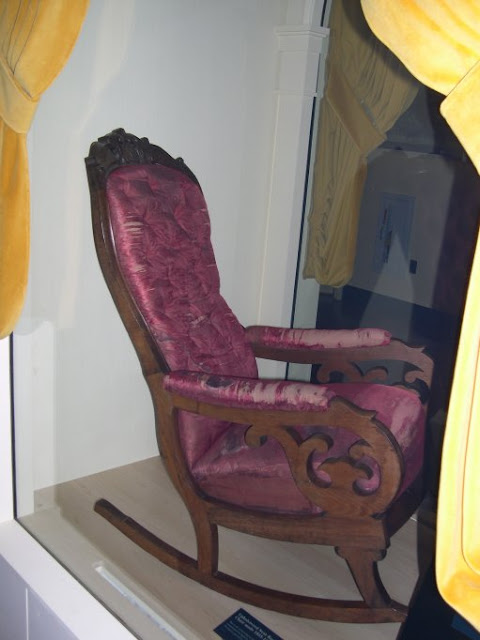 This is the chair - yes, THEE chair - that Abraham Lincoln was sitting in when he was shot by Booth at the Ford Theater in April of 1865
. 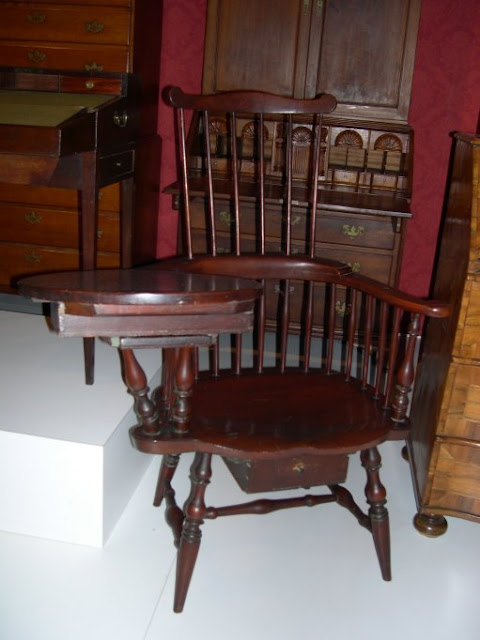 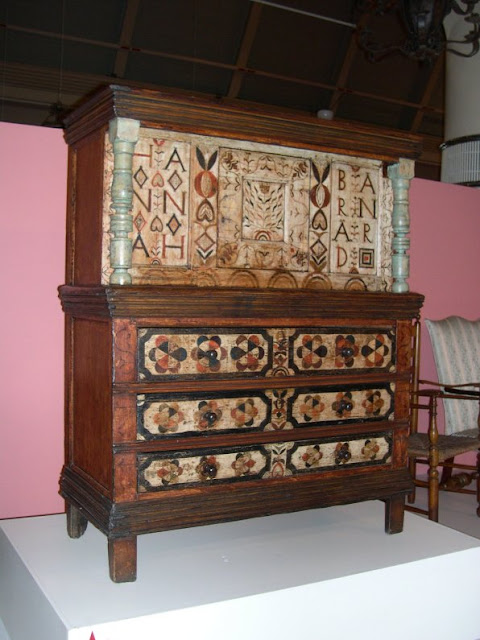 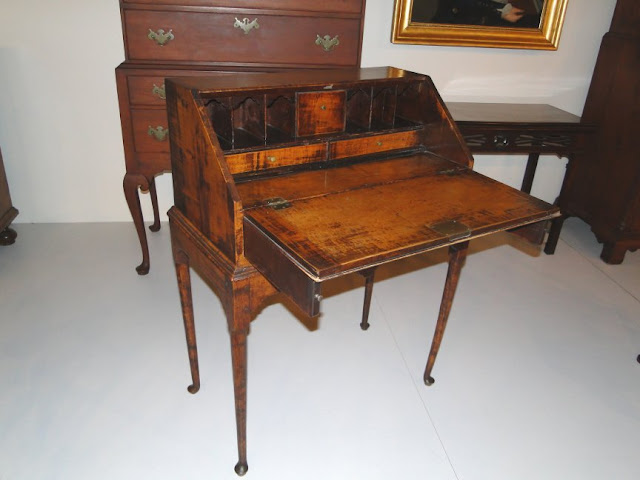 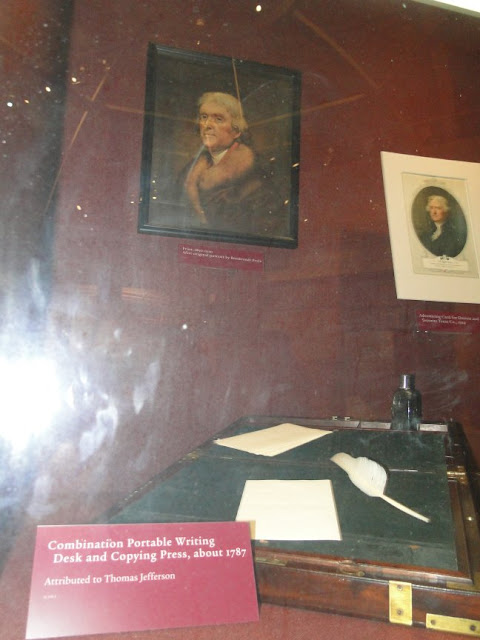 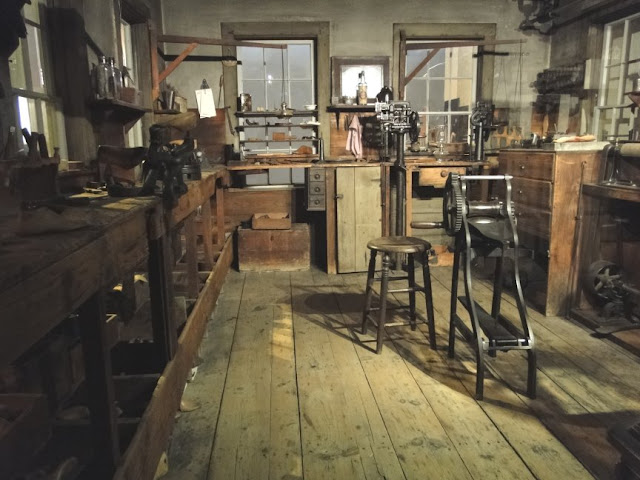 Inside of the Currier Shoe Shop - 1880's. This building used to be inside of Greenfield Village. For some reason it now sits - intact - inside the indoor museum
. 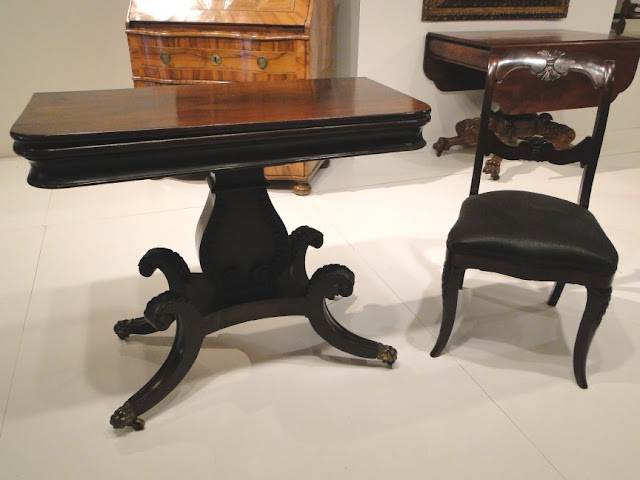 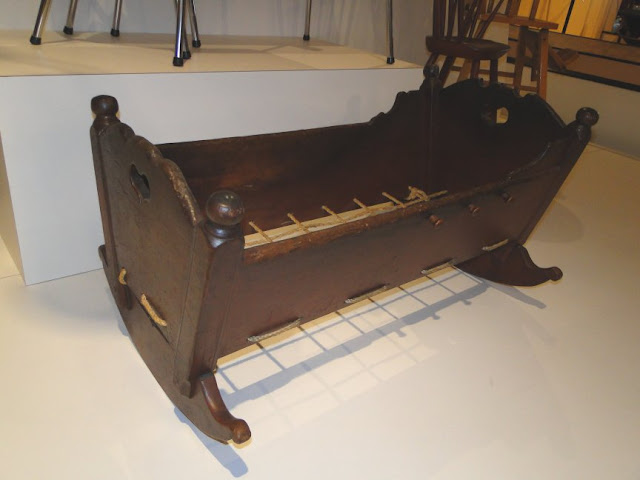 How the Henry Ford Museum came to own the pieces once owned by Mark Twain/Samuel Clemens in the next photographs documents the rich legacy the collections hold. Clemens’ daughter Clara was married to Ossip Gabrilowitsch, conductor of the Detroit Symphony Orchestra. A Russian emigre, he was stricken with stomach cancer and treated at Henry Ford Hospital. Gabrilowitsch’s stay was long and difficult; his care was costly. Henry Ford forgave the bill and in gratitude, Clara gave Ford these family pieces in 1936, and they came into the museum. The portrait is oil on canvas by Edoardo Gelli and was painted in Florence, Italy in 1904. The table was used by Clemens in his later years.The story of how 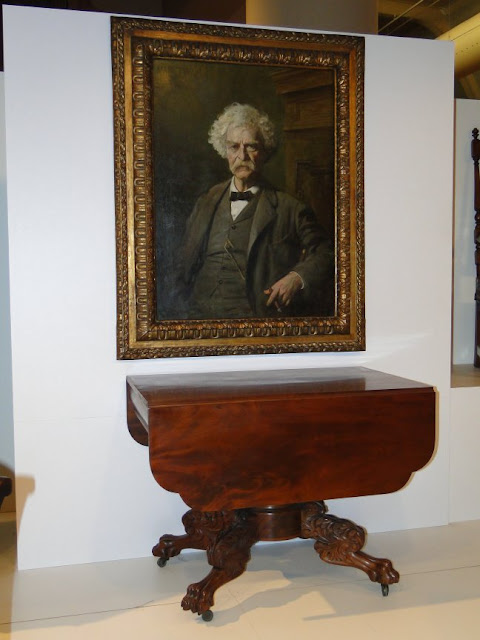 The Henry Ford Museum recently won, at auction, a letter from Twain/Clemens to the Governor of Missouri in 1904. The gist of the letter was Missouri-native Twain/Clemens responding to being asked if he would participate in the 1904 St. Louis World’s Fair, organized to commemorate the 1803 Louisiana Purchase. Regretfully Clemens, who was living in Florence, Italy at the time, declined the invitation because of his wife’s poor health. The friendly letter bears some of Mark Twain’s trademark humor. And, more significantly had a direct reference to the portrait in our collection. “Although I can not be at the fair, I am going to be there anyway, by a portrait of professor Gelli. You will find it excellent. Good judges say it is better than the original. They say it has all the merits of the original and keeps still besides.” 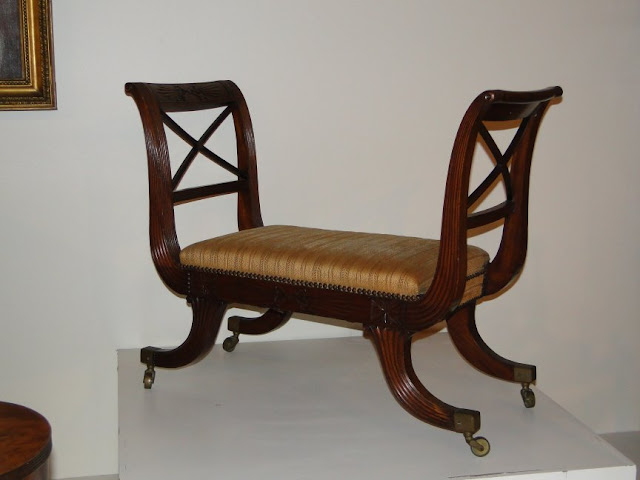 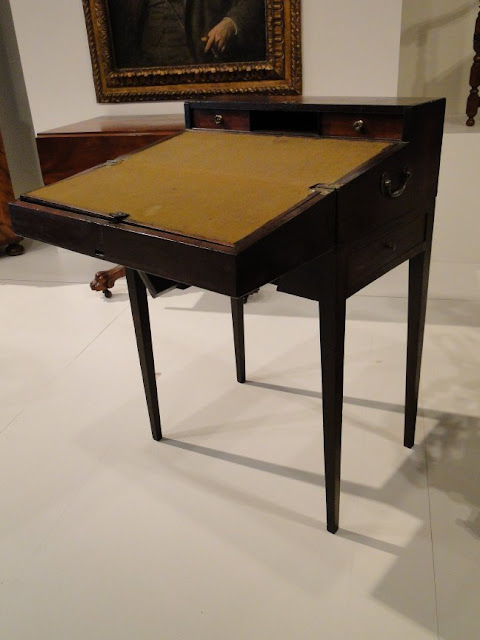 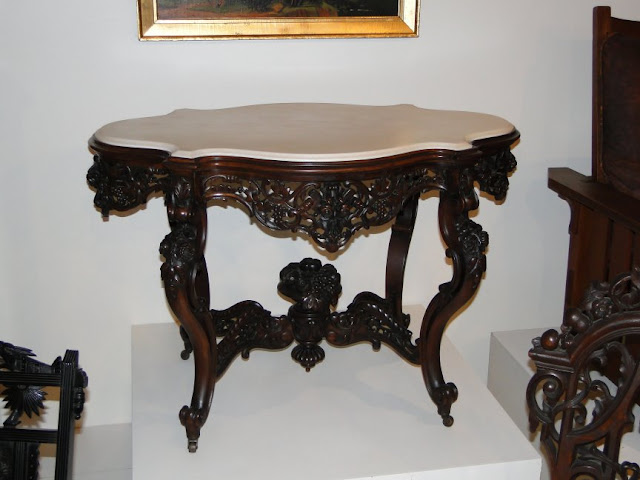 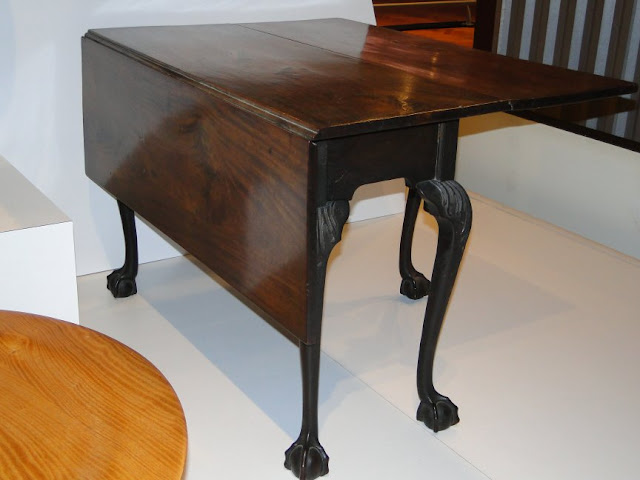 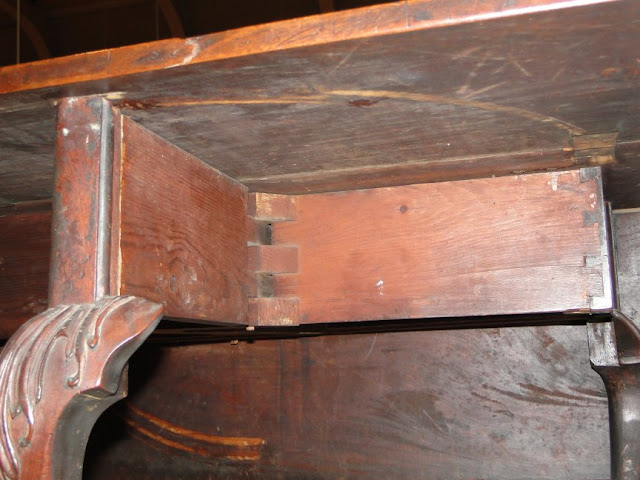 The underside of the above Drop Leaf Dining Table 1750 - 1775. Notice the craftsmanship and the well-worn wood from the slide bar that holds the leaf up 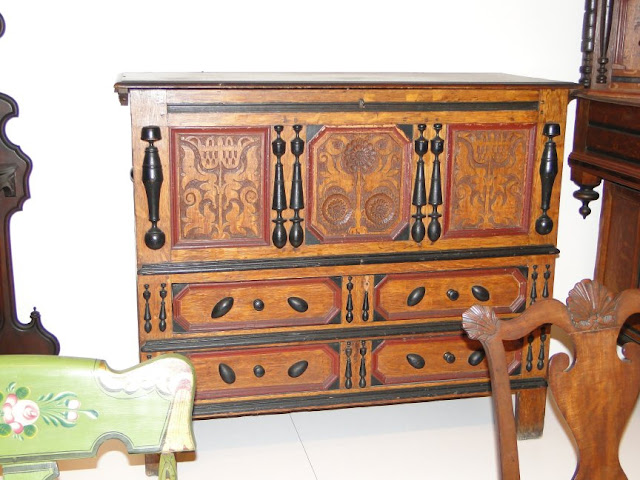 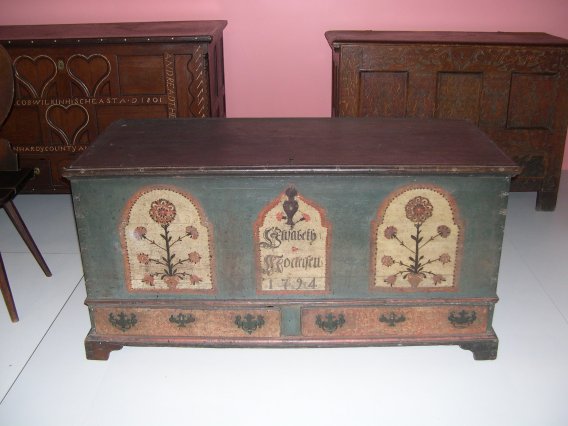 The Henry Ford Museum, along with Greenfield Village, are well-worth the trip to Dearborn.

What a wonderful collection! It's brought up a question, though...do you know much about mid-nineteenth c. furniture that you could share (post) with us? I know absolutely nothing, I am a very ashamed reenactor...lol.

Thank you Miss Virginia.
I do know some, but I'm not a furniture historian by any means.
It's really only the last couple of years that my interest in period furniture has grown.
I do plan a posting about the Hannah Barnard Court Cupboard sometime soon. That particular piece has a very interesting history to it.

Now, that Henry Ford was such a fascinating fellow! I really must visit the museum complex someday. I've heard great things about it, and your wonderful photos and insight only pique my curiosity further. Thank you for posting this. It will have to go on my to-do list!