My Favorite Place To Reenact 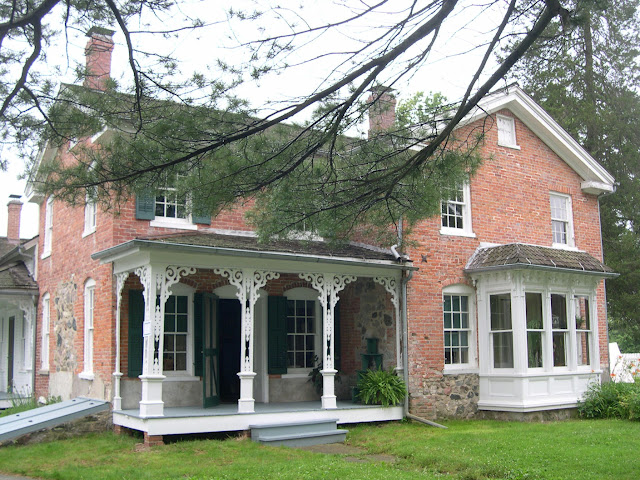 Our Farmhouse - okay, our home when we time travel

I have written numerous times over the past few years about what is consistently my favorite living history event, Waterloo Farm, located in Waterloo, Michigan. What makes Waterloo so special…? Well, for a civilian it’s comparable to a reenactor soldier in the military participating in a battle. That's his "high," so to speak. Now, for me to be able to reenact in a period farmhouse with authentic 19th century surroundings is my high. It’s my opportunity to “see the elephant.”
First off, the house, which was built in the 1850’s, is, as I stated, decorated authentically to the mid-19th century. It's also pretty much out in the country in the middle of nowhere, which is a good thing, for there is very little modern outside intrusions to ruin the atmosphere. Well, there is the modern street nearby, but that's not even noticeable, to be honest. So, with the wonderful surroundings it is a perfect opportunity where one can present themselves in 1st person, not only to the visitors who tour the place, but even when it's only those of us who reenact. 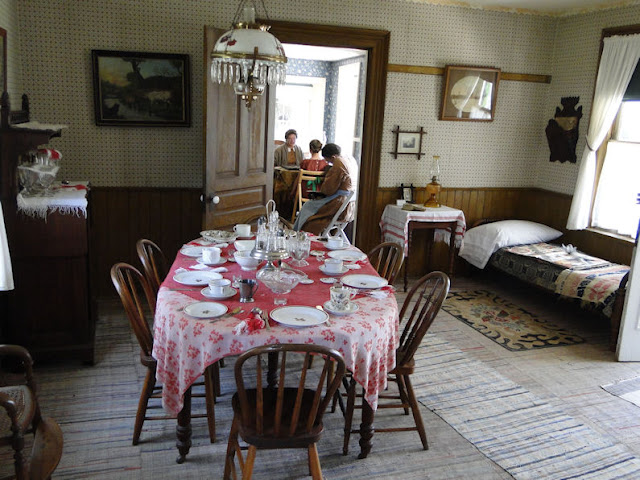 In this way we truly bring the past to life and try not to step out of the *zone,* if you know what I mean.
I think the historical society board enjoys having my wife & I and our family (including our domestic) here, for when we stepped out of our "carriage" and headed toward the farmhouse, the people that run the museum literally greeted us with open arms and said, “Welcome home!” Do I have to even tell you how that made us feel? For living historians, this is as good as it gets!
But, you know, it's because we have been actively using the farmhouse as our home for some years now - even at Christmas time - that they have continued to allow us to use this structure in the way we do. I mean, this place is almost like our home. And we make sure we follow the Waterloo Area Historical Society's rules about where to sit, etc. The President of the Waterloo Historical Society told Patty and I that when we are there to consider the house “ours” and we are to treat it as such.
How cool is that?
In past years we have presented ill health, mourning, and Christmas (how's that for variety?). So, this year Patty and I, with our two youngest and our domestic represented a family during a summer Sunday afternoon. 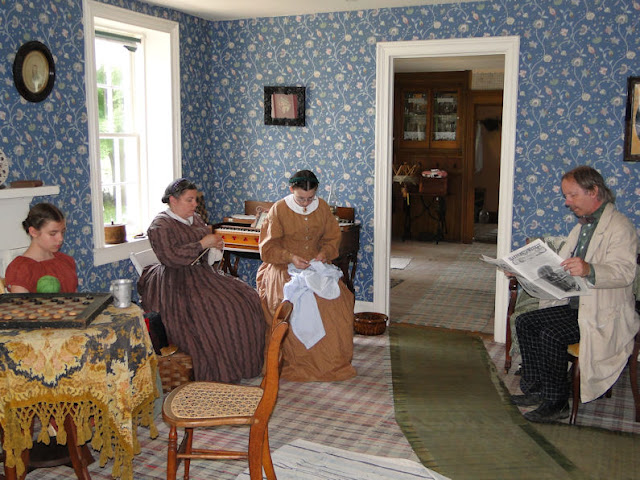 My wife and our young helper worked on sewing projects (as women would have done on a Sunday afternoon - very period appropriate for the 1860’s) while I read some of the latest news from the *current* (June 22, 1861) Harper's Weekly. We also had friends stop over for a visit as well. The patrons passing through enjoyed our presentation immensely as we showed them a slice of everyday life from the past.
I would like to add here that I am very proud of the young lady who portrays our domestic: her real life boyfriend showed up and was hoping to spend a bit of time with her. They did go to lunch, which was fine. But he was hoping for more time than that, but I denied it, letting her know there was work to be done. She then told him that she was at work and that she needed to finish her duties. 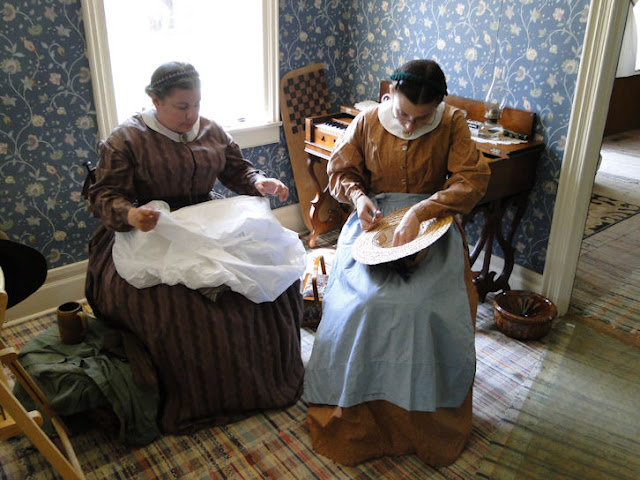 19th century realism at its best!


As a civilian living historian, this is my time travel. I am not amongst tents but inside an actual mid-19th century house living as close to who I am emulating as one possibly can.
It just doesn’t get any better!

How lovely. Isn't it the best to be able to have a structure you can "live" in?

Are there any Revolutionary Period re-enactments? Or WW1, WW2 ones. I wonder if any blogs are out there on those? That would also be interesting to be a part of some of that historical time. I suppose there are many great historical periods in which re-enactments could take place.

Love it all. Thanks for keeping the past, present! Richard at My Old Historic House

Thank you Annette and Richard!
Jimio - I'm not sure where you live but most states east of the Mississippi (and probably many west as well) usually have Rev War/Colonial reenactments, though the farther from the east coast you get the more sparse it becomes.
I've heard of WWI reenactments but only in Ohio. WWII is becoming more popular here in Michigan - - not sure about elsewhere.
I'm willing to bet that next year, being the 200th anniversary of the War of 1812, we'll see some of that era taking place.
Although I enjoy seeing some of the other eras come to life, I stick with mid-19th century. That's my favorite time period.

While working at Billie Creek Village in the farmhouse I actually catch myself referring to my actual home as "my other house". Sometimes I forget I don't really live there. :)