The summertime Civil War Days event at Waterloo Farm is always in my top three events for the season due to the 1st person type of reenacting that we practice. Because there are historic structures there, including the original mid-19th century farmhouse, a log cabin, and various outbuildings (and lots of land), it's a great place to bring history, almost literally, to life. In previous summer engagements here I had participated in various bring-the-past-alive scenarios such as home remedies, mourning, and showing everyday family life.
My wife, who normally accompanies me, decided to stay home this year and only my 22 year old son came along so he could do his military thing with the other boys in blue.
This year at the farm, however, was a bit quieter, more laid back, than it normally is. That's not necessarily a bad thing, for I had a pretty decent time with my time-travel friends, and I had my ever-present and ever-hidden - quick pull out and put back - camera on hand to record the historical activities.
I was pretty much the only male civilian there - no surprise, huh? - so I hung out with the beautiful civilian ladies for much of the day. The conversations, though heavy on women's speak, did come around to a middle ground discussion here and there enough to keep me involved.
So, anyhow, I would like to share with you all one summer's day in 1863 at Waterloo Farm in pictures, with circles and arrows and a paragraph on the back of each one explaining what each one is:


I also took a few photos of my son Rob as he spoke to visitors inquiring about military life. Note the way he is dressed - yep, he is out of uniform...no sack coat, sleeves rolled up, braces (suspenders) clearly in sight, etc. He reminded me of something I read recently in my favorite primary source book about the 1863 Gettysburg exchange, "Firestorm at Gettysburg," which gives the account of the great battle through the eyes and ears of the citizens of that borough. 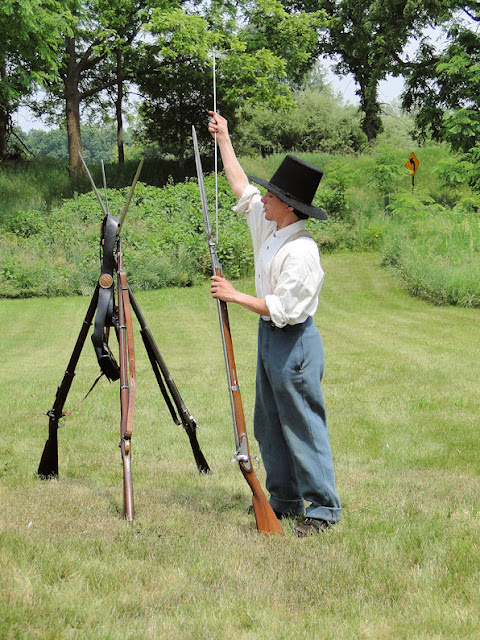 In fact, for you in the military heading out to 150th Gettysburg reenactment next week, I found this first-hand comment by citizen SAMUEL BUSHMAN pretty interesting:
“(The Union troops) went through the streets in the double-quick step, which is next thing to a run. Some of them had marched thirty two miles. It was very hot weather, and they’d thrown away much of their clothing. Often, they had very little on but their pants, and went right into the engagement hatless, shirtless, and shoeless." 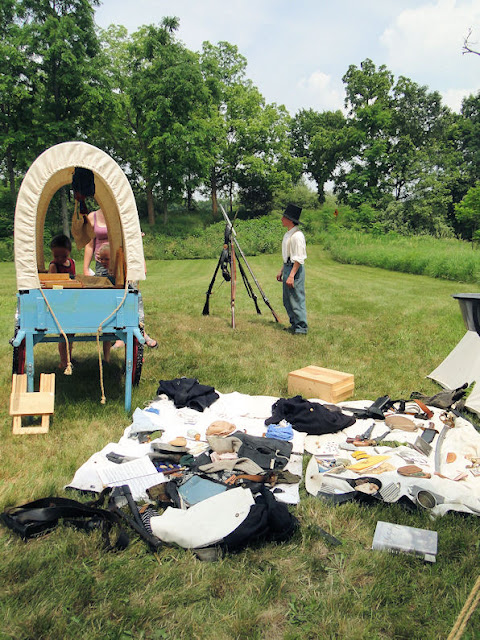 Farmer NATHANIEL LIGHTNER, who lived in the southwest part of town, also noted that the boys in blue were "pouring along the roads and through the fields, coming out of every street and alley and open spaces of the town, all rushing pell-mell forward, without any apparent order, with fixed bayonets, eager-eyed, stripped, perspiring and panting in the hot sun."

So...you want to be accurate? I would say these statements are a bit contrary to the reenactments, the movie, and even the paintings.

Waterloo is always a good time, whether we are attempting a sort of immersion experience or just sitting back and enjoying being in the midst of like-minded friends, as was the case this year.
Either way, we're still surrounded by history in sight, touch, and, in many cases, sound and smell.
And it doesn't get better than that!

If you are interested in reading about my past excursions at Waterloo, please check out the following postings: