Happy Independence Day! (Celebrating the 4th of July in a Colonial Way)

The 4th of July is quickly becoming my second favorite holiday; only Christmas garners more excitement from me. The more I study our Founding Fathers and of the birth of our Nation, the more excited I become in celebrating this Day of Independence. And I always seem to find myself spending at least part of the holiday at Greenfield Village (are you surprised?). This tradition goes back quite a few years for me and my family. But since 2010, I have taken it a step - or, rather, a leap - further by dressing up in period (1860's) clothing to visit the Village.
This year was no different...except rather than dressing in 1860's clothing, a bunch of us, instead, wore our colonial clothing.
How cool is that? Dressing colonial on the 4th of July!
This was my 3rd outing wearing 1770's garb since purchasing it in the spring and I love it more each time. Not that the 1860's is losing favor. It's just that, for me, this is something new! Or old! Or...well, you know what I mean.
I suppose much of the reason is that I have always loved the patriotism that the colonial era represents which seems to be missing here in the 21st century by so many - real citizen patriotism. 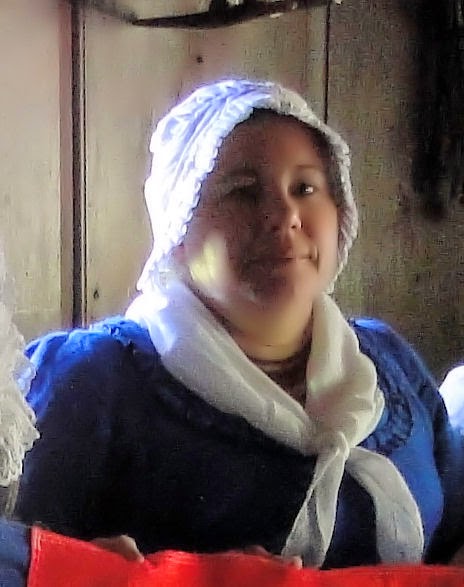 Oh, I know I'm looking at the colonist's world through rose-colored glasses - as living historians, we all pretty much tend to do this no matter what period in time we are representing. I mean, I'm not going to reenact the past and be miserable, for I have my own era in which to do that! But since I do not reenact in 1770's clothing very often, I want my time *there* to be more on the upbeat side of life.
What made this year's 4th of July celebration that much better for me was having eight other RevWar era reenactors come along.
And the icing on the cake? My wife, for her first time ever, donned colonial clothing and joined me in this excursion.
And she liked it.
She really liked it.

With Greenfield Village having an exact (and I do mean exact!) replica of the Pennsylvania State House (as it was called  in the 18th century - now better known as Independence Hall) as the entrance to the Henry Ford Museum, we thought we would, once again, take some historical photographs in front of it, just as we did on April 18.


From there we entered the Village proper. The weather was as perfect as I can remember having on an Independence Day. Normally it's too hot or, on rare occasions, raining. But we had sunny skies with temperatures in the mid-70's.
The best weather day ever!


We made our way to the colonial part of Greenfield Village where three authentic 18th century buildings have been relocated there from New England. It's also in this area where a 17th century English home, originally from the Cotswold part of England, now stands.
We stopped off here to admire the gardens that surround this stone cottage.

We did more than "stop and smell the roses" while visiting the Village on this Independence Day - - - - we also ate at the Eagle Tavern. Though built in 1832, it is not very far removed in its style from the late 18th century taverns, so we fit right in!


We continued onto the Giddings house to enjoy a more upper class colonial style of living.

This wonderful example of a New England colonial home was originally built around 1750 by John Giddings, a prosperous merchant and shipbuilder, who lived there with his wife, Mehetable, and their five children.

It's only during the Fall-Flavors Weekends and the Holiday Nights Christmas celebrations that a good portion of the first floor, including the rarely seen kitchen, is open to the public. Believe me when I say I take full photographic advantage when this occurs!


Now the 1750 Daggett House, from Andover, Connecticut, is a full-fledged living history historical farm home, with visitor access to a good majority of the first floor while period-dress presenters cook and do chores of the time. This is one of my very favorite structures in the Village.
At the time this dwelling was originally built, Andover was known as Coventry, and it was in this village that by 1750 - around the time he married his wife, Anna Bushnell - Samuel Daggett built the saltbox structure. Daggett was a housewright by trade and built this particular home on Shoddy Hill Road, atop 80 acres of land, half of which had been deeded to him by his father. Daggett also framed almost every other house in the surrounding area, as his account book attests.


Due to the ability to move about freely inside this home, it's Mr. Daggett's home that we chose to pose for historical scenes.
As a living historian, I remember the very first time I stepped inside a Victorian home while wearing my 1860's clothing - that magical feeling of "I belong" just swept over me, and it continues to do so. I don't know, maybe I'm just a tad touched, but, yes, that same feeling engulfed me here at Daggett dressed as I was. A feeling like no other. Almost spooky, but in a good way..


A few days before July 4th, I came up with the idea to bring along to the Village the Betsy Ross flag that I was given for Father's Day in an attempt to replicate and capture, in feeling, that time in the late spring and early summer of 1776 when, as the story has been told, Betsy Ross sewed the flag that we now recognize as the first American flag. (Click HERE for more information on historical American flags).
We had to do the poses quickly while there were no visitors around. I try to be as least disruptive as I can, for I do appreciate Greenfield Village tolerating me in my little historical excursions.
Luckily, we were able to take around a dozen pictures before visitors came.
The following are some of the best:


Though it was not a reenactment, our visit to Greenfield Village on the 4th of July was a lot of fun - just a bunch of us who have a passion for the past getting together in a historical place on a historical holiday. And I know we made a lot of visitors very happy, for many made kind comments to us about the way we were dressed, and there were many others who were from foreign countries and could barely speak English that were just so excited to see us and have their picture taken with us. One said to me (in very broken English), "You look like American history!" When another family (from India, I believe) posed with us I put my tricorn hat on a young boy who grinned ear to ear, as did his parents. They loved it! And that right there really made it all worthwhile for us. And we helped make their day as well, I'm sure.
By the way, I found it very interesting and very cool that so many from other countries were at the place where 300 years of American History is located: Greenfield Village.

As most of you know, I take my reenacting very seriously, but it would be difficult to do living history to any great extent at the Village considering we were only visitors on this day and that we weren't at a reenactment. Thus, we had no tents to display our period lives. But as I mentioned earlier in this posting, sometimes just walking into historic buildings wearing the clothing that was worn when the structure was originally built gives someone like me a feeling that can't be explained.  And to have others of your ilk with you, well, that is just the topping on the cake.
And the visitors loved us, too, especially here on the 4th of July!
In Civil War reenacting I do my best to bring the past to life as authentically and realistically as I can, and it's my hope that I can do the same for colonial. Of course that will take research on my part. And I do have many social history books of the era that can guide me. Plus I have met some very knowledgeable colonial reenactors that seem to be more than willing to share information.
I'm looking forward to doing more.
See you next time in time! Happy Independence Day!