As you may or may not know, I head up a group of period vocalists known as Simply Dickens. We specialize in old world Christmas music, including such well-known-for-their-time carols as "All You That Are Good Fellows," "The Gloucestershire Wassail," "The Boar's Head Carol," "Tomorrow Shall Be My Dancing Day," "The Wexford Carol," "Riu Riu Chiu," and other ancient tunes of the same genre. Being that we are pretty much the only group in these parts who specialize in this style of Christmas music, we get booked up pretty good in December. And since we are purveyors of historic holiday music, we, many times, perform in historical places, which lends plenty of opportunity for wonderful photographic moments.
What I have here are some of my favorite images taken within the last few years. I really like these photos because they give off a certain feeling...something a little bit different than typical vocal group promotional shots. The idea of taking this style of picture came to me when I first discovered that awesome British reenacting troupe The Ragged Victorians a few years back.
Then I thought of some of the early pre-Brian Epstein Beatles pictures of the very early 1960s.
Follow that with my attempts at historically accurate reenacting poses taken at the living history events I participate in, and voila! you get the mix I have in this week's post: a kind of blend of the three varieties which creates, what I believe, something pretty unique.
And we have fun.
Check them out - let me know what you think (in the comments section): 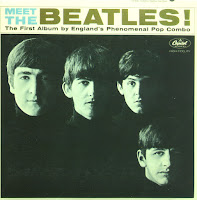 Get it? "Meet Simply Dickens"?
Kind of like Meet the Beatles. 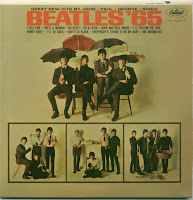 With each new Christmas season, I've been titling my Facebook Simply Dickens photo albums in much the same manner as the Beatles album titles: Meet Simply Dickens, Simply Dickens Second (photo) Album, Something New, and, for this year, Simply Dickens '15.
I should get us to pose with umbrellas, eh?


One of my very favorite of all the carols we do is an old number called "All You That Are Good Fellows," found in a book printed in 1642 London entitled "Good and True, Fresh and New Christmas Carols."
According to a music history book, English Song and Ballad Music, "The correct date of this fine old melody appears altogether uncertain, as it is found in different forms in different periods."
One thing is for certain...it's old. And therefore I must conclude that it accurately describes the way our English ancestors celebrated Christmas:

A few years back we had a whirlwind tour day: we performed in three different (and spread out) locations in a single 12 hour period, all the while the snow falling...pretty hard...throughout the day. We ended up with around 8 inches of the white stuff by nightfall, and the driving was pretty horrendous. But do you want to know what? It was, perhaps, my very favorite day of performing because of the snow. It just made it the picture-perfect-postcard Christmas Carol day for us wassailers:

From Millrace Village we headed over to Greenfield Village for their special Holiday Nights Christmas event.
The snow continued to fall...
Speaking of Jingle Bells, there is quite an interesting history to that carol:
"Jingle Bells” is one of the best-known and most commonly sung Christmas songs in the world. It was written by James Lord Pierpoint and published under the title "One Horse Open Sleigh" in the autumn of 1857, with the title being revised to "Jingle Bells" in 1859. Even though it is now associated with Christmas, this carol was actually originally written to be sung for our American Thanksgiving, back during the time when the harvest celebrations did not necessarily have one certain day and would sometimes not only take place in late November but even into December when snow covered the ground in many a northern state.
Many modern folks believe that jingling bells were put on the sleighs for a Christmas delight because of this ever-popular song. That is truly not the case: jingle bells were put on sleighs for safety reasons. The horse's clip-clopping usually heard along the roads during the other three seasons are muffled greatly by the snow-covered ground of wintertime, and the head gear folks wore also muffled the sound of the beasts and carriages, making the pedestrian nearly deaf. This could be a dangerous situation except for the high-pitched sounds of the jingle bells warning the pedestrian to move out of the way. Just as horns are required on the modern day motor vehicles, bells were once a must for winter travel on sleighs. "Keeping to the Right" upon hearing the jingling of a sleigh was the rule then as it is for automobiles today.

Lest you think of "Jingle Bells" as strictly a Christmas carol, this little bit of social history should give you a different perspective upon hearing this winter song.
By the way, the rhythm of the tune mimics that of a trotting horse's bells.

Since Simply Dickens is an inter-active group, one of the things we very much enjoy doing is gathering up the kids and handing out jingling bells we keep on hand for such occasions as performing this time-tested carol. Of course, everyone knows and loves this tune so we usually have a large crowd gathered around, singing along. Now, as purveyors of the old world carols, I let the audience know that we sing the original lyrics from the 1850s and not only are there four verses, but some of the words are slightly different. For instance, in the chorus we sing "Jingle Bells Jingle Bells jingle all the way, oh what joy it is to ride in a one horse open sleigh" instead of the more recent and more common "Oh what fun it is to ride..."
There is also a third verse from the original that is rarely, if ever, sung any more.
It goes like this:

A day or two ago,

The story I must tell
I went out on the snow
And on my back I fell.
A gent was riding by
In a one-horse open sleigh,
He laughed as there I sprawling lie,
But quickly drove away,

This verse always gets a laugh, for we have the ladies of the group sing it, and folks get a kick out of imagining seeing a hoop-skirted woman "sprawling in the snow" as a gent rides by, laughing.

Most people who reenact usually end their season once the cold weather hits. But there are a few of us who enjoy the chance of wearing 18th and 19th century clothing of all seasons, and to have the opportunity to wear period winter garments adds a new dimension. Though Simply Dickens members TC and Diana are not historical reenactors, the rest of us are, and being able to have outer clothing of the period gives us a chance to experience another part of the everyday lives of our ancestors.

My good friend (and fellow living historian), Dave, enjoys dressing up in his Civil War Union Santa suit, taken directly off of the Harper's Weekly cover from January 3, 1863 (which means the issue was for Christmas 1862). He took great pains to make sure the clothing was accurate to the sketch by Thomas Nast, and if you compare the two you can see what a fine job he did.
Well, Dave happened to be at our Plymouth show dressed festively, and before we ended our set I asked him to come up and give a little history lesson about why he was dressed in the manner he was.
Dave then went on to explain of Thomas Nast's earliest published picture of Santa Claus.  Nast is generally credited with creating our popular image of Santa. This illustration appeared in the January 3, 1863 edition of Harper's Weekly, and shows Santa Claus visiting a Civil War Camp.  In the background, a sign can be seen that reads "Welcome Santa Claus." The illustration shows Santa handing out gifts to Children and Soldiers.  One soldier receives a new pair of socks, which would no doubt be one of the most wonderful things a soldier of the time could receive. Santa is pictured sitting on his sleigh, which is being pulled by reindeer.  Santa is pictured with a long white beard, a furry hat, collar and belt.  We can see that many of our modern perceptions of Santa Claus are demonstrated in the 140 year old print.

Perhaps most interesting about this print is the special gift in Santa's hand.  Santa is holding a dancing puppet of none-other-than Jefferson Davis, President of the Confederate States of America.  The likeness to Jefferson Davis is unmistakable.  Even more interesting, Davis appears to have the string tied around his neck, so Santa appears to by Lynching Jefferson Davis! This is a classic Thomas Nast illustration.  This is Nast's first published picture of Santa Claus, and we can see many of our present images of Santa demonstrated in this Civil War illustration. (Click HERE for more Civil War/Harper's Weekly information)
We decided to have some fun with Dave and came up with the following pose of Victorians telling Santa what they'd like for Christmas:

Okay, everyone, now let's give the photographer a nice pose:

Lee Cagle, the unofficial/official photographer of Greenfield Village, asked us to pose for him while we were performing inside the pavilion on evening.
This is what he got:
Well, just like with the previous couple of pictures, we also played nice for Mr. Cagle as well: