The Revolutionary War: Muster at the Mill 2017

~ There was no actual Revolutionary War battle called 'Muster at the Mill.'
It is called that due to the generous offering of land by the owners of Uncle John's Mill, and you will read about this wonderful cider mill in the body of this post
Enjoy!

It's not very often that a reenacting event is an event in itself. But that is certainly what the 2017 Muster at the Mill reenactment felt like.
Everything just seemed to fall into place.
First, the weather was perfect Michigan fall weather: upper 60s and lots of sun. Second, let's look at the setting: it takes place at a rural cider mill in the middle of Michigan, and if you know anything about Michigan in the fall, you know that that is the time of year - September through early November - when residents flock to cider mills in droves virtually every weekend for cider and doughnuts. Going to cider mills has been a tradition that's taken place every autumn since settlers brought over apples trees from Europe back in the early 1600s, and it's a tradition still carried on here in the 21st century with throngs of visitors - thousands each weekend. Oh, maybe not in the same manner as done all those years ago, but, well, the act in itself is pretty darn close!
So what better time and place to have a historical reenactment than at a cider mill? Particularly, Uncle John's Mill, located in rural St. John's, Michigan. The owners and workers here really went all out for us, as they do for their visitors, and made us feel very welcome. Of course, they sell apples, apple cider pressed right there, and have a small country store filled with neat little crafty gifts and lots of apple-oriented desserts.
And their orchards seem to go on forever!
For the last two years, Uncle John's has given its visitors a little something extra: an early American history lesson by allowing living historians to set up camp on the grounds there.
I so enjoyed speaking to the public - those who came down the hill from the mill to see our reenactment - about the good old colony days, about Paul Revere, and about reenacting, for most I had spoken to had never been to a bonafide reenactment before.  And many knew little about our nation's early history.
Of course, my stealth camera was with me and I took plenty of photographs to document the event. I have also included a few pictures taken by others, with their permission.
As always, to see the images larger, please click the photos.

Sarah Franklin was born to Benjamin and Deborah Franklin in Philadelphia on the eleventh day of September, 1744. Sarah, known as Sally throughout her life, had a typical education for a girl of her status in 18th century Philadelphia. She had a great love of reading and music and was considered a skilled harpsichordist.
Sally lead an active public life according to the standards of womanhood in the 18th century. As the daughter of Benjamin Franklin, she had an unusual access for a woman to the political life during revolutionary times. Although her primary role was caretaker of her family and home, she played an active role in the Revolution through her relief work and as her father's political hostess.
Sally is best known for her involvement in the Ladies Associated of Philadelphia. She took over leadership of the association in 1780 and supervised the sewing of 2200 shirts for the American soldiers.
In 1807, Sally was diagnosed with cancer and sought out medical care during the winter of 1808-09. Her disease was terminal and she died at the age of 64 on October 5, 1808. Her remains, along with her husband's (Richard Bache), are buried in the Christ Church Burial Ground in Philadelphia, beside those of her parents.


The adults also had some fun.
Contrary to popular belief, Native Americans and Mountain men rarely threw their tomahawks (or "hawks") during battle. A tomahawk was one of their best hand-to-hand weapons, good for both offensive and defensive moves. Throwing a tomahawk to kill an enemy put considerable distance between the thrower and his very best weapon. Even if a mountain man or an Indian warrior killed his intended target, he was pretty much defenseless while he scurried to retrieve his hawk from his victim's body.
Instead of throwing their tomahawks in the heat of battle, mountain men and Indians hurled their hawks mainly for fun. A few times a year, mountain men would come into town to gather supplies and trade pelts they had collected during the previous hunting season. They'd often set up a huge camp outside of town and take part in various contests such as tomahawk throwing. Some Native American tribes held similar contests of skill for their men to take part in. Indians would also come to the frontiersmen camps to engage in trading and throw some tomahawks with the men there.


Unfortunately, though they were invited, there was only one person representing the Native American at Muster at the Mill. And I did not see him try tossing a tomahawk.

And the battle begins:

After the battle had ended:


One of the more interesting aspects of any war, much less a war from 240 years ago, is the medical treatment the wounded men received. Woe to the soldier who required surgery after being wounded on the battlefield. The conditions in field hospitals were deplorable.
If a soldier was shot with a musket ball, which had a diameter of about three-fourths of an inch, the damage was devastating, and he would most certainly require a visit to the surgeon. Since there was no anesthesia at the time, the soldier was strapped to the table to keep him restrained while the musket ball was dug from his body using tools that probably had not been washed after being used to treat the last soldier.

Patients were strapped down and given something to bite down on, like a piece of wood or some leather, to keep them from biting off their own tongues as they endured the agony.

Epilogue:
As you can probably tell from all the pictures, this second year of Muster at the Mill was a grand success - much grander than, I believe, anyone expected.
And the interest in this moment in American History from the customers from Uncle John's Mill was at such a high level...I honestly believe that the local open-air museums are missing out by not including the Revolutionary War period in their annual schedule of events.
Thank you, Scott Mann, for putting this wonderful event together.
By the way, I have been asked why I use so many pictures in my postings.
To be honest, it's mainly because I consider my posts of this sort to be kind of a memory book - a diary in a way, where I can refer back to every-so-often and relive certain events.
It's also my own sneaky way to hopefully get my readers excited about our American history in a positive manner.

And now for something a wee bit different:
So Christy mentioned getting all of those who wear Kilts for the King to pose for a sort of "Captain Morgan" photo.
And they did - -


By the way, there were two battles held each day of the event, and, though not captioned, here are four photos from the first one of the day.
There was no historical battle called Muster at the Mill - that was just the name of our reenactment. 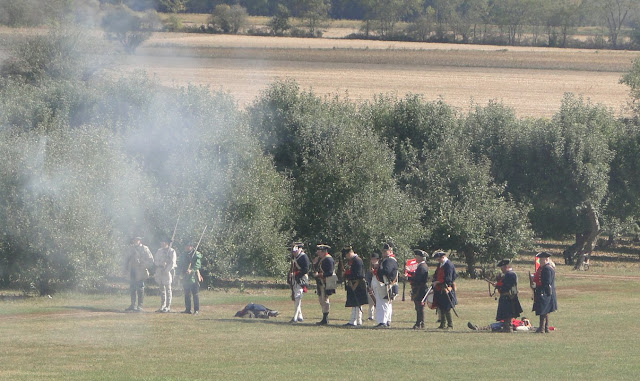 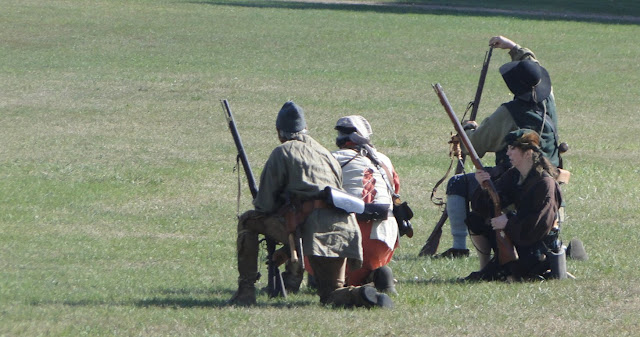 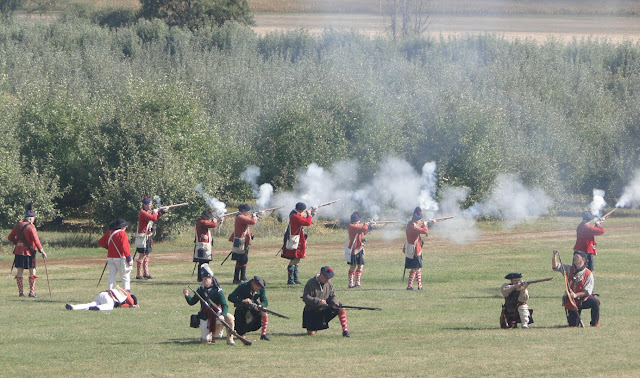 I was the lone Native American, and I had a VERY good time at the 'Muster. I was NOT given invitation to participate in the hawk throw. I really enjoy throwing hawk, so it would have been fun. I am undecided about attending again, as there is another event on the same weekend that I have been to for several years (they moved the weekend, so now they conflict) There were truly a lot of people at the Muster, but many of them did not come down the hill where I was directed to set up. If I return, I will try to see if I can set up on the hill with all of the other set, in order to be able to have more visiters.