There is a lot to be said about local history: yours, mine, or anyone's. Take my hometown of Eastpointe. I've lived in this city for fifty years, aside from a few that found me in nearby Warren at the time of my marriage, and even though it's a great city to drive through to get somewhere else, it's still my hometown; it is the place where I have, for the most part, lived since Lyndon Johnson was still president, the Beatles were still a group, and man had yet to set foot on the moon.
That's kind of a long time, wouldn't you say?
And Eastpointe is in the County of Macomb.
Nothing too special there either. Except that this year of 2018 marks the 200th anniversary of Macomb County becoming a county.
Now that's kind of cool! 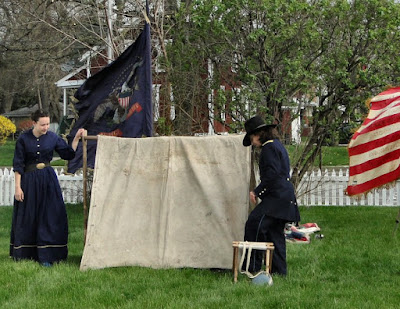 And all the various local historical societies are celebrating this event. The historical imagination runs wild: in the year it became a county (1818), John Adams and Thomas Jefferson were still alive, James Madison was president, and the United States Congress adopted the American flag as having thirteen red and white stripes, and one star for each state (twenty at the time) with additional stars to be added as new states entered the union.
Even cooler, eh?
Named in honor of General Alexander Macomb, a highly decorated veteran of the War of 1812, Macomb County was the third county in the Michigan territory.
Here are a few historical bullet points about this county in which I've lived most of my life:

~ The first Europeans arrived in the area during the 17th century. They included French fur trappers (our Voyageur friends) who recognized the richness of the marshes and sought new opportunities for trade.
~ Moravian missionaries established the first organized, non-native settlement in the county in 1782 as a refuge for Christianized Indians driven out of Ohio.
~ In the late 1790s, Christian Clemens visited the area, and in March of 1800, purchased a distillery considered the first building on the site of the future Mount Clemens. The next year he purchased 500 acres for development. This site, known as High Banks, was platted as the Village of Mount Clemens in 1818, when it was proclaimed the Macomb County Seat.
~ In the early 1800s, and at least by 1840, settlers moved into the interior of the county, carving out farms from the hardwood forests. The roots of the county villages and townships were established by this time. In addition to the original French and English, later settlers included Germans, Belgians and others who came directly from Europe.
~ And in the 1870s, mineral baths brought international fame to Mount Clemens. Many believed the waters had healing powers. Although the stream still runs beneath the city, interest in the spas died out in the early 20th century. Recently, there has been a reemergence of interest in the mineral baths now being offered at St. Joseph Hospital in Mount Clemens.

So the East Detroit Historical Society asked the members of the 21st Michigan Civil War reenacting unit if we might be willing to help them celebrate by presenting living history at the old 1872 school house, knowing that we have the means to show everyday life of the mid-19th century inhabitants of this county of Macomb.
Why, of course we would!
Won't you join us?

Imagine stopping at the red light on the busy street (9 Mile Rd) directly in front of the school house and seeing this scene...

To date, about 800 Civil War soldiers who were from Macomb County have been identified - not bad for a very rural county of the 1860s (click HERE for more info).
The plan I put in use for our celebration of the history here was to have our Civil War military outside of the building, and the 'home arts' set up inside.

We also had a young lady who played a role in the military join us - Miss Annie Etheridge.

Yes, I am very proud of our civilians and how everyday life is presented in varying ways, including a woman who was assigned as the primary lighthouse keeper when her husband left for military service.
Anastasia “Eliza” Truckey served as lighthouse keeper of the Marquette Harbor Lighthouse in Marquette, Michigan, while her husband was away for war. Nelson Truckey left Eliza and their four children for three years to fight with the 27th Michigan Infantry during the Civil War. During that time, Eliza kept the light burning without an assistant to help her.
Laura Smith Haviland was a pioneer social activist who devoted her life to others. In 1837 she co-founded, with her husband Charles, the Raisin Institute, which was one of the first schools in the United States to admit black students. Laura Haviland was very involved in an anti-slavery movement, serving as Superintendent and Stationmaster on the Underground Railroad in Michigan.
After the Civil War, she became an officer in the Freedman’s Aid Society, assisting in the relocation and adjustment of former slaves in Kansas.
Mrs. Haviland also worked for the temperance movement.

Home arts was represented as well...

For a variety of reasons, we didn't get nearly as many visitors as we would have liked to, but all of us living historians who participated certainly enjoyed our time together after the long, cold winter separation, for we are all good friends whether we dress in period or modern clothing.
It was a fine start to what promises to be a wonderful reenacting season.

Posted by Historical Ken at 6:29 PM