So, at your reenactments, are you a camper or part of the 'motel militia'?
For me, I sometimes camp, but usually I either head home when bedtime comes (if the event is close enough) or I will hit the nearest motel. When I do sleep in my tent it's usually at the three day Greenfield Village Civil War event, where - sleep be damned! - I can awaken amongst the historic buildings of American history. 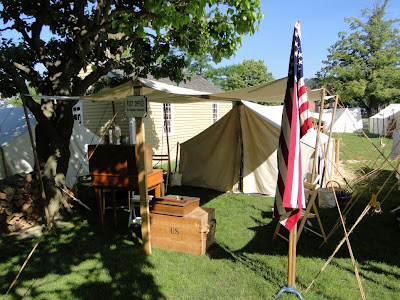 Our camp site (aka the Reenactor Post Office)
To be honest, however, the whole camping thing is really not for me. I prefer being indoors on a bed rather than a cot or sleeping bag. And, it's nice to have solid protection during inclement weather.
Okay...I'll admit it here: I prefer being part of the motel militia. I am noticing a large (and getting larger) group of reenactors and living historians who are prefering sleeping in comfortable surroundings rather than in a tent.
1. "But, you're not really reenacting if you 'don't do it all!'"
So, I can't portray a real living historian if I don't sleep all night in a tent? Since when? As I said, I do spend the night in my tent a few times a year, but I don't sleep well at all when I do. If I sleep in comfort, get a decent nights sleep, and awaken refreshed I give a much better presentation than if I am only getting only three or so (more or less) hours of sleep.
I have seen 'real reenactors' spend more time with their tenting and camping than on their presentations, many times ignoring the public in the meantime (if they have a presentation at all - many feel the camping experience is their presentation - this I do not understand!).
2. "You're not experiencing true 19th century living if you don't sleep in a tent!"
And, pray tell, when did northern civilians on the homefront (or even most southerners) sleep in tents during the Civil War? I represent a middle class postmaster of the 1860's. I am able to provide for my wife and children a good life, no fear of want, and even have hired a domestic for cooking and laundry. Do you think we would be sleeping in a tent? One would think that if I were traveling far from home in the 1860's I would, except under rare occurrences, sleep in an inn or a tavern, right? 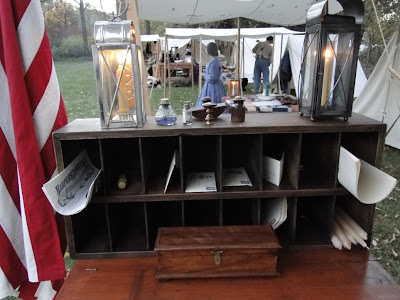 Part of my post office set up
Let's expand on this a bit more...understand, please, that I do set up a wall tent at the events where the opportunity to reenact in a period home is not available; I need a place for my 'post office,' as well as a spot to be our home base. Also, we must be able to hide the farb, right?
It's this situation that I ask the modern visitor, when the availability of using an actual period home is nil, to use their imagination and to think of our tent as sort of a wood frame house. Most seem to understand.
As I have written in previous postings, I have been able to perform living history presentations inside actual period homes and structures at numerous events, and these have been perhaps the best of all of my reenacting experiences. To be in an actual mid-19th century home while wearing period clothing and remaining in a 1st person mode clearly is as close to time travel as one can get - for the living historian as well as for the modern visitor.
Tell me that's not experiencing true 19th century living...! 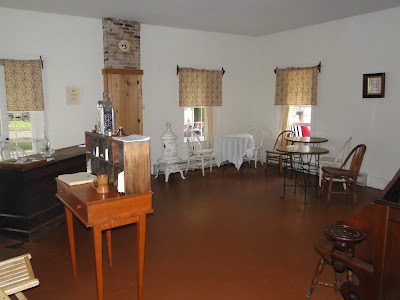 My post office set up at the Mason Tavern in Crossroads Village
If a visitor asks me whether I spent the night in my tent, I will answer truthfully: sometimes yes, but other times I tell them that I am staying at the local inn (they don't have to know that the local "inn" is the 'Comfort Inn'!). And, this can actually lead to a very authentic conversation about traveling by coach.
The following comes from an older posting I wrote about the Eagle Tavern:
"There is a story told of a stage that left Clinton's Eagle Tavern for the west one morning loaded with passengers. The road was very muddy and the coach had managed to get a mile from the village. The passengers walked back to the inn to spend the night, and early the next morning returned to the coach. During the second day it got three miles from Clinton. Again, the passengers returned to the Eagle Tavern. On the third day the coach must have reached another tavern, for the passengers did not return." 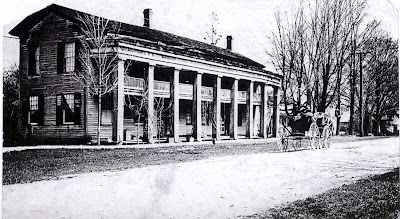 The Eagle Tavern - an original picture from the 19th century
The above is a true documented story of mid-19th century travel, and I have used this tale as my own when speaking to the public about my travels to the location at hand.
Bringing the past to life. All while being part of the motel militia.
So, whether you prefer tenting tonight on the old camp ground or motel militia, the opportunity to present 19th century history is there either way.

I am right with you and I really love the 'I stayed at the Inn' part. I am right there too!