I've had a couple of nice comments made to me about my new header photograph I am using now in this Passion for the Past blog. Yes, that's me in the picture - - - it was taken in January 2013 to be used specifically in a posting I was re-writing and expanding on about life in wintertime in the 19th century.
I actually set up a sort of photo shoot for that post; my wife Patty and our daughter were both very willing to get dressed up in their period clothing for the shoot. I took around 30 pictures of them posing in numerous ways, including one of my daughter reading by oil lamp and candle light, and another of my wife and daughter sitting in front of the warmth of a fireplace on a cold winter's night, and I used the different settings on my camera in my attempt to get the most accurate look and feel of a mid-19th century evening. 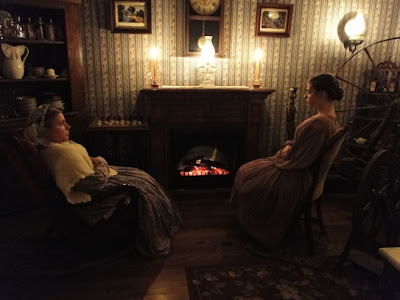 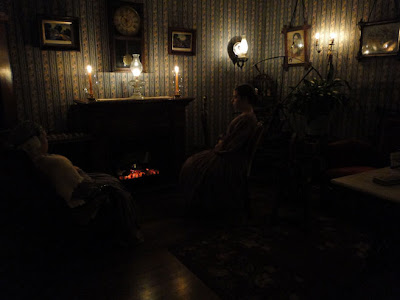 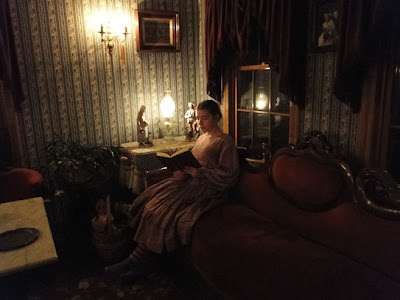 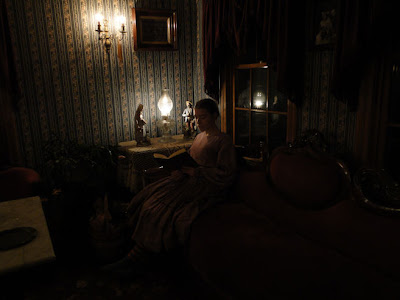 Patty then reciprocated and took around 25 photos of me at my desk, again changing the settings to get different feels and lighting. Thank God for digital cameras, right? 'course, I'm only showing a very few of what was taken. 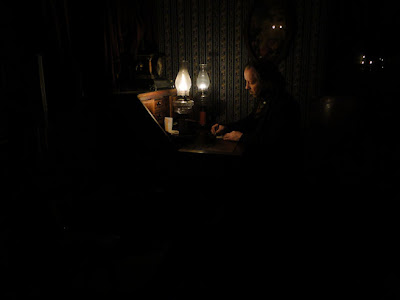 I must say I was very pleased with the outcome. I believe these photographs captured the essence of not only a winter's eve in the 1860's, but, in some instances, any evening of the mid-19th century, no matter what the season.
My decision to use this particular picture as my header photo was to show how I write my blog post. It's true! Yes, I know that I *actually* type out my postings on a keyboard attached to my computer while staring at a brightly lit monitor.
But forget all that!
When you read my blog, just think of me sitting at my 1860 desk while my two oil lamps, both from around 1880, are providing the light I need to complete my weekly posting - using pen & ink of course.
That's sort of the purpose for this blog - to hopefully take the reader 'away,' if only for a short while, to another time and place where the past may come alive once again, maybe through some of the social history postings or possibly through the reenactments posts.
And I believe this photo encompasses that.

This is the sort of feel I try to get with many of the photos I take. Some just happen naturally while others I might have to have posed.
Then again, there is one actual period photo that took a little bit of 21st century trickery to make work; the photograph below of the Firestone Family standing on the porch of their home was taken in the 1870's. 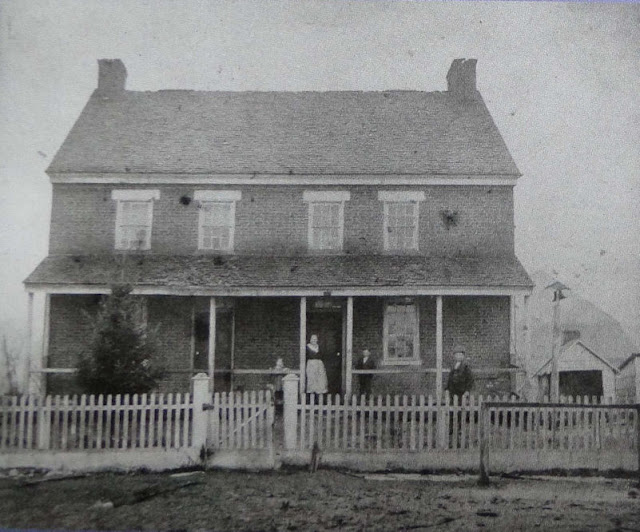 The house shown here has been moved from its original Columbiana, Ohio location (where this picture was taken) to Greenfield Village in Dearborn, Michigan.

On the 4th of July of 2012 a few of us visited the Village while dressed in period clothing (click HERE to read of our adventures on that day) and we had our picture taken on the porch as well - the very same porch from the 1870's photo. 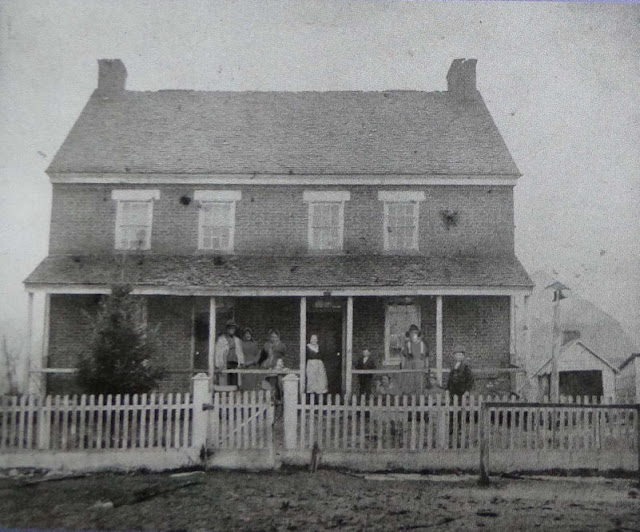 It took me a bit of time to match up the gray scale, size, and blurriness, but I think I made what could be a pretty convincing "time-travel" image, don't you think?


I have to admit that it is almost a sort of ethereal feeling...or maybe tenuous is the word I'm looking for... to be on the very same porch as the folks in the original picture.And when I added us to that photo and saw how real it actually looked...whew!...very strange feeling indeed!

Taking pictures, especially at museums or historical events, is something I love to do, especially when I can pose the subject to give it a realistic look and feel. As the Civilian Coordinator of the reenacting unit I belong to, the 21st Michigan, I hold period dress meetings in the spring and sometimes in the fall, and I try to do something a little different every year. This year what I hope to do is to have our members search through the numerous books I own on period photographs and find a photo from the past that they can try to replicate.
The follwing books are what they'll have to choose from:
Dressed For the Photographer and My Likeness Taken, both by Joan Severa,
Origins of American Photography by Keith Davis,
The Way They were Dressed Vol 1 and The Way They were Dressed Vol 2, both by Donna Abraham
More Dating Old Photographs by Halvor Moorshead
Who Wore What? by Juanita Leisch
and
American Victorian Costume in Early Photographs by Priscilla Harris Dalrymple

I think it should be fun. At least I hope it will be.
Either way, if it works I will post them here shortly after.

You know, I'm not a sports person. I don't go to the games and rarely watch them on TV. Well, sometimes I'll watch the hockey play offs or the baseball world series, but that's the extent of my exposure. As far as going to a sports bar - or any bar for that matter - never.

History and living history is my thing
Oh - - - and music...
Have a great day!

Hi Ken, I had been admiring your blog header as well so I'm glad you filled us in on it. The photos definitely look like a mid winter's eve in the 19th century. Thanks for sharing. Gina

Nice photoshoppin' — I have a lot of fun with it meself. And thanks again for a great blog.