American Graffiti has always been in my top 10 favorite movies of all time. I saw it when it first hit the theaters way back in, I believe, 1973. In fact, I saw it three or four times at the show that year. Of course, this was in the era of no home video - and certainly no DVD/BlueRay - once it left the theaters, so I had to wait for it to be shown on television, all cut up and filled with commercials (though I did have the soundtrack album as well as the scripted book that I read repeatedly).
Once video cassette recorders became the rage, the movie came out on VHS, and I naturally purchased it...at an exorbitant price (again, at an age before they realized there was money to be made by folks willing to buy movies for home use), but I just had to have it, so I paid whatever they asked.
And now American Graffiti is on DVD and Blue/Ray, all cleaned up and sounding amazing in its digitized format.
Looking back on my love for that movie from today, I find it crazy to think that the story took place only 11 years previous - "where were you in '62"?
I mean, really? Had times really changed that much from 1962 to 1973 that a short 11 year span could be considered nostalgic?
But if you look at what occurred in those 11 years - Kennedy's death, The Beatles and changes in music in general (Duke of Earl to Good Vibrations to A Day in the Life to Dazed and Confused to Low Spark of High-Heeled Boys), Vietnam, protests (civil rights & anti-war), the death of Martin Luther King jr, drugs & the counter-culture (think hippies and Woodstock), fashions (long hair for men, mini-skirts for women), man on the moon - I suppose the differences from '62 to '73 was pretty drastic.
Nowadays, ten years is a blink of an eye, isn't it?
But nostalgia still reigns.
Another lifetime ago, Chuck Berry wrote (and sang) "Ridin' along in my automobile........my baby beside me at the wheel...." a teen anthem of the time.
But cruising, that great national past time once belonging to the youth of America, now belongs to middle-aged men (and women) who have the money and passion to relive their past, and they do so by searching out and painstakingly restoring either a car they fondly remember as a teenager or maybe a dream car they had always wanted to own but never could.
So, instead of traveling back in time to an era from before my birth (as I usually do), I, instead, spent Father's Day weekend closer to my own personal "nostalgia zone" of my own time - the 1950s, 60s, and 70s - and enjoyed our local Gratiot Cruise as well as the Motor Muster at Greenfield Village.


Gratiot (pronounced grah-shit - - it's French) Avenue has a long history of cruisin' here on the east side where I live. Beginning at 8 Mile Road and heading north through around 14 or 15 Mile Road, the strip would be crawling with cars. And I do mean crawling, for, at one point there were so many cruisers that it was stop and go through most of the ride. I know this for fact, because there were plenty of steamy Saturday nights where I was part of this jam up, radio cranking out the Led Zeppelin or Aerosmith (obviously, I was a teen in the 1970s).
But most of us didn't drive the souped up rides that we see at most cruises these days: 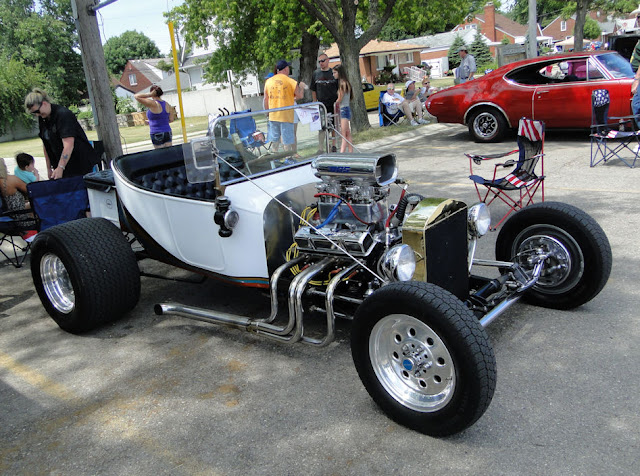 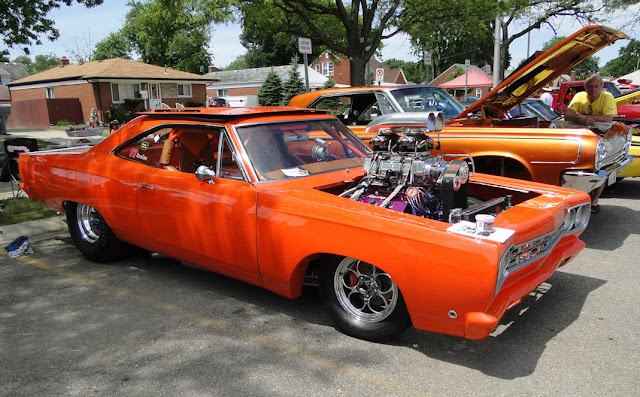 But instead we usually drove our father's car. My dad had a '74 Torino. Brown. A.M. radio only (CKLW-the big 8). Most others had at least an F.M. radio. If they were really cool they might have had an 8-track or a cassette player.
Now, if someone had their own car, it was more than likely an old she-bang with plenty of bondo holding it together.

Actually, to see a car like this on Gratiot in the 1970s would have been the ultimate cool, no matter what the condition.  But we never saw anything like this while cruising in the 70s.
Nor did we see anything like these rides...

However, in the mid-70s, I did see a few of these awesome cars out on Gratiot:

And we saw plenty of 60s Mustangs out on Gratiot as well.

For me, as a living historian, I find that cruisin' and car culture are more than just looking at the cool rides moving up and down the avenue. It can *almost* become a reenactment, if done correctly.
I suppose anyone can sit in a parking lot, hood open on their classic auto, and speak about the restoration process or what's in the motor to anyone who happens by.
But to beef it up a bit and maybe add a little bit of cultural history to their display, well, now you have a draw that goes beyond the car itself.
Now you're telling a story...giving a social history lesson...
...such as the following photos show - - -
The following few photos reminds me of vacationing with my parents back in the day. I remember stopping off at a park somewhere along our ride up to Mackinac Island and it looking very similar to what you see here: 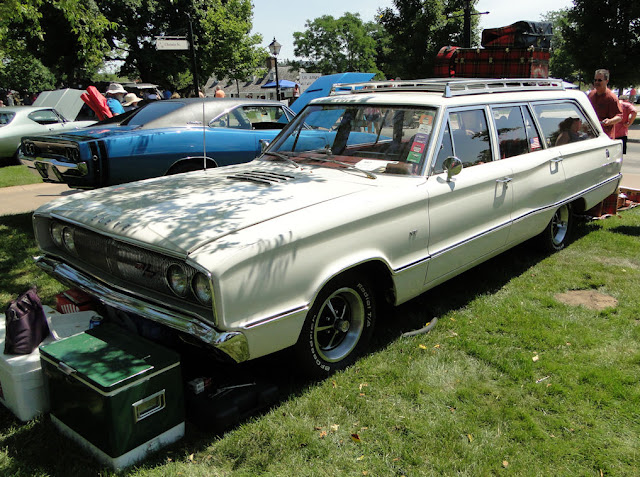 As a kid, I thought station wagons were the greatest car. As an adult, they went out of favor and mini-vans took over.
Mini-vans aren't so cool. At least to me they aren't.
Sitting neath the shade of a nearby tree worked great while having a travel picnic. Unless there wasn't a tree nearby, then nestled next to the car itself worked almost as good.
Oh! And don't forget the Kodak Duaflex twin lens camera, where the "view finder," located on top of the camera, flipped whatever the lens saw upside down. Yep - we had one of those!
To add to the total atmosphere, dressing in clothing to suit the era presented can go far in giving the visitor a sort of time-travel experience. For instance, here is a couple at an old car festival who really have taken that major step to bring the era of the 'horseless carriage' to life:
You see, bringing the past to life can be so much more fun than just sitting on your chair watching people move along. I believe dressing the part will also attract more visitors to your historic car.
Sort of like what we do in the historic reenacting world.

One of the Motor City Belles happens to be a good friend of mine:

At the Motor Muster held at Greenfield Village every Father's Day weekend, they have taken the extra step to help folks understand that car culture is more than just sitting with your hood open. They have a 'pass & review' where a large grandstand is set up, and it's here that one can hear about the many different styles of cars - not only stock, but hot rods, too:


One of the things I have said to people over the years is that music - especially rock and roll music - burgers, and cars historically go together. What would American Graffiti be like without the awesome music to go with it? One of the best scenes in the movie (if there is a best scene - they're all great!) was during the freshman hop, watching the teens dance as Herbie & the Heartbeats (Flash Cadillac & the Continental Kids) played "At The Hop."
Well, the good folks at Greenfield Village have a record hop on the Saturday evening of Motor Muster. They used to have a 1940s USO radio show, which was very cool, for there was an actual live Big Band playing the swing hits of the day.
But that ended three years ago when they decided to change it up a bit to a teen record hop. As much as I love Big Band and Swing music, I'm really enjoying the record hop!
They began this change by playing the hits of 1963. Last year it was 1964. This year? You guessed it - 1965!
Even some of the patrons will dress up in the style of the day. In fact, last year, my daughter did a bang-up job replicating the look of Mary Weiss, lead singer of the great girl group, the Shangri-Las:

The Greenfield Village dancers did a fine job replicating the past, dancing to the latest hit tunes on the WKNR (Keener 13) Music Guide, including...


But some my favorite pictures that I took (besides the Jillian porch photos) was of these two young ladies from very different eras in time. The colonial girl on the left is a presenter at the 1760 Daggett Farm House just getting off work, and the young lady on the right was portraying a Rosie the Riveter from the 1940s.


Remember when I wrote above about how car shows and culture are much more than *just* cars?
Well, here you go - - -
Now that's car culture.
That's rock and roll.
That's cruisin'!

And finally, I also enjoyed seeing the historic bicycles displayed by folks who restore them, including these two owned by my friend (and Civil War reenactor) Jacob:


Now, this Good Humor sold-on-a-bike was before my time. It is from 1948.
The earliest Good Humor that I remember, from the late 1960s, was on a motorized truck that had jingling bells signalling "the ice cream man" was on our street. 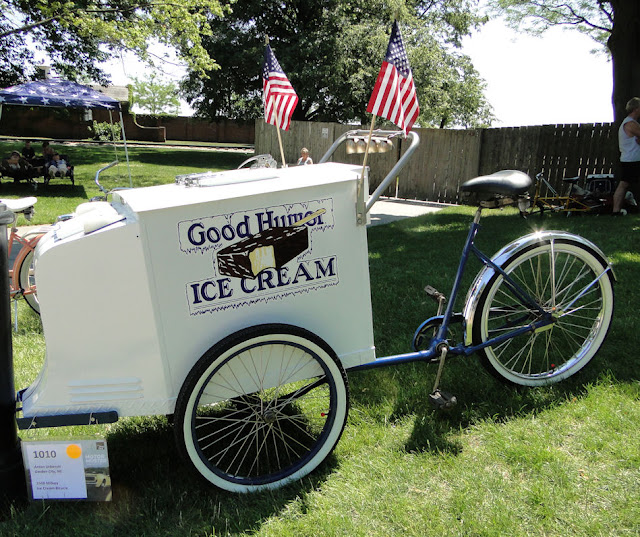 We'll end this week's posting with a picture of this balding guy who still keeps what hair he has left long standing next to his lovely wife.

Yeah...it's not often 'modern Ken' is seen in Passion for the Past.
But I do exist...see?