I have been celebrating Independence Day by visiting historic Greenfield Village now for seven years straight. And, per my usual routine, I enhance my patriotic experience by wearing appropriate period attire, and oftentimes a few living historian friends - sometimes more than a few - will join me in this time-travel adventure.
This year was no different.
In fact, the five of us that attended were like a hundred year time-line...well...90 years, from 1776 to the 1860s: three of us were from the Revolutionary War period (yes, I had my 1770s clothing on), and two in our party were of the Civil War era.
I don't know...there is something special about visiting a historic place while dressed in clothing of another era, especially on such a great American holiday as Independence Day. The spirit (or should I say "spirits") of the past just seems to engulf you. At least it does me, especially considering the fact that only a few days earlier I returned from Colonial Williamsburg: The Revolutionary City!
Talk about American historical immsersion!
So...needless to say, I had camera in hand - or in someone else's hand if I'm in the shot - to document our partaking in the 240th birthday celebration of the uniting of our colonies, and many of the best pictures are here in this blog post.
Hope you like 'em!

I happened to find myself in the 1770s - - - -1776, to be exact!
We spent the first part of our visit in the colonial section of the Village where the majority of homes were built in the pre-19th century.

'twas no accident! She heard we were in the 1770s and wanted to visit with us!
Great seeing you Beth!


The Giddings Home:
You all already know I love dressing up and replicating the past. But it's on Independence Day that I especially enjoy wearing my 1770s clothing. Unfortunately, Greenfield Village does little to celebrate the signing of the Declaration of Independence. Yes, I know about the Detroit Symphony Orchestra performance in the evenings along with the fireworks, but that is a separate event from visiting the Village - and one has to pay extra to go to it. Plus, a Star Trek Medley, as good as it may be, is hardly patriotic.
And, yes, it's also true they do have the Daggett House from 1750 active with daily colonial activities, which is wonderful.
But I cannot, for the life of me, figure out why they don't do a little extra special 4th of July colonial celebration during the regular daytime hours. I mean, they have an 18th century house collection in one area; a perfect solution would be to open up the 1750s Giddings House for the day - July 4th - and have historically-dressed presenters doing something period-patriotic while dressed in the finer "city" clothing of the period, and maybe speaking a little on that special year of 1776, including what occurred on the homefront during those tumultuous times of the Revolutionary War and of the uncertainty of "independence." I mean, after all, we are at the cusp of the 250th anniversary of the 13 colonies becoming the 13 United States, for goodness sake; the imposition and repealing of the Stamp Act happened 250 years ago, and we are inching up to the sestercentennial of the Townsend Acts, the Bloody Massacre in Boston, the Boston Tea Party, the 'shot heard 'round the world,' and, of course, to the Revolutionary War itself, which includes the writing and signing of the Declaration of Independence. I would hate to think the powers-that-be of Greenfield Village would let such an opportunity slide through their fingertips, especially considering how wildly popular the Bicentennial was 40 years ago.
It also helps that TV shows such as HBO's John Adams, AMC's Turn, and Bill O'Reilly's Legends & Lies: The Patriots, are very popular, as is the Hamilton play.
Celebrating Anmerica's birth is back in vogue!
By the way, kudos to those in the homes of Ford and Firestone who show some excellent Independence Day patriotism for the visiting public.
~(For those who think I am attacking Greenfield Village, please re-read what I wrote. I am questioning and suggesting, not attacking)~

I actually garnered a small group of interested spectators - - totally off the cuff - - when a young family questioned my appearance:
The parents were very pleased with our little interaction and commented on how they would like to see more of this sort of history presented.
It was an honor.
I loved the fact that my two colonial lady friends were standing with me to help to give an overall feel to my little presentation.
~(Many, many thanks to Kevin Amos, of B&K Photography, for having the intuition to capture this spur-of-the-moment historical happening)~

Meanwhile, inside the Giddings Home...


As we moved up the road, Kevin found the perfect house for himself...and his girl:
It was not long before we found ourselves at the Eagle Tavern, built around 1831.
Even though this tavern was built 60 years or so after the Revolutionary War period, the style is very reminiscent of the era of our Founding Fathers and Mothers:


After our fine meal at the tavern, we found ourselves travelling further into the future.
Here, in the yard of the home of Henry Ford's birthplace - built around 1860 - we find an Independence Day celebration in the year 1876 - the centennial of the birth of our nation.
The two wonderful presenters were having an outdoor picnic (mmmm...chicken...) to celebrate and had decorated the tree with red, white, and blue ribbons.
I thought it fun to capture an image of those of us who were there to witness the 1st celebration of our Independence and of our descendants of one hundred years hence.

And, just outside the front gate of the home (where we can see the patriotic-looking flowers)...

But we still weren't done with our journey into the past.
We had one more stop to make - - the Firestone Farm from 1883:

Now for the Village ride!
I'm not going to lie - - this is something I would love to be able to do. Alas, that will never happen, but I do enjoy watching my presenter friends enjoy this fun adventure - - !

So, there you have it - our day spent in the past celebrating the 4th of July at Greenfield Village. I would like to thank my friends Beth & Kevin, Meg, and Rae for joining me this year. We had such fun together!
And to all of my presenter friends who work at Greenfield Village, thank you for putting up with us (and once in a while, our shenanigans!), for you know we do this with the strong spirit and best intentions to help spread our passion for the past.
And to anyone who has a historic village near where you live, whether large or small, please take the opportunity to support it by visiting it and visiting often. Volunteer your time to help out. Donate whatever funds you can spare. And this goes for the larger, more well-known open-air museums as well, for they have had their funding cut and need our help.


By the way, thank you Beth & Kevin for allowing me usage of a few of your photos (bottom left corner has their watermark to show which photos belong to them).
And to you, Loretta, for the picture I stole from Facebook!

Here is a listing of postings that might be of interest to those who enjoyed this post:
The Glorious Fourth
Celebrating Independence Day in a Colonial Way
In the Good Old Colony Days
With Liberty & Justice for All
Paul Revere

And finally....I'm back to the future - - now it's time for my clothesline to look colonial while my 1770s attire airs out. 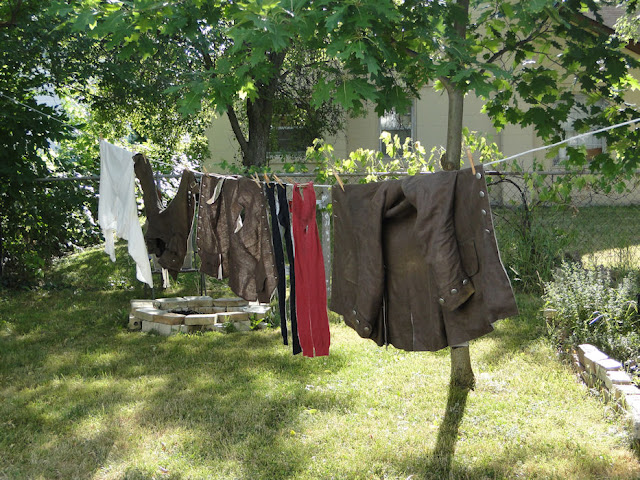 By the way, I like what Mike Rowe (from "Dirty Jobs") said about this most favored holiday (I am paraphrasing here):
We say Happy Thanksgiving - not Happy November 26 (or whatever day it falls on).
We say Merry Christmas - not Merry December 25.
So, let's say Happy Independence Day rather than Happy 4th of July.
I know I will.