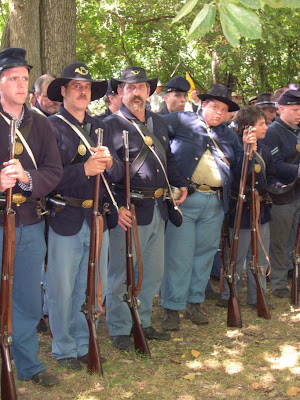 If you are a Civil War reenactor living in Michigan or in the surrounding states, then you know about the Jackson Civil War muster. It takes place every year on the weekend before Labor Day Weekend on a massive plot of land known as Cascades Park.
Cascades is divided into numerous sections: at the far end are the Civil War era civilian camps, where the living historians show life on the homefront - hoop skirts and sack coats rule the day. 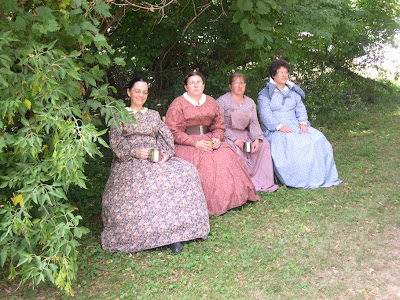 Bordering two sides of the civilian camp is the military camps (both North and South). This is where one can see the camp life of a soldier.
A wall of trees separates the camps from the "battlefield." Of course, it's not a real battlefield, but a makeshift one, made up to look like whatever battle they have that particular year. Most of the major battles of the Civil War have been portrayed here over the past 24 years, and a number of smaller, lesser known battles - such as this year's Wilson's Creek - are also portrayed. They do a wonderful job giving the ground where the soldier's fight a make-over so it gives a pretty good impression of what the actual battlefield may have looked like. This year, a real cornfield was placed on the grounds to give it that 'look' of where the battle was fought back in 1861 Missouri.
Infantry, cavalry, artillery - all battling at once. It's an awesome sight.
Near this field is a 'Special Impressions' area, where one can meet the dignitaries of the day: President Lincoln, Senator Howard, Stephen Douglas, etc.
This is also where one can learn about medical practices of the time, see old-time photography, visit a saloon, and watch a period ball, among other things.
A large parking lot separates the "past" from the present: the modern "carnival" aspect of the Jackson event is just on the other side of this parking lot. Not well liked by many of the reenactors, vendors are lined up to sell corn dogs, cotton candy, rootbeer floats and the like. Unfortunately, this is a necessary evil - their rental space helps to pay for the Civil War event (although I could do without the rock, pop, and polka bands).
On the other side of this circus tent area are the sutlers. One of the best things for the reenactors themselves is this sutler area. It's here where many of the living historians purchase their clothing and accessories used for reenacting purposes. This is where folks can pick up lanterns, period music, paintings, and old-fashioned toys. This is where so many reenactors spend much of their time on this particular weekend!
Then there are the Boy Scouts: these young men are out in force, helping any and all for parking, directions, guidebooks, and even in the first aid department. God Bless the Boy Scouts!
If I had any complaints (yes, there are a few), one would be the reenactor parking. We need a better, more organized area for our vehicles. Parking a large van, truck, etc., on the hill where it slides down in the mud is not my idea of taking care of the reenactors. I refuse to park there - I won't slide down sideways again in an attempt to drive out.
Another complaint the lack of civilians during the battle. For instance, wouldn't it be great to have moms, dads, wives, sisters, wandering out onto the battlefield to find their loved ones wounded or dead, letting out a wail if the worst is found? That would show the patrons a different aspect of the War that many know nothing about.
How about allowing civilians to have a picnic during early battles, as was done in 1861? Yes, that really did happen. They thought of the battles as 'entertainment'... that is, until the battle got too close and they saw (or may have inadvertently become part of) the carnage.
A little bit of realism of a different type. 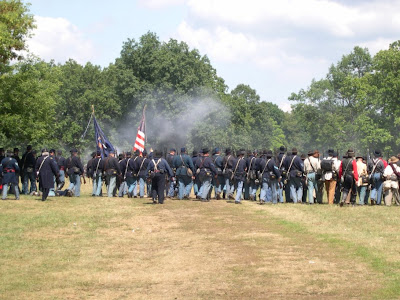 When all is said and done, I feel the really great thing about Jackson is the amount of reenactors that show up - literally thousands, which, between the military and the civilians, gives the patron a well-rounded impression of the era and the War. It is truly a magnificent slice of living history at its finest.
Posted by Historical Ken at 9:01 PM