"The warm glow of Eagle Tavern in Clinton, Michigan, must have been a welcome sight to both traveler and local resident on a cold winter night during the 1850's. This evening, the travel of a merry band of entertainers has been unexpectedly interrupted, and the members have been asked by Calvin Wood, the tavern owner, to "sing for their supper." Join us tonight as you share in the hearty food and the warm hospitality of a less hurried time. Relax as our entertainers delight you and your companions with holiday song and cheer."
(taken from the souvenir menu given to patrons) 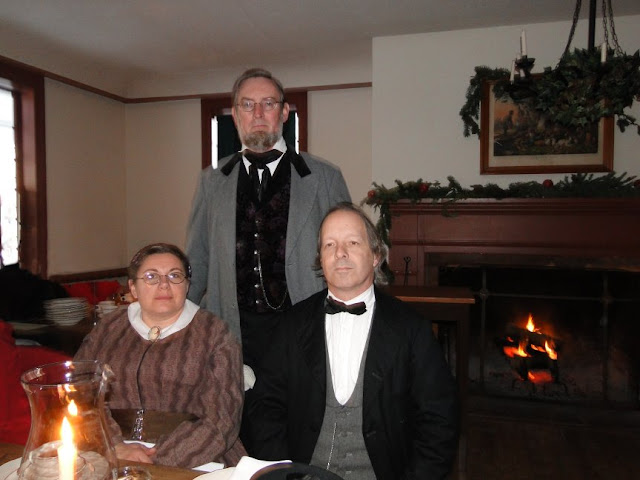 I am enjoying a respite from the modern world at the Eagle Tavern with my wife and our very good friend. We dined here on the evening of December 27

Patty and I had a very special "date" the other night; we went to "Holiday Nights in Eagle Tavern" at Greenfield Village. What a treat that was! As the GFV website proclaims:
"Treat your family to a delectable holiday feast in Eagle Tavern. The "proprietors" of this 1850s stagecoach stop will delight your palette with an authentic holiday meal, served by costumed presenters and enhanced by seasonal décor and live music from the period. In addition to dinner, your package includes admission to Holiday Nights in Greenfield Village."
We haven't done this in many years, due to the cost - it is rather expensive to do the evening Christmas dinner...but so well worth it! Fortunately, I was able to put aside a bit of money earlier this year and surprise Patty with the tickets.
First of all we dressed in our period clothing. It's very hard for us to do something so historical and not dress 'proper.' Our clothing, by the way, is correct for the early 1860's and not necessarily for 1850, the year the tavern portrays. That's OK , however, because we still fit into the atmosphere. And, no, this was not a reenactment.; just us being us.
The tavern is lit solely by candlelight. This, of course, enhances the atmosphere greatly, especially as one watches the sun set and then disappear into the night and only the glow of the flickering flames giving off illumination.
A quartet of carolers, known as Opera Lite, provided the seasonal entertainment. And they were very good! No Rudolph, Santa, or Hippopotamus songs here! 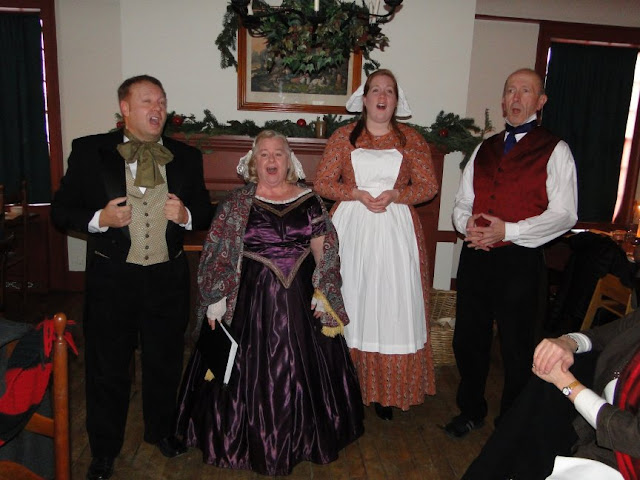 They strolled from table to table, harmonizing wonderfully on such carols as The First Nowell, Bring A Torch Jeannette Isabella, Hark! The Herald Angels Sing, and Jingle Bells - all period correct songs. They did a fun participatory "12 Days of Christmas" and got all of us involved by having folks seated in different sections of the tavern sing the different parts. Our table, and the two tables next to us, for instance, was asked to sing "Three French Hens" for our part. We spiced it up by waving our napkins as we sang. The group that had "Twelve Drummers Drumming," however, banged on the tables, and the "Eight Maids a Milking" became "Eight Maids a-Drinking" - the maids being the waitresses who worked at the tavern - and they held up drinking cups as they sang - and so on for each group. It was great fun.
"That's fine and dandy, Ken," you say, "but, what about the food?"
The food?
You tell me: apple sauce, cranberry relish, butternut squash soup, pork & apple pie, roasted chicken with cherry sauce, roasted rib of beef with brown sauce, brussels sprouts, buttered carrots, herb roasted red potatoes, and a French charlotte with vanilla sauce for dessert. Oh, and hot cider to drink.
All very traditional and accurate for a mid-19th century Christmas fare.
I am here to tell you that there are not many meals I can say I have ever eaten that was better than this! This is the reason why I continually say that the Eagle Tavern is my favorite place to dine (although during the daytime hours the menu is at a much cheaper rate, but without the evening atmosphere and entertainment)! 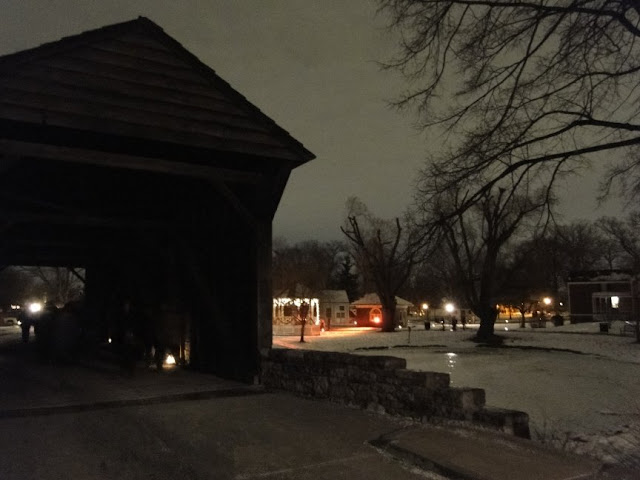 Once the tavern festivities were done, out we went into the still Christmas-y atmosphere of Greenfield Village. Now, I posted a full report of this wonderful event on my Greenfield Village blog (Holiday Nights), so there's no need for me to go into any great detail here. I will say that it is like finding yourself in a Christmas card - a truly festive experience. Patty and I took our sweet time strolling the streets of the Village. Since we were not with anyone else on this particular evening we were able to do as we pleased and went where we wanted to go without worrying about whether our friends were having a good time or not. 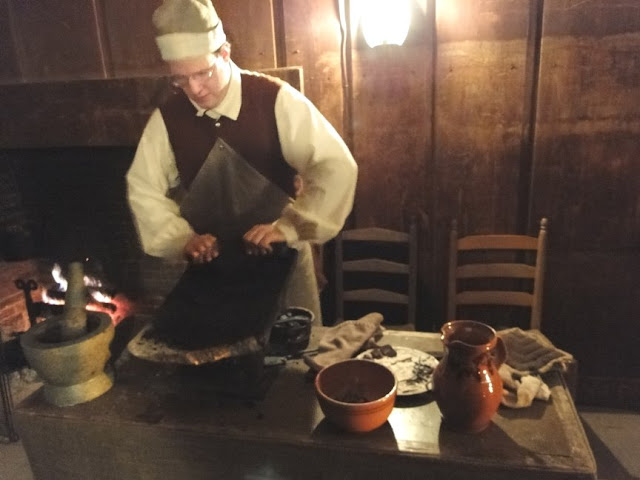 A colonial chocolateer at the Giddings House

Since the chocolateer inside Giddings House was a new addition this year, I wanted to get back there to watch and listen to his presentation - when we went to Holiday Nights a few weeks back, I was so thrilled just to be in the Giddings' kitchen (which is never open to the public!) that I didn't hear a word the chocolateer said! So on this second visit I was able to listen and learn about this craft of another era. Did you know that folks during the colonial times would hire chocolateers to come to their house to make chocolate for special occasions? Imagine hiring out for someone just to make you chocolate! And it was rather expensive to do this. 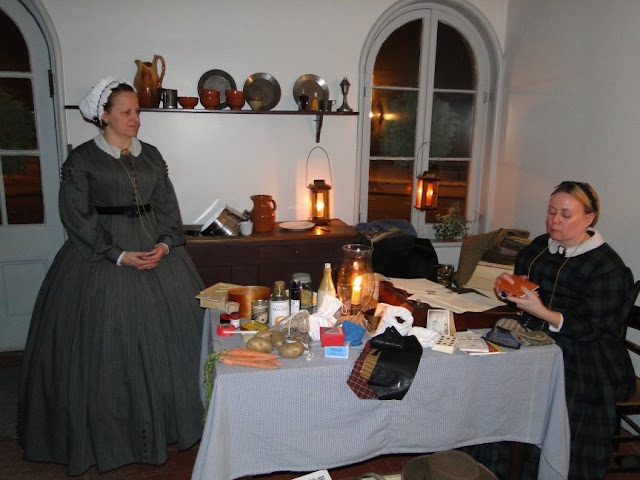 The Ladies Aid Society readies gifts for our boys in blue

We also visited another new addition to Holiday Nights: they had a Ladies Aid Society set up at Smiths Creek Depot. They represented the northern female home front, showing the crocheted and knitted wares, newspapers (Harper's Weekly), preserved food, candles, and other goods to be sent to our northern boys who were off in strange southern lands fighting to preserve the Union. This scenario is in conjunction with the Civil War winter Quarters presentation at the McGuffey Schoolhouse). 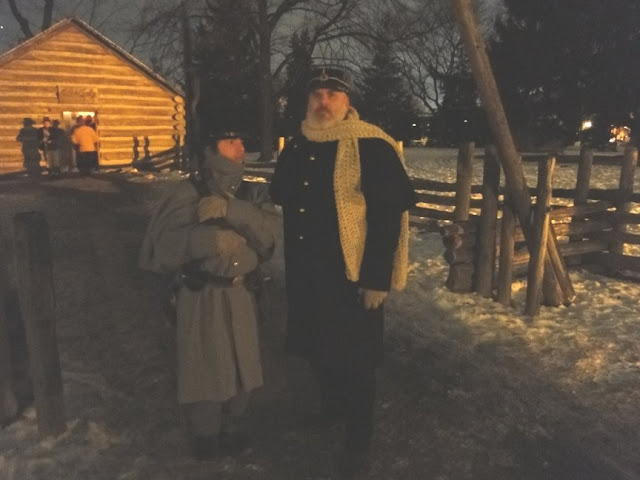 Our boys in blue during winter quarters

A very special moment happened quite by accident; toward the end of the evening, Patty and I were standing in the cold near the Logan County Courthouse waiting for the fireworks to begin. Well, looking at my timepiece I saw that we had nearly 20 minutes yet to go so I suggested that we go inside the courthouse to get out of the inclement weather. I have been in this building hundreds of times but never during Holiday Nights, so weren't we surprised when the candle lit structure had a warm fire crackling in the fireplace and a fine period musician, Neil Woodward, performing the beautiful carols of the season on the concertina and mouth organ (he had already put his fiddle "to bed"). 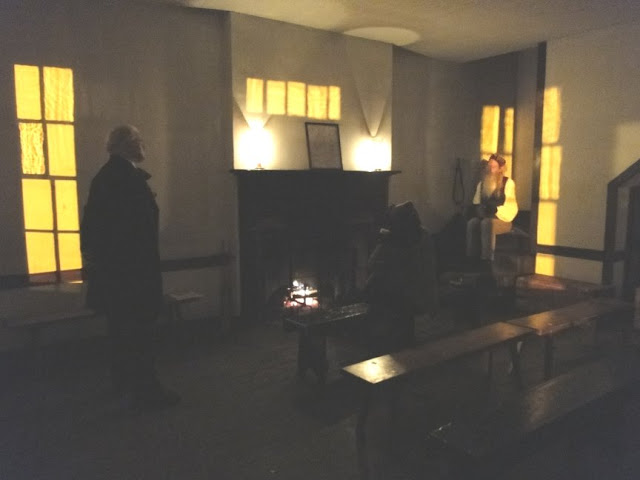 So there we sat thawing ourselves - especially our frozen toes - near the hearth, listening to this wonderful period Christmas music...a real highlight for us, and a lifetime memory.
It was difficult to leave that cozy place, but the fireworks were about to begin. We had never stayed at Holiday Nights completely til the end before now - we usually left before the closing festivities began to beat the traffic - and I could kick myself, for the end-of-the-night revelry proved to be just as enjoyable as any of the other activities. Just before the fireworks began we watched as the period-dressed presenters of the Village all walked in a line across the village green (now covered in snow) carrying lanterns while the church bell tolled in the background - quite a sight to see and hear! 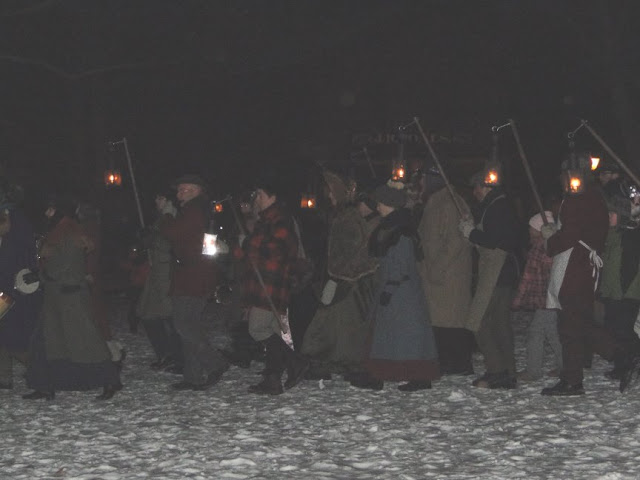 It was quite a sight to see the Greenfield Village employees marching across the snow-covered village green, lanterns in hand and on hooks

Then the group caroling began, and the thousands of visitors were asked to join in to make a joyful noise as one. It was beautiful.
And yes, the fireworks were nearly as awesome as the show they have on the 4th of July!
What a grand time we had!
It's unfortunate, however, that the Village is now closed until mid-April.
*sigh*
But, that's one of the reasons why we decorate our home in the way we do, with the antiques, etc., trying to replicate some of the homes we have seen inside the Village. 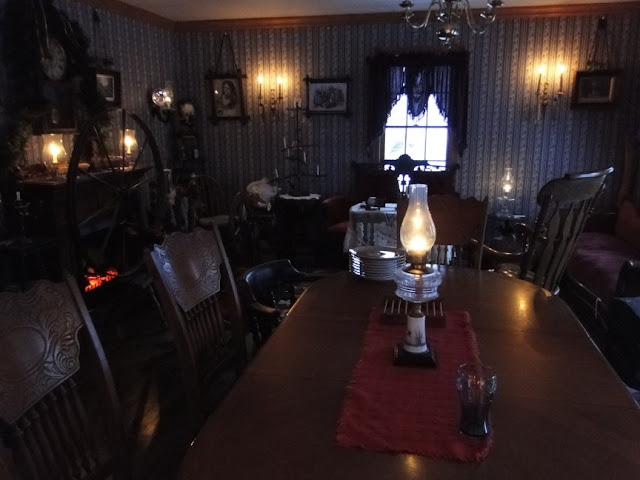 Our "parlor" this Christmas

It's not perfect, but it sure is a welcome sight to both traveler and local resident on a cold winter night! 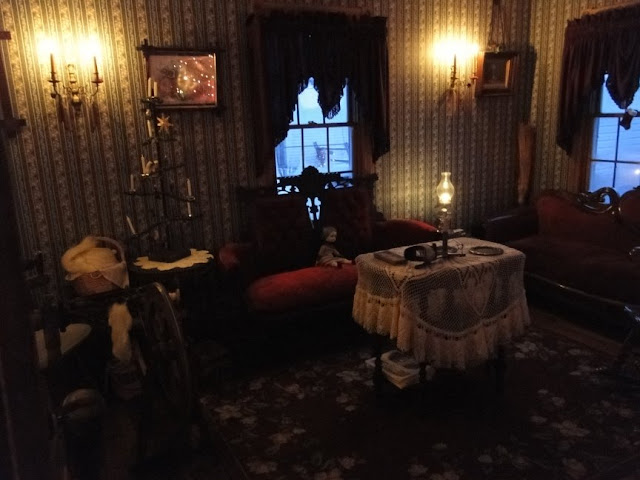 Another parlor photo: this is my solace - my respite - away from modern society as the need to escape arises

And it certainly helps me when I feel the modern world overcome me!
Happy New Year everyone!

GREEN with ENVY! Oh, how I wish we lived close enough to dine at the Eagle Tavern!

You should come up to Michigan for a long weekend - of course now you'll have to wait til spring to go to the Village.
It would definitely be worth your while.

Your blog is wonderful! Love all the photographs. Wish the living history out here was up to the level you have! Have a wonderful New Year!
Take Care,
Robin

Thank you so much for the kind words Robin!
I wish you a happy new year as well! Be safe in your time travels!

I was thrown by the new name. Giddings still has the secret passage through the closet across from the door up to the second floor bedroom? lol!

I haven't seen it but I heard the secret passageway is still there.