This is a Time of Joyfulness, and a Merry Time of Year

So, as you probably already well know, the Christmas Season is a pretty special time around our home. We love this time of year and try to celebrate it for all it encompasses: family, friends, tradition, music, and, of course, Christ's birth.
I have always enjoyed the Christmas Season. Even as a young teen, when blase' boys aren't/weren't supposed to like such un-cool things, I continued celebrating unabated. And, now that I am a full-fledged middle-aged adult, I still celebrate the Christmas Season! Only now I can do it as I please. If you have read the few postings previous to this one you know that my season begins in full at Thanksgiving and continues through early January.
And because we shop mostly on line, I don't worry about the awful malls, rude people who make gift-giving a chore, and hippopotamuses for Christmas! 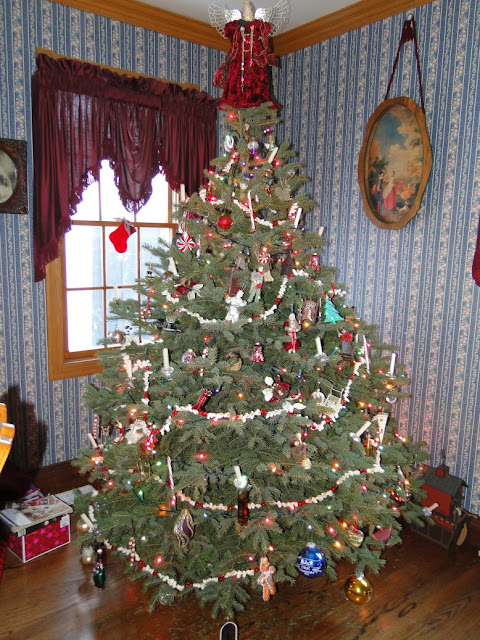 I admit to succumbing (is that the right word?) to the rituals of hanging greenery inside our home, which, although some may disagree, I feel is no different than bringing flowers inside from a garden. We all enjoy decorating our tree with the many different styles of ornaments we have collected over the years. Yes, we still hang some of our original ornaments from 25 years ago when Patty and I were first married, as well as a few from more recent times.
Another tradition is setting up our original manger scene that we purchased during our first Christmas together all those years ago.
An interesting aside to manger scenes happened to me few years back when, while shopping in an antique shop I found the very same nativity collection my mother had originally bought back in 1950. Her original, of course, was long ago destroyed by us kids playing with it and recreating Jesus' birth (well, I did anyway!). So, here I came across the exact same one, only in mint condition, and I absolutely had to have it! 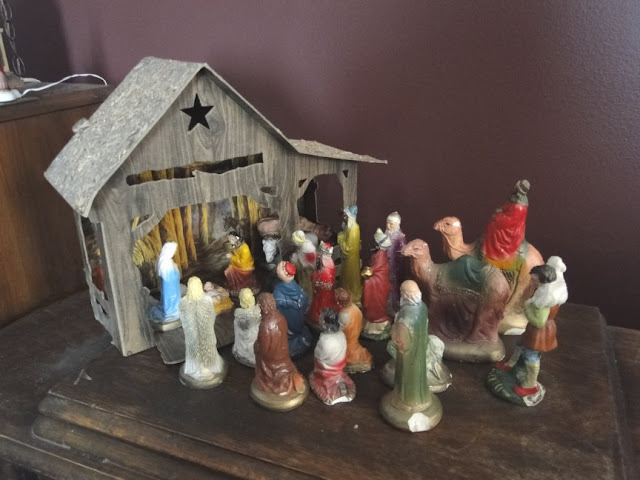 The same make and year as my mother's nativity - around 60 years old. The figures are from my grandparent's and my mother's original.

My visiting siblings all reacted virtually in the same manner when they saw it: "Hey! That's mom's!" Lucky for me my mother still kept the tiny Mary, Jesus, and Joseph, as well as multiple kings, angels, shepherds, and manger animals from her original set. Many of these figures also belonged to my grandparents as well, their manger set up long gone. Oh, the figures are a little chipped, but wonderfully intact for the most part.
We also enjoy the Holiday Nights Christmas event at Greenfield Village every year. In fact, we usually attend multiple times! Sometimes we dress in period clothing, depending on the weather, and other times we are in our modern garb. We attended last weekend and did all of the 'touristy' things such as taking a horse-drawn wagon ride. I usually try to let as many friends know about Holiday Nights and always end up with quite a few who want to go - this year I purchased around 70 tickets! No, I didn't treat! 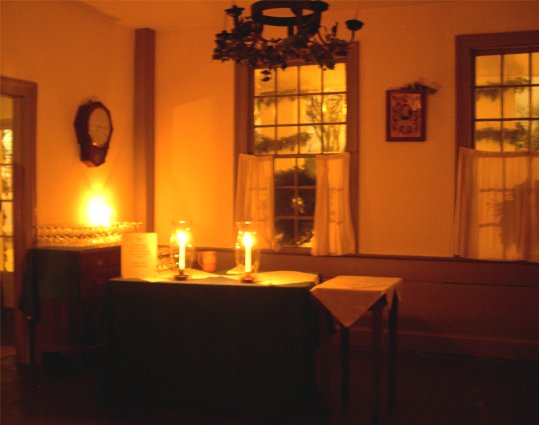 Christmas in the mid-19th century at the Eagle Tavern - and this is the waiting room!

By the way, for a special treat, I am taking my wife to an 1850's Christmas dinner at the Eagle Tavern. It will take place a couple days after Christmas. We haven't done this in years and, considering how rotten our economy is, I don't know when - or if - we might be able to do this again. Plan on a full report posted here...
Another fun tradition is watching the various versions of "A Christmas Carol." Having read the book yearly for decades, I have a pretty good idea on how true the movies are to Dickens' vision. Most are pretty fair, some much better than others, but all are enjoyable in their own way. Even the Muppet version. I really like the Jim Carrey version from last year (except when Scrooge shrinks down to the size of a mouse for a short bit - not sure why they did that). And the George C. Scott "Carol" from 1984 is excellent. Alistair Simm does a phenomenal job in the 1951 version as well. By the way, the best Cratchit family award goes to the Patrick Stewart version from 1999 - really authentic and the way I pictured they would be like. 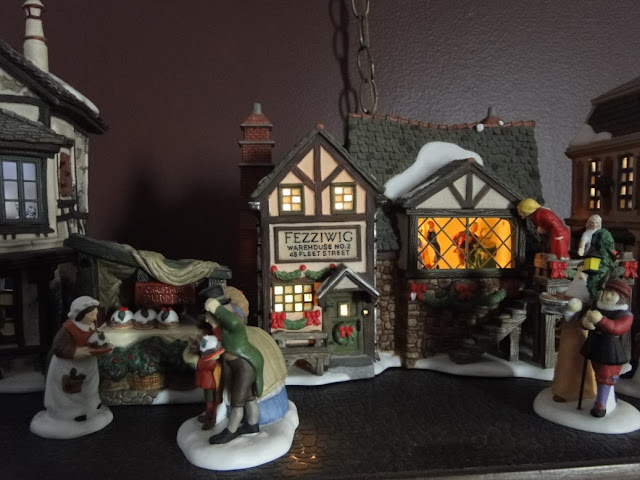 I collect the Department 56 lighted houses - the Dickens series, of course - and have quite a few. I really don't have the room to set my whole collection up, so this year I have a mere seven houses and a few figurines on our piano/shelf. Just enough to give a smidgeon of the story. I really don't buy them anymore because I have no room to set them all up. Maybe one day...when the kids are grown and moved out...which I hope is a long way off...
Then there is the period vocal group I manage/arrange/MC: Simply Dickens. Formed by my oldest son and a couple singers nearly 10 years ago, Simply Dickens has progressed from a middle school trio through a high school quartet and quintet, and is now a quintet of adults of varying ages (young as 22 - old as 49), including my son. And because the group is no longer a quaint collection of kids singing songs of Christmas, they must strive to be different than the usual gang of carolers one sees at every gathering. Although they have always performed old world Christmas carols, they now specialize in that genre. Songs such as The Boar's Head Carol, The Gloucestershire Wassail, The Holly Bears a Berry, All You That Are Good Fellows, Riu Riu Chiu, Silent Night sung in German and in English, with the audience joining in, and the original melody of O Little Town of Bethlehem, among others. Because most listeners do not recognize many of the tunes, I act as MC and explain the history of each carol sung. 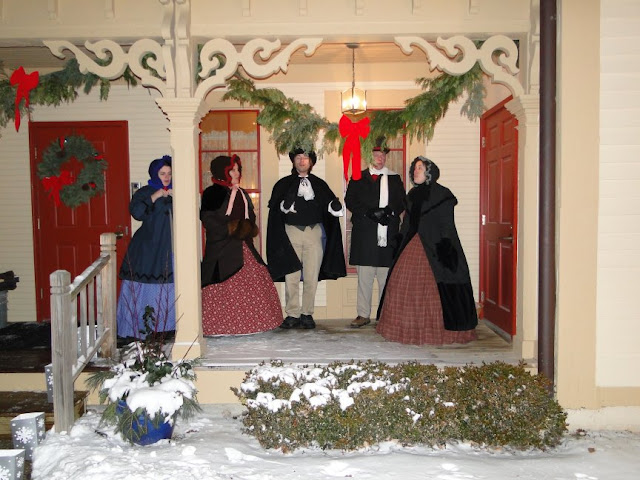 Simply Dickens at the Livonia Greenmead performance. Yes, it was bitterly cold!

I am very proud of this group, for we just received our first real newspaper write up/review from a recent performance in Plymouth, Michigan.
Here is a snippet:

"Once the show began, the crowd listened in rapt attention to the harmonized voices singing both familiar and unknown Christmas carols.

John Fitzgerald and his wife Fay are new Plymouth residents, having only lived in the area for six months. Their favorite song the group sang was "Silent Night," because they like how everybody was able to sing. Fitzgerald said he thought the show was great, surprisingly.
"It was fantastic, I was pleasantly surprised," he said. "I thought it was a barber shop group, I was misinformed. It wasn't until we were sitting in the parking lot and Fay said it was old-fashioned Christmas carols. And I thought, well this is going to be boring. I was really surprised." "
Did I say proud? How about elated??
December 2010 has been our busiest season yet, with performances weekly+, all around the greater Detroit area.

Christmas has become even more special than I ever could have imagined. Between the decorating, the music, the events at Greenfield and Crossroads Villages, and the Civil War era at Christmas living history we did on the farm, I would say I am blessed with the best the season has to offer. It took a lot of time and effort, I must say, to get it where it is for us, but it was well worth it.
It's nice enjoying Christmas without thinking about malls.
And hippopotamuses. 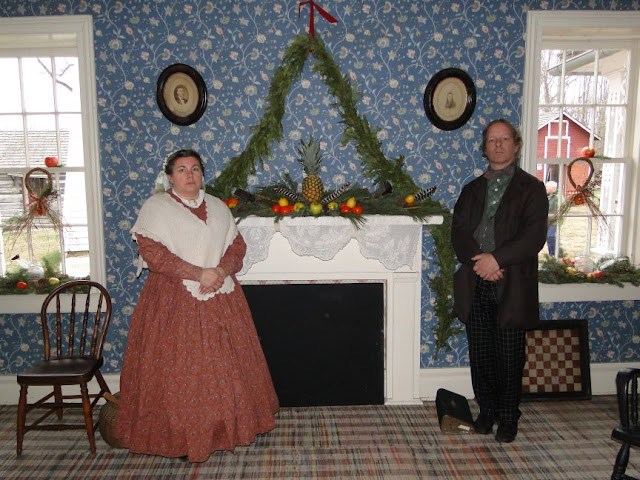 Merry Christmas from Patty and I to all of you!

Ah! all of our manger figures are broken. :D We have them glued together. I'm guessing they probably make them out of plastic now?

Ken,
I JUST finished putting out my "paste" or plaster manger scene! I cried when I inherited it from my Grandmother. No matter how chipped and humble the figures get, it is an absolute treasure to me.

I'm not all that surprised to see that you treasure one, too.
April

April,
Is it the same as what I have?