The Many Wonders of Modern Technology 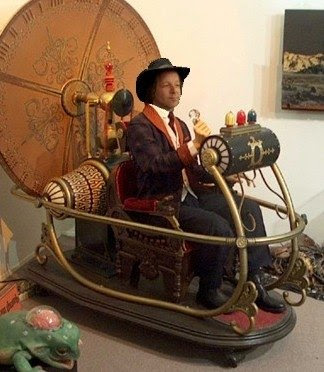 (Many thanks to my friend and fellow reenactor, Randall Perry, for the doctored pic of me in a time machine.)

So, here we are, as of this writing 2011 is just under 12 hours away.
2011! Think of it! I remember as a teen back in the 1970's thinking how we'd have colonized the moon, maybe even Mars, and be driving hover cars by this time!
Talk about fantasy...nothing of the sort happened, eh?
Instead we seemed to have gone in a different futuristic direction: home computers, computer phones, digital music (thousands of songs on a tiny piece of plastic??), digital cameras, home printing, instant communication and picture sharing, movie screen-type televisions with amazing clarity, digital movies...how our everyday home lives have changed!
My father passed away in 1982, and I use his year of passing as the dividing line for past and future; what would my dad have thought of our many different "futuristic" items in comparison to what he had already known. For instance, I know for a fact he would have loved big-screen tv's - he was an avid tv watcher and really enjoyed it when one of the major networks (only three at that time) would show a 'world television premier' movie, or if one of the smaller local stations would have a John Wayne western week. For him to see them in Blu-Ray on a 50" plasma, for example, would have made him the happiest of men!
But, for me, an amatuer (for I am not accredited) social historian and a passionate lover of living history, what of our modern 21st century conveniences do I find most appealing...?
Well, for one, I love the home computer. It has allowed me to meet other people from around the country who have the same interests as me (read: history), and one can share information as one never could before. I know my social history research, as well as family history research, wouldn't be anywhere near what it is today if it wasn't for the internet. Oh, I realize everything must be checked and double-checked, but most info I have found to be pretty accurate. In all honesty, some of the most accurate information seems to come from fellow bloggers! Yes, bloggers really seem to love to share their findings with a willingness to accept other thoughts and ideas as additions. And the photos that accompany most blogs are awesome!
Speaking of pictures, the home computer has also made very simple the sharing and exchanging of photographs, whether it be through e-mail or through networking sites such as Facebook. And speaking of pictures, I absolutely LOVE digital cameras! Think of it: I now know immediately how my pictures turn out right after snapping them. And then, I can download them to my computer and print them however I would like, all within minutes of taking it! And super high quality digital photography is here and continues to improve all the time.
Now, let's jump to music: have you heard any of the remastered Beatles CD's that were released in the fall of 2009? I am a total Beatles fanatic - a true fan - and have been since I can remember (I was nearly three when they first became popular on these shores). In all these years I have never heard such clarity and fullness coming from such old (40 to nearly 50 year old) recordings. They truly sound as if they were recorded yesterday (ha! get it??), the quality is that good!
How did they do that with such ancient recordings?
With original producer George Martin at the helm, the folks at Abbey Road studios digitized the Beatles original recordings and, through the magic of computer technology, were able to isolate each instrument and voice, clean them up, boost the quality, and put it all back together. No, they didn't change the sound in any way, but instead improved the quality immensely.
It's not just the Beatles that we hear this ultimate quality in sound. They have recently remastered music by the Moody Blues, the Doors, Led Zeppelin...and I welcome the day when one can hear original Glenn Miller and Tommy Dorsey recordings in the same vein.

As for family history, most of my work has been done manually: heading to the nearest family history center, snail mail, and phone calls. But, I have subscribed (periodically) to ancestry.com and have found many other links to my family (census reports for my ancestors siblings, for instance) that I may not have had the inkling to do otherwise. However, the connections I have made with other new-found relatives researching the same family line has made each of our family history research that much - extremely - easier. The best part is having a questionable ancestor's link proven by what another has found that you may have not noticed. This just recently happened to me - within the last two weeks, in fact - and I had sent/e-mailed to me copies of the estate papers from 1813 of my 4th great grandfather, listing his possessions at the time of his death.
How cool is that??
That fast - an e-mail, an answer, and - bam! - it's here.
Now, this all may surprise you, knowing I am a living historian. If you have noticed, though, most of what I have written here about modern technology is history-based. In other words, I use today's tech to take me back to yesterday. You see, if it wasn't for the internet, my quality and accuracy as a living historian wouldn't be anywhere near what it is today. The original photographs one can find on line, the authentic sutlers, as well as social history information is beyond a scope I would have had 25 years ago! Instant networking with others who have the same interests have made my time-travel experiences that much more real.

I welcome the future that enables me to travel back to the past, that allows me to make new friends, and can keep me connected instantly to loved ones many miles away.
See? There is some good in the future...
Now, back to the past I go...Happy 1861 everyone!

Many people cannot drive cars safely on the road, can you imagine what that would look like in the air? :D

I always giggle when I read this weather book that was my uncles from when he was a kid and in the first few pages it says "Maybe even one day, man will reach the moon!"

Ah! They'll never make a ladder long enough to reach the moon!
Thanks for sharing - I love it!!

Greetings Ken,
You asked me about the TimeWrappian Page at Ning. Well, sad to say, it closed down. Here is a fun group of Time Wrappers. Enjoy.
http://grou.ps/timewarpliving/home