I really, really enjoy wearing 1770s period clothing. Yes, more than wearing Civil War era clothing. And when I can be surrounded and immersed in buildings that were around during the time the clothing was fashionable (rather than at a reenactment), well that just sort of becomes the cool whip frosting on the cake.
It's just a shame that there are only a few reenacting opportunities for me to wear the garments here in Michigan;
there are plenty more occasions to don the appearance of living in the 1860s /Civil War era, however. And as you know, I grab those moments quite frequently.
But because there are far fewer events of the 1770s in my general area (right around a half-dozen or so), it took me a while to finally spend some research time and cash on such clothing knowing that it may only be worn a few times a year. In a way, it hardly seems worth it, when you really think about it.
But I am not like most people.
I will grab any and every opportunity that comes my way to throw on my shirt, waistcoat, coat, breeches, cravat, clocked stockings/hose, buckle shoes, and tricorn (or cocked) hat and head off to Greenfield Village (or anywhere else historical)...just because.
In fact, I very recently did just that during the fall harvest weekends at Greenfield Village, and the best of these photos taken I put here in this week's post. You see, for two weekends in a row in late September and early October - the time of the fall harvest - I donned my 1770s finest, grabbed a few friends, and off we went for a photo shoot. Well, not just a photo shoot - we also really enjoyed spending time around all of the traditional autumn activities that takes place this time of year inside the historic open-air museum.
Usually my wife and/or a few friends will also 'dress' and join me on such an excursion. Unfortunately, it was not to be this time. But I hope what you see here doesn't make me seem like I'm vain or anything of that sort that I'm in so many of the photos, for I am not that way at all. What I wanted to do was to put myself into period scenarios strictly out of my love and want for being a part of history.
Does that make sense to you?

Anyhow, there are photos of others as well...and what I have presented here are my favorites of what was taken over the two weekends.
Hope you like them


After an enjoyable delight, I asked if I may step into the kitchen to thank the servant for doing such a fine job in her cooking expertise. Though a bit befuddled, Miss Giddings honoured my request.

The Giddings' servant girl made Black Caps in this way: 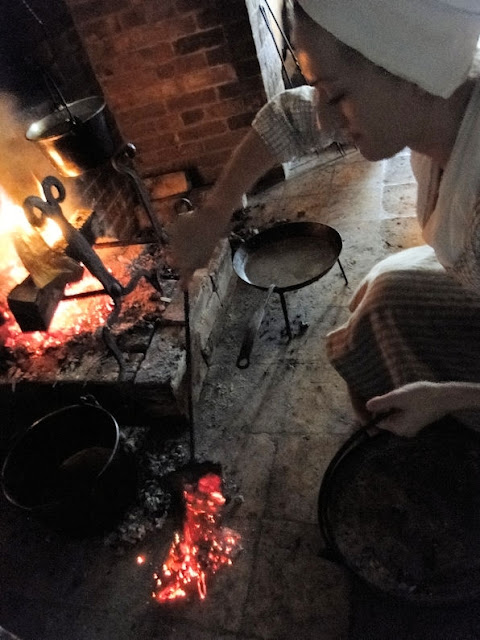 Cut 12 large apples in half and take out the cores and place them on a thin patty pan, or mazarine, as close together as they can lie, with the flat side downards; squeeze a lemon in two spoonfuls of orange-flower water and pour over them; shred some lemon peel fine and throw over them, and grate fine sugar all over; set them in a quick oven and half an hour will do them. When you send them to table, throw fine sugar all over the dish.
From The Art of Cookery Made Plain and Easy by Mrs. Glasse (from 1776)


While the ladies of the house were very busy cooking and preserving food, Samuel had his own chore outside making a goodly amount of beer for the winter.
Beer and ale was a major dietary staple in the colonies. Literally everyone partook. It was the common item which spanned generations; from cradle to grave everyone drank beer. Infants were fed beer and it was especially recommended for nursing mothers. Farmers, laborers, merchants, lawyers, and craftsman all drank beer. It was a common thread in all their lives and this beverage would even play an important role in the formation of government.
It was not uncommon for drinking to begin even before breakfast and it continued with every meal throughout the day.
Now, in the silly introduction of the all-knowing History Channel's "Founding Fathers" series, a so-called "historian" makes a point to state something along the lines that it was a wonder the Founding Fathers could even stand up with all the beer they drank. Well, hey! Guess what? Although there were those who drank to get drunk (just like in the 21st century), most in the colonial times drank beer because it was healthier than water. They did not drink to get inebriated.

Just correcting another myth that tries to make our founding generation look bad.
Ben Franklin’s favorite type of beer could have been similar in gravity and strength to the modern version of an Old Ale (1.060 to 1.086). Franklin’s own writings refer to, “the type of strong, harvest-time ale, or October ale.” Yet, his regular drink couldn’t have been excessively strong because he was known to have intellectual discussions in Taverns while, “lifting a few pints of ale,” and Franklin felt (along with many of the time) that ale was a healthful tonic if consumed in moderation.

Brewers in colonial times took the mash they had created, which had the consistency of oatmeal, and dumped it into a sawed-off whiskey barrel. The modified tub acted as a sieve, filtering the sugary liquid from the grain. Modern brewers pass the mash into a device called the mash/lauter tun for straining.


The colonial brewer returned the strained liquid to the boil kettle, or the copper as it was called, for a 2-hour boiling. He added hops, chilled the brew, sprinkled it with yeast, and drained the final product into wooden kegs. The brewer then placed those kegs in a cellar for three weeks to a month.
Yeast is added, which helps turn the sugar from the malt into alcohol. 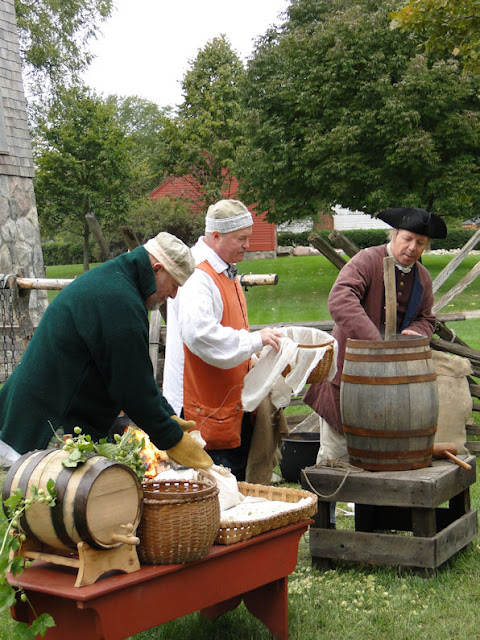 Social historian from Camden, New Jersey, Richard Pillatt, tells us a story of beer's importance in our history:
"After we announced (that we were doing a historic beer-brewing demonstration) this summer, I was in a nearby restaurant eavesdropping on some people who were discussing our publicity, and one of them asked the other, 'what does BEER really have to do with history?' Well, in terms of daily life in 18th-century Camden County, one word easily answers that question: 'Everything,' I said. Beer played a central role in the social, economic and political life of almost all our regional ancestors. It provided daily nutritional sustenance, it was made from the crops that they grew and bought and sold in huge quantities, and it was the key lubricant in the networks of local taverns that were the culture's primary social and political venues."


Rather than drive, it was into the coach I went to head back from whence I came. The condition of the roads were not of a high order, and as we wound snake-like over hill and dale, through thick woods and meadow land, riding in the coach was like a ship rocking or beating against a heavy sea; straining all her timbers with a low moaning sound as she drove over the contending waves.

To make an apple pie from a 1776, make a good puff paste crust, lay some round the sides of the dish, pare and quarter apples thick, throw in half the sugar you design for your pie, mince a little lemon peel fine, throw over, and squeeze little lemon over them, then a few cloves, here and there one, then the rest of your apples, and the rest of your sugar. You must sweeten to your palate, and squeeze a little more lemon. Boil the peeling of the apples and the cores in some fair water, with a blade of mace, till it is very good; strain it, and boil the syrup with a little sugar, till there is but very little and good, pour it into your pie, put on your upper-crust and bake it. You may put in a little quince or marmalade, if you please.
From The Art of Cookery Made Plain and Easy by Mrs. Glasse (from 1776)

The coach dropped me off at the tavern in town. As much as I enjoyed my stay in the autumn time of year in the 1770s, I knew it was time for me to journey through the continuum of time and space...back to the 21st century...to rejoin my family.

Who knows? Maybe next time they'll come with me. And if we find a cozy little saltbox house that we can call home, perhaps we'll stay...

But I plan to travel back in time, once again, to search out more eighteenth century adventures. Maybe at Christmas tide...
Anyway, I hope you enjoyed this little autumn time-travel excursion to the colonial times. I certainly enjoyed travelling there. As mentioned at the top of this post, if I have an opportunity to wear my colonial clothing, I will take it...even if I am the only one wearing such clothing!
Until next time, see you in time - - -
(For a more extensive "tour" of harvest time in the 18th - and 19th - century, please click HERE)

Many, many thanks to Ian & Carrie Kushnir and April Folcarelli for coming out to Greenfield Village with me and taking such wonderful photos. I appreciate it!
(All other pictures - you know, the ones I'm not in - were taken by me).

Fantastic! Thanks so much. I enjoyed every minute of your excursion to the past~
Mary
www.thecountryladyantiques.com