With all of the Back to the Future talk going on due to the anniversary date, my mind is still traveling back in time...further than 1955...or even the old west (the third movie in the series).
And I did, in fact, very recently when I portrayed Paul Revere while my friend, Larissa, portrayed the "female Paul Revere" Sybil Ludington for three groups of 8th graders at a local middle school. We had been talking about expanding our presentation 'repertoire' from a mid-19th century farming family to include the colonial period. Since the sestercentennial of the beginnings of the American Revolution is at hand (the Stamp Act, which many consider the catalyst of the War, was imposed on the colonists 250 years ago this year), we agreed that now was probably as good a time as any to present this oh-so-important period in our nation's history. It helps quite a bit that Larissa is a living historian and also works as a "costumed presenter" at the 1750 Daggett House at Greenfield Village, which has taught her quite a bit about everyday life in the 18th century. As for me, I do colonial living history and have been delving more and more into the world of our 18th century Founding Fathers - particularly Paul Revere - as a reenactor/living historian.
So when the opportunity recently arose for us to do a school presentation - three in one day, in fact - we didn't hesitate.
I had been studying Paul Revere pretty extensively over the last couple of years, so I knew what I wanted to do. And Larissa, my partner in all of this, decided to research Sybil Ludington - the so-called female Paul Revere - to not only shine a light on a female patriot, but to also bring out little-known heroics of one of the 18th century women. We plotted our course, worked out an outline, decided which accessories would be brought, and gave each other lots of encouragement.
We were a little nervous beforehand...okay - - I was pretty nervous while Larissa was fairly calm - - but once we got in front of these 8th graders, everything fell easily into place.
We began our presentations with the teacher reciting excerpts from the infamous poem by Longfellow, "Paul Revere's Ride." Unfortunately, most people don't realize that this poem written in 1861 takes liberties on facts, including the mention of what happened when Paul Revere made it to Concord.
Concord??
Um...Revere never made it to Concord that night of April 18th - he got captured not too long after leaving Lexington and his borrowed horse was taken from him. He ended up making it back to Lexington in time to witness the battle events.
And that's the point where I, as Paul Revere, interrupted the teacher, and asked him where he got such misinformation. The teacher responded with having me tell "my" story in my own words.
And that was where I took over and, due to time constraints, gave highlights of Revere's life: birth, occupation, 1st and 2nd marriage, kids, and then some of the events that helped him to make a mark in history, including the Stamp Act, Sons of Liberty, Boston Massacre, his involvement in the Boston Tea Party, his warning rides before the "big one," and some known and little known details about the evening of April 18th.
I concluded my portion by speaking of all the great men who were my/Revere's contemporaries, such as George Washington, James Madison, Thomas Jefferson, Samuel Adams, Benjamin Franklin, John Hancock, John Adams, etc.
And this was where Larissa, as Sybil Ludington, interrupted me to tell me it wasn't only men who made a difference and helped the patriotic cause, and then she proceeded to tell her tale of duty to country, and how on a stormy evening in 1777, this young 16 year old girl volunteered to warn the countryside of the attack from the British Regulars in Danbury, Connecticut.
It so happened on that April night a messenger was dispatched from Danbury to Col. Ludington, Sybil's father, with the news of the attack, and he reached the Ludington home at approximately 9 PM. Col. Ludington began to organize the militia, but the men were scattered throughout the area in their homes, and it was well into the night. The messenger was exhausted and not familiar with the area, and would not be able to find all of the militia volunteers. Sybil Ludington was very familiar with the area, and left to sound the alert. It is unclear whether she volunteered for the task, or whether she was asked to do it by her father. Some accounts indicate that Col. Ludington had planned the route Sybil would take.

Sybil left for her now-famous ride at approximately 9 PM into the rainy night, traveling 40 miles from her home in what is now the town of Kent, south to Mahopac, and north to Stormville, before returning home near dawn the next day. Sybil not only had to avoid British soldiers in the area, but also British loyalists, and "Skinners", who were outlaws with no allegiance to either side in the War. Some accounts indicate that a church bell was rung in Carmel after she gave the alarm, and that a man offered to accompany her on the rest of her ride. These accounts claim that she declined his offer, but instead dispatched him eastward to sound the alarm in Brewster. 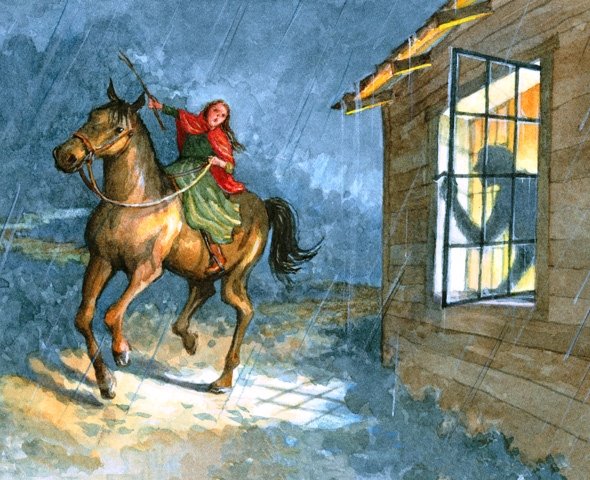 Col. Ludington's troops arrived too late to save Danbury, but fought with the British troops as they left the area.
Quite a fascinating story that history seemed to have over-looked.
But we're helping to bring it back to life.
We also spoke to the kids a bit about every day life and of our clothing during this era in our history, and gave time for a question and answer period.
And, of course, the opportunity for photographs to be taken.
I am very happy and proud of the way that Larissa and I present our Nation's history, and that we can direct it toward any age group, whether they are school age children or senior citizens or all the age groups in between.
Now, what does all of this have to do with Back to the Future?
Today's date, mainly; I felt the need to write something on such an important pop-culture date. Silly, maybe, but it was something I wanted to do. This is my own Back to the Future  way of showing that I have my own DeLorean - - - it's called Living History.

And that means Back to the Future is NOW - - - - -
October 21st, 2015, the date that Marty and Doc (with Marty's girlfriend) journey from 1985 to 2015 - the exact date that I am writing this post - is finally here.
My wife and I saw each of the three movies at the show when they came out, and when we saw the second in the series (where they travel to 2015), I didn't think it was too far-fetched. I mean, 30 years previous (1955) showed amazing technology, from the microwave over to the moon landing to the Voyager 1 and 2 space probes to compact discs to...well, you get the picture. So hover boards, video phones, and 3-D movies (among other things) wasn't out of range, in my opinion (though I didn't think we would have flying cars in 2015 - and I was right).
Well, with all of the predictions that were in that second movie, some of them actually came true, such as big screen TVs and video conferencing, news drones, video glasses, and maybe even the Cubs winning the World Series.
But many, such as the flying car, did not.
Given the fact that we can teach history in this day of hand-held computers (i-phones, smart phones, tablets, etc) and amazingly graphic video games in such an up close and personal way that kids will still find it fascinating is pretty remarkable. And given the fact that we still have swarms of visitors coming to our reenactments tells me that real living history is as strong as ever and that as cool as the technology may present history, actual living historians will always come out on top.
Until next time, see you in time...
By the way, the Back to the Future trilogy is in my top 10 of all-time favorite movies, right there with the John Adams series, Pirates of the Caribbean series, American Graffiti, Gods & Generals/Gettysburg, A Christmas Carol, and the George Washington mini-series.

Posted by Historical Ken at 6:13 PM

Very cool! Do you have a video of your presentation?

In Longfellow's selection of poems, "Tales of the Wayside Inn", it was my great-great-great-great grandfather's uncle who told the poem. Even though the poem was written by Longfellow, the man he describes is real. The Inn was built by his great great something or another, and I love my own personal connection to it and the poem